Disappointed Venezuelans lose patience with Guaido as Maduro hangs on 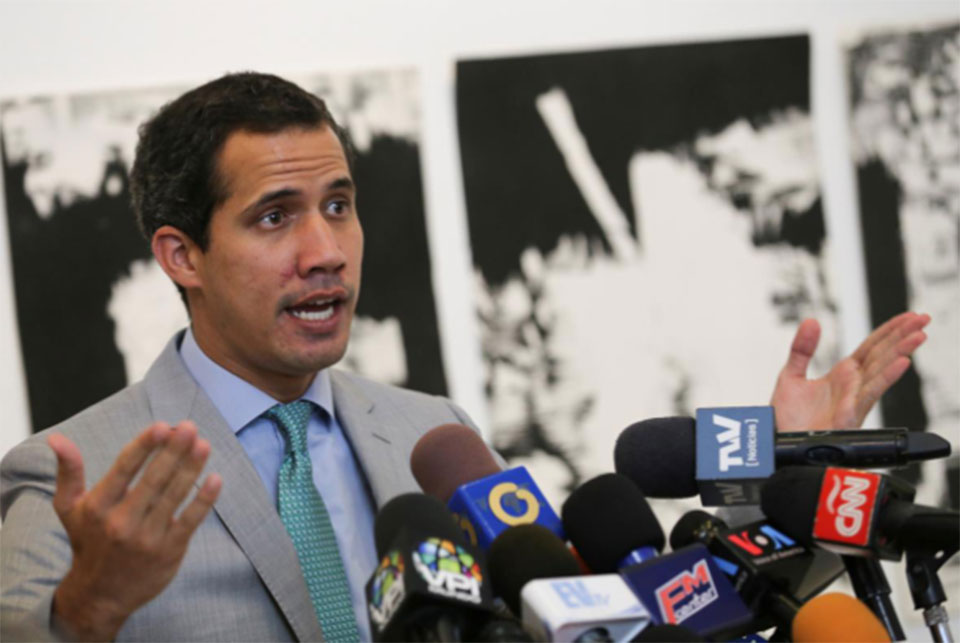 Venezuelan opposition leader Juan Guaido, who many nations have recognised as the country's rightful interim ruler, talks to the media during a news conference before a meeting with representatives of Venezuela's private industrial sector in Caracas, Venezuela June 26, 2019. REUTERS/Fausto Torrealba

CARACAS/PUNTO FIJO, July 2: Four days before Venezuelan opposition leader Juan Guaido launched a military uprising in a bid to oust President Nicolas Maduro, he told supporters at a rally outside the capital, Caracas: “In the next few days, we’ll decide our destiny.”

The 35-year-old, who had risen to national prominence three months before, finished his speech with his usual rallying cry to Venezuelans desperate for the end of 20 years of Socialist rule: “We’re on track!”

Yet after the April 30 insurrection swiftly unraveled, with troops remaining in their barracks and key government officials refusing to change sides, many Venezuelans aren’t so sure.

Interviews with more than two dozen people across Venezuela - as well as fresh polling data - suggest that many people have grown frustrated by the slow pace of change amid the hardships of daily life. Several said they were losing hope that Guaido could dislodge Maduro.

“We’re on track but it’s the wrong track,” said Rafael Narvaez, a taxi driver in the western coastal city of Punto Fijo.

Narvaez said he had been full of hope on April 30 when he saw Guaido appear with military officers in a video posted on Twitter saying it was time to rise up against Maduro.

“I thought that finally the moment had come to recover our country,” Narvaez, 43, said. “Now I’m disappointed.”

Analysts said the most likely outcome now is for the status quo to continue as Maduro gains confidence that his crackdown on the opposition will go relatively unpunished and Guaido seeks a new strategy to keep a weary public energized.

When Guaido, the speaker of the National Assembly, in January proclaimed a rival presidency in a bold challenge to Maduro, he injected new hope into Venezuela’s fragmented opposition. With most western nations saying Maduro’s reelection last year was rigged, Guaido cited the constitution to announce an interim presidency until fresh elections could be held.

Washington backed him and imposed tough new sanctions on Venezuela’s oil industry, with the aim of forcing Maduro and his allies from power.

Maduro, who took office in 2013 following the death of his political mentor, Hugo Chavez, has overseen an economic collapse that has left swathes of the once-wealthy country without reliable access to power, water, food and medicines. More than 4 million Venezuelans have emigrated and the Organization of American States warned this week that figure could double by the end of next year.

Guaido has gained control of some Venezuelan assets in the United States, appointed diplomats overseas and unveiled an economic plan to rebuild Venezuela. But his promises of amnesty have failed to sway the armed forces, which remain loyal to Maduro.

Since the April 30 uprising, the opposition’s momentum has slowed. Attendance at Guaido’s public rallies has dropped and the opposition has held no major protests since then. A march called for Friday will be a litmus test for Guaido’s support.

Maduro, who retains the loyalty of key allies Russia and China, has branded Guaido a U.S. puppet.

With a swift removal of Maduro not in sight, the opposition says it is knuckling down for a more protracted campaign and seeking to build a grassroots organization to press for elections without Maduro.

Yon Goicoechea, a member of Guaido’s policy team, acknowledged there was “fatigue” among Venezuelans.

“We have to fight against demobilization and despair,” he said. “We Venezuelans have to keep consistent in our support for Guaido and be patient.”

To maintain momentum, Goicoechea said Guaido had traveled to 11 of Venezuela’s 23 states and would travel to at least five more this month to motivate his supporters.

Goicoechea said Guaido was focused on expanding a network of Help and Freedom Committees, a program the opposition began in April to organize efforts at a local level – something the ruling Socialist Party has done successfully.

However, attendees say so far the committees have got little traction. Rafael Mora, a 27-year-old doctor and Guaido supporter in the northwestern city of Barquisimeto, said too many Venezuelans wanted immediate change without being willing to work for it.

“We can’t leave all the responsibility just in the hands of a leader, a messiah,” said Mora, who met Guaido when he visited in late May.

Support for Guaido remains high but it has dipped slightly from 61.2% in February to 56.7% in May, according to a June 10 report from Venezuelan pollster Datanalisis. Just 10.1% of Venezuelans approved of Maduro in May, the lowest level for a president since 1999, according to the survey.

Meanwhile, a survey from pollster DatinCorp showed the proportion of Venezuelans who recognized Guaido as the legitimate president had fallen from 49% in February to 36% in June.

Raul Gallegos, associate director with consultancy Control Risks, said their base case scenario was for Maduro to still be in power by the end of the year and for the opposition to lose steam. It did not appear that Guaido had a “Plan B” to dislodge Maduro, Gallegos said.

“We can expect Guaido’s popularity to continue to erode the longer he is not exercising power,” he said.

Venezuela’s crisis has received less public attention from U.S. President Donald Trump’s administration in recent weeks as the White House has become embroiled in a confrontation with Iran and tensions over a trade dispute with China.

When Trump launched his re-election campaign in Orlando, Florida, on June 18, he made just one brief mention of Venezuela, though aides insist he remains committed to Guaido.

Since the April uprising, Maduro’s government has cracked down on Guaido’s allies without significant retaliation from the international community. The Supreme Court has accused 14 opposition lawmakers of crimes including treason and conspiracy, prompting most to flee abroad or take refuge in foreign embassies in Caracas.

Some ordinary Venezuelans interviewed by Reuters criticized Guaido’s decision to send envoys to Oslo for talks with representatives of Maduro’s government.

Instead, they demanded that Guaido shift strategy and request a U.S.-led military intervention - a possibility that Washington has repeatedly played down.

“We can’t get rid of Maduro with votes. It will have to be a violent exit,” said Juan Parra, a 67-year-old teacher in the Andean city of Merida, while he waited to see Guaido speak.

While the most desired outcome for Venezuelans in the Datanalisis poll was negotiations leading to presidential elections this year, preference for a U.S.-led military invasion rose from 9.4% in April to 11.9% in May.

For many Venezuelans, change is just too slow in coming and tens of thousands are leaving the country every week.

“I bet that (Guaido) would change our country,” Andraimi Laya, a 22-year-old former police student, told Reuters as she waited at a border checkpoint to enter Peru. “But, given that it’s all talk and there is no organization, it’s too hard to stay there.”

Induction stove an alternative for people during lockdown
18 hours ago
NA plane departs for Guangzhou, China to bring medical equipment
11 hours ago

'Medics at some private hospitals working without PPE'
19 hours ago

Amid shortage of PPE, National Innovation Centre begins its manufacturing in Bhaktapur
12 hours ago