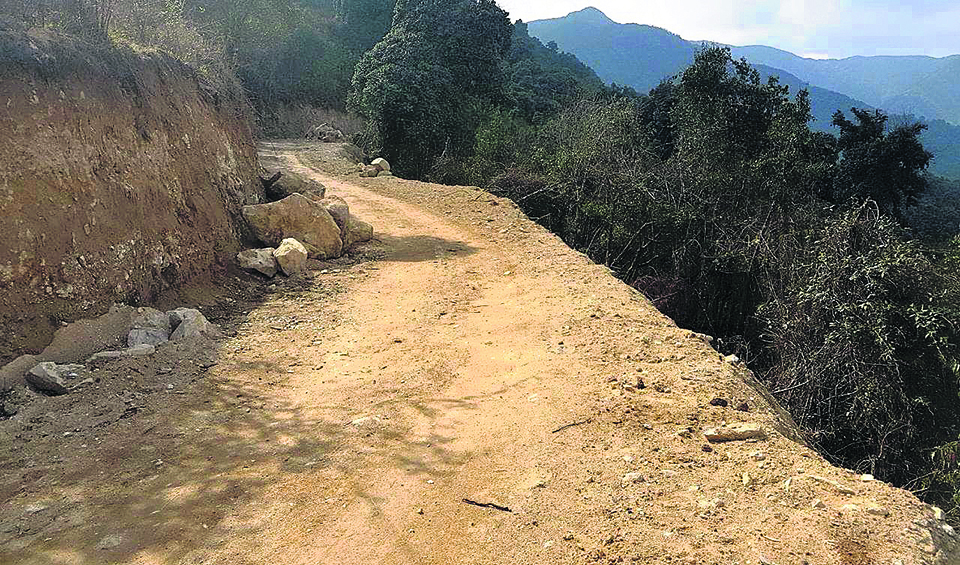 Photo courtesy: Ashok Chhetri An under-construction section of the Sikkim-Chiwabhanjyang road in Sikkim, Indian in this recent picture.

PANCHTHAR, Oct 7: Work on constructing the road connecting Nepal with Sikkim of India is going on in full swing. The Sikkim government is working on Chiwabhanjyang road that will directly link Nepal to Sikkim. According to officials, the project is expected to be completed by the end of December this year.

The road will link Sikkim to the starting point of the Puspalal (Mid-Hill) Highway, which is at the Indo-Nepal border at Chiwa Bhanjyang. The construction of the road had started from from Sokhpakha point of Uttare Bazar of Sikkim and will end at Chiwabhanjyang. According to Ashok Chhetri, a social activist at Jhakridungha village, the road is expected to come into operation this December.

"They are working speedily on constructing the road. We have heard that it will be inaugurated in December. It is going to be a great facility for people of both the countries," he said.

The road constructed by the Sikkim government will establish direct link with eastern part of Nepal. It is expected to boost travel and trade further.

Sikkim's Minister for Urban Development and Housing and Food and Civil Supplies, N K Subba recently asserted that the road has been a high priority for the government stating that it will help boost tourism. "The road is of utmost priority. We expect it to boost tourism," he said.

According to Minister Subba, that government has planned to get complete the construction of the road by December. "The road will reach to Chiwabhanjyang by December." Sounding elated, he further stated that the road is connecting Sikkim to Nepal directly. "Sikkim is getting connected to Nepal directly for the first time. It is a pleasant matter," he said.

Nepal and Sikkim share 99 kilometers borderline. After the construction of the road, business across the border between the state and Nepal is also expected to get a boost. According to the minister, easier transportation will open new avenues of opportunities.

Also according to Chhetri, the road is going to impact people's life in the border areas in more than one way. It will not only bring tourists more easily to Nepal and encourage Nepalis to visit Sikkim, but many other bilateral aspects will also benefit from the road, he noted.

"Even though Sikkim is just near, there are many people here who have not visited the place. Easy transportation facility will motivate people to head for such trips. And it is the same for the people of Sikkim. And when the movement becomes dense, it will create many other types of opportunities for the people on both sides of the border," Chhetri said.

According to Chhetri, the new road will not only link Sikkim and the eastern Nepal, but will link entire India and Nepal. "It is like a new route to India is being opened," he said. "They have said that around 60 percent construction of the road has been completed so far. It seems the road will be inaugurated at the said time," he added.

A local journalist in Sikkim, Prakash Adhikari reported that the people of Sikkim are excited about the route. Tourism sector and other business entrepreneurs have taken it in a very positive light, he said.

Nepal and India has 'roti beti' (of marriage and survival) relationship and this is the same for Sikkim and eastern part of Nepal too. However, transportation to Sikkim was not easy. People have been pressing for a direct road from Sikkim to Nepal. And finally, this is being fulfilled, he said.

According to Chhetri also, people living in border areas were concerned over the lack of a connecting road to Sikkim. Their demand for a direct road to Sikkim was long pending. "Finally the project initiated by the Sikkim government has fulfilled our demands. It has made everyone on both sides of the border very happy," he said.

The road will directly link Panchthar, Taplejung, Ilam and Tehrathum, among other districts. Pilgrims to Pathibhara can now use this route as well. At the southern side of Sikkim, the road will connect to Uttare, Bega, Dentaam and Sopakha , among other villages.