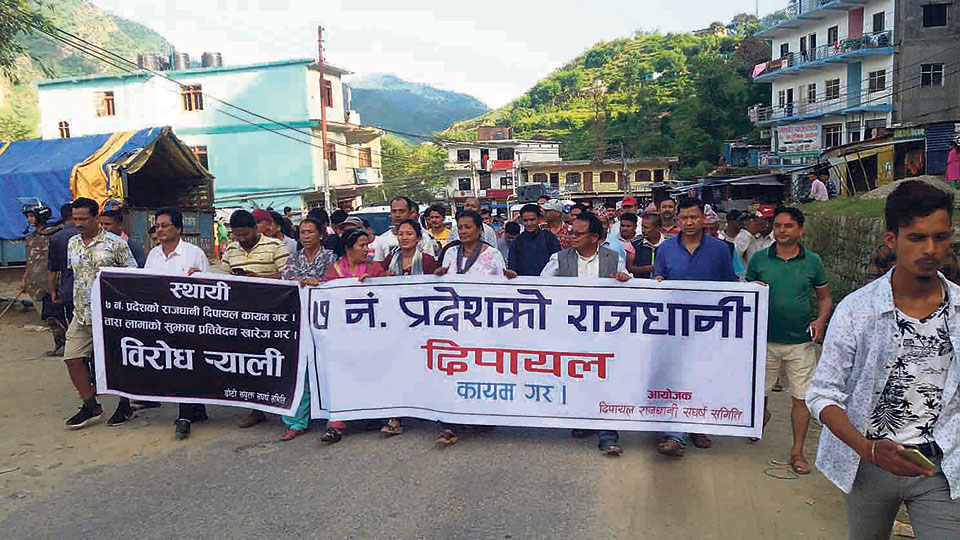 Locals take out a march on Thursday, demanding that Dipayal be declared the permanent capital of Province 7. | Photo: Arun Bam/Republica

DOTI, Sept 28:  With the proposal of a new capital for Province 7, residents of Dipayal are once again taking to the streets, demanding that their city be named the permanent capital of the province.

A special committee coordinated by lawmaker Tara Lama Tamang had submitted the proposal for the province’s name and capital. ‘Sudurpaschim’ was proposed as the name of the province while its proposed capital is Godawari Municipality-4 of Kailali district.

Streets of Dipayal were filled with protestors on Wednesday evening, who termed the proposal as discriminatory. The Protestors took out a torch rally.They have also started putting black flags outside their houses.

The protests continued on Thursday as well. The protestors picketed the District Administration Office in the district headquarters Silgadhi in the evening. They later organized demonstrations in Pipalla Bazaar.

The demonstrators made a round of the bazaar and organized a corner meeting. Majority of the people addressing the meeting demanded declaring Dipayal as the provincial capital.

“Our only demand is that Dipayal be made the capital of Province 7,” said Narendra Khadka, member of ‘Capital Protests Struggle Committee’.

Before setting Dhangadhi as the temporary capital of the province, the provincial council of ministers had determined that Dipayal lacks proper infrastructure to be considered as the capital.

He warned that the residents of Dipayal are ready to intensify their protests if Dipayal is not made the provincial capital.

DHANGHADI, Dec 25: Kailali remains shut today to protest against the alleged slaughters of cows. The shutdown has been called... Read More...

DHANGADHI, Oct 21: Four people have died and 96 others have been infected by scrub typhus in Kailali district this year,... Read More...

Gold price increases by Rs 500 per tola
52 minutes ago