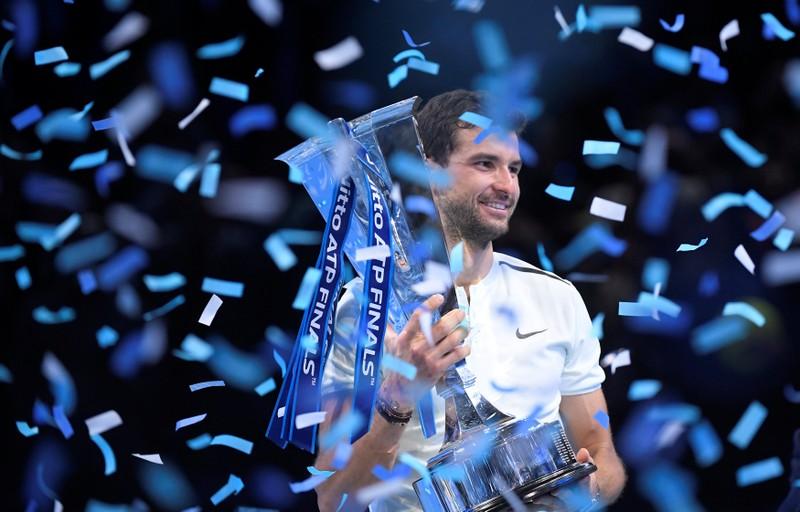 LONDON, Nov 20: Grigor Dimitrov claimed the biggest title of his career and sent out a huge statement of intent as the stylish Bulgarian beat David Goffin 7-5 4-6 6-3 to win the ATP Finals on Sunday.

The 26-year-old recovered from losing his opening two service games to finally get the better of the willowy Belgian player, but it was fiercely-fought two-and-a-half hour duel with Goffin saving four match points before finally succumbing.

Dimitrov’s unbeaten run this week in London earned him $2.5 million while the 1,500 ranking points have catapulted him to end an impressive year ranked third in the world -- behind only all-time greats Rafael Nadal and Roger Federer.

More significantly perhaps, landing the unofficial “fifth” grand slam appears to be proof that the former junior Wimbledon champion, once dubbed ‘Baby Federer’ because of his easy-on-the-eye style, has finally come of age.

“It’s been an amazing week for me,” Dimitrov said on court after becoming the first player to win the elite eight-man tournament on his first appearance in the event since Spaniard Alex Corretja beat countryman Carlos Moya in 1998.

“It’s such an honor to be here and this week has been one of the best weeks I’ve ever had.”

He was still on the court nearly an hour after the match ended, signing autographs for the sizeable Bulgarian contingent who had roared their man to victory.

Yet it was tough on Goffin who, like Dimitrov, was his country’s first qualifier for the ATP Finals.

His substantial consolation, though, was to end the year at a career-high seventh, having become only the sixth man to beat Rafael Nadal and Roger Federer in the same tournament.

He will need to recover fast from the two-hour 30-minute final -- the longest since the event adopted a three-set format -- as a Davis Cup final looms in France next weekend.

Many of the capacity crowd in the O2 Arena had doubtless booked their tickets in anticipation of watching the top two seeds Federer and Nadal go head-to-head but the two newcomers provided a fitting end to an extraordinary ATP season.

Goffin managed only two games against Dimitrov when they met on Wednesday in group play but recovered to beat Dominic Thiem to reach the semis where he stunned six-times champion, Federer.

For Dimitrov, he was quickly a different proposition in the final, using his pinpoint accuracy to keep his gifted opponent under control and he was way ahead on the winner count as he moved 4-3 ahead.

A double-fault at 30-30 followed by a wayward forehand, though, gifted Dimitrov a break and seemed to energize the Bulgarian.

Dimitrov began to assert himself and piled on the pressure when Goffin served at 5-6. Goffin saved four set points, two with forehand winners, but double-faulted on a game point of his own before Dimitrov forced an error to wrap up the opener.

Dimitrov delivers but this time he's ready to stay

Goffin needed just one break of serve to take the match into a decider and looked the more likely winner for a while but when Dimitrov survived a 10-minute service game at the start of the third, saving four break points, it proved crucial.

With Goffin beginning to tire, Dimitrov moved 5-2 ahead with a break and then went 0-40 ahead on Goffin’s serve.

Somehow Goffin survived to extend the contest to another game and saved another match point on the Bulgarian’s serve.

He looked poised to save another one as he stretched Dimitrov all over the court but with the court at his mercy he put an attempted drop-volley into the net.

European Union tariffs on US products comes into force

The European Union is set to slap tariffs on 3.4 billion dollars (£2.5 billion) in American products, from whiskey and... Read More...

KHOTANG, July 30: Construction work on a motorable bridge over Sapsu River along the Sagarmatha Highway has come to a halt. Read More...