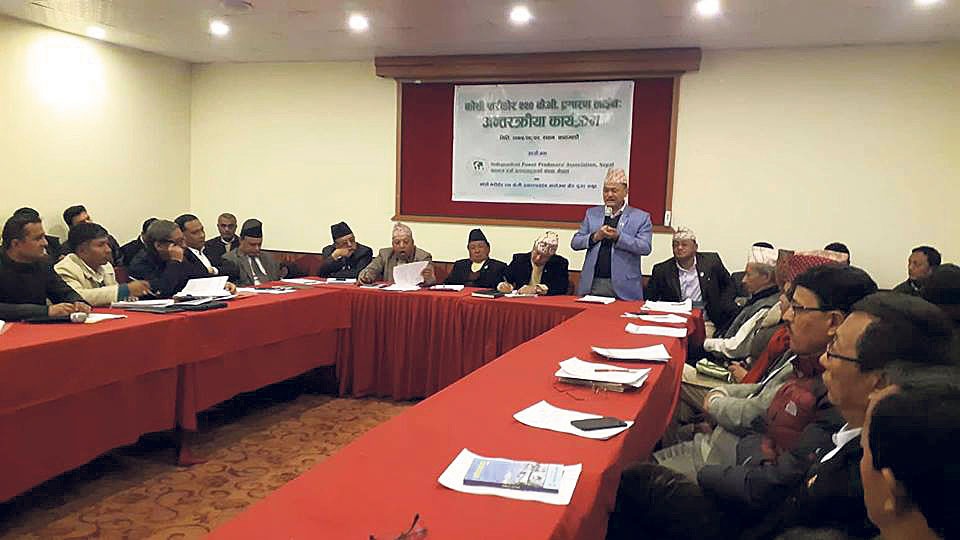 KATHMANDU, Dec 19: Dharan sub-metropolis has obstructed the work of Koshi Corridor Transmission Line, claiming that the double circuit 220 KVA line will damage the potential of paragliding from Chundanda. The local body is also not happy that the 105-kilometer-long line passes through Gorkha Park.

The sub-metropolis has asked the Nepal Electricity Authority (NEA) to change the alignment of the project to avoid both situations.

However, according to NEA's Managing Director Kulman Ghising, changing alignment is impossible at this hour.

The NEA had organized public hearings and also received consent from all concerned local level authorities while preparing the project plan.

Changing designs of new pylons will be time-consuming and the costs will be inflated if the alignment has to be changed now, Ghising said.

Speaking at a meeting of Province 1 lawmakers in Kathmandu on resolving the dispute, Chief Minister of the Province Sher Dhan Rai on Monday asked local governments not to obstruct projects of this scale and political leaders not to take positions based on undue local pressure.

Upon completion, the transmission line, regarded vital for the region, will evacuate energy generated by power plants of several districts including Sankhuwasabha. But with the imminent halting of the ongoing work, hydropower plants that are planning to begin generation within the next year or so are sure to be affected.

Independent Power Producers (IPPs) who want to evacuate power through the line have formed a user group to lobby for timely completion of the project.

Chief Minister Rai said that the line was important for meeting the five-year target of generating 1500 MW in the province. "I will initiate talks at the provincial level and also at the local level to resolve the issue," Rai said.

Basanta Nembang, lawmaker for the federal parliament from Panchthar district, said that the delay in the transmission line may hit under-construction projects worth Rs 100 billion.

"The delay in the development of transmission line will not only increase costs but also risk the loans of banks that have financed the projects," added Nembang.

Rajendra Gautam, lawmaker for the federal parliament from Sankhuwasabha district, criticized both the projects -- paragliding and park -- for being thrown all of a sudden. "These hurdles are artificial and the attempt is to seek compensation to the level people would get from the Indian developer of Arun III project," he said.

The line starts from Sunsari and passes through Terhathum and Dhankuta districts to reach up to Sankhuwasabha.

The project has also suffered obstruction by district forest offices who would not allow cutting down trees despite cabinet approval.

KATHMANDU, Nov 14: Nepal Electricity Authority (NEA) is mulling a hike in electricity tariff at a time when the government... Read More...