Dhangadhi airport shut for a month for upgrading 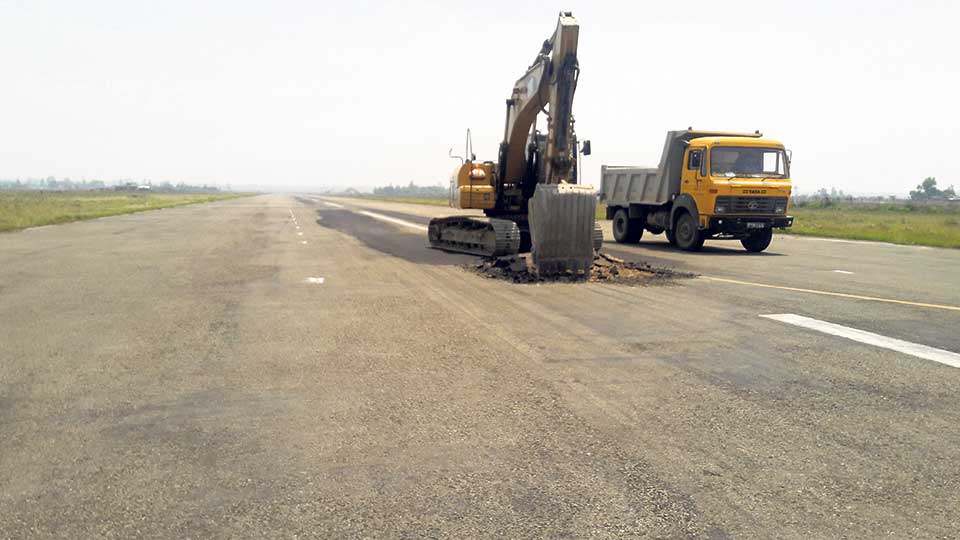 DHANGADHI May 5: The only airport connecting Kathmandu to Dhangadhi of Sudurpaschim Province in the far west has been closed for a month. Passengers who travel to Kathmandu due to health problems like heart attack are likely to be affected by the unavailability of flights. The locals have started protesting after the airport was closed under the pretext of upgrading the runway, claiming that the airport is okay and does not need an upgrade.

President of NCCIFWDR, Shankar Bogati, expressed his disappointment saying, “This is nothing but the mentality that you can do anything to the already underprivileged far west. Renovation happens in each and every part of the world and no where do they close the entire airport,” Bogati added.

The locals are worried for emergency situation such as heart attack, which requires flying the patients to the capital due to the absence of proper medical facilities in the region.

The alternative is to travel four hours by road to Nepalgunj, which also has a high flight cancellation rate. The residents are also showing their concern for local businesses which could come to a halt due to the lack of tourists in the region.

Tourism entrepreneur Sanjay Chaudhary pointed to the blacktopping of the Tribhuvan International Airport’s (TIA) runway by shutting the the airport at night (10 pm-8 am).

Dhangadhi Airport Upgrading Project chief Ratan Kumar Shrestha informed Republica that they are planning to dig the damaged section of the runway and blacktop it to make it thicker. Thy plan to blacktop 800 meters long and 15 meters wide runway. The rest of the area will get an additional layer of six centimeters to the existing five centimeters.

The Dhangadhi Airport Chief Tej Bahadur Buda Thapa said that two daily flights each of Buddha Air and Shree Airlines and three weekly flights of Nepal Airlines Corporation will be completely halted for a month due to the project.

The project is a joint venture between Lumbini, Koshi and Neupane, Khadka, and Koirala construction companies. The total budget allocated for the project is Rs 178.8 million. A total of 1800x60 meters of the runway is currently being upgraded, and an additional 100x70 meters will be developed as hangar.

SINDHUPALCHOWK, July 10: It has been difficult to carry out a rescue operation in flood-hit regions in Sindhupalchowk district as the... Read More...