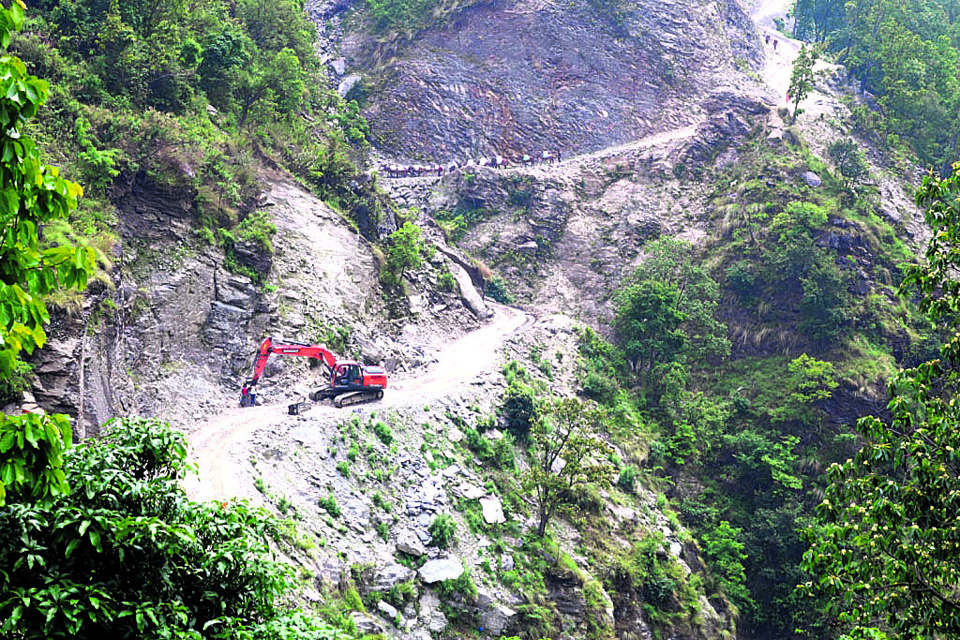 Sarita Shrestha /Republica A dozer working on a rural road in Khaniyabas Rural Municipality of northern Dhading in this recent picture.

DHADING, Feb 12: Priskala Tamang of Khaniyabas Rural Municipality-2 is very happy after her village recently got connected with the road network. Previously, the small settlement in the north of Dhading district was totally dependent on mules to transport essentials like food and construction materials.

“Now the road has reached right in front of my house. It is a great relief as we can hope of lesser troubles,” said Tamang.

Farmers like her are excited that their agricultural produce would finally have easier market access with the road connection. Before the road, the local farmers had lots of wastage on potatoes and cardamom among other agricultural produces due to lack of easy transportation means.

However, the road comes with a cost. During monsoon, haphazard constructions of roads have been triggering deadly landslides. Just last monsoon, a landslide at neighboring Jharlang village scared the locals.

“While the development of roads has brought us many benefits, it has also resulted in destruction and disasters,” said Tamang. “Those roads are not operational during monsoon due to landslides. They are seasonal roads that are functional only during winter.”

Nonetheless, with the development of roads, the villagers have positive things to look forward to. They believe road access eases transportation, which then paves way for further development. Many rural areas are still deprived of access to road that is considered the main infrastructure for development.

While Dhading district is not very far from the federal capital Kathmandu, it still has many settlements that are deprived of road networks and lag behind in development. Many of those settlements are in the northern part of the district. It is only recently after the local elections that the district is seeing an intense focus on infrastructure building.

Road connections are eventually penetrating every rural settlement in the districts. Recently elected local representatives have prioritized road construction in their areas as a backbone for development. While the locals, who have been facing hardships since ages, are happy about gaining access to road, they are helpless against the destruction it brings during monsoon.

During the process of constructing rural roads, disasters have increased in Nepal by three folds. In that view, the settlements are getting riskier each passing day. As a result, the locals are finding it difficult to feel relieved from the progress made in constructing roads.

Settlements in the northern Dhading area that are near the roads, such as Dhadingbesi-Syaltar, Dhadingbesi-Tipling and Aadamghat-Kiranchowk, along with other road sections are always fearful of disasters. Not only these rural roads are in bad shape, but they also have made these areas prone to landslides.

Considering the terrible conditions of roads there, many locals feel that the roads have brought more destruction than development.

On the other hand, locals are also grateful for the benefits the road access has brought to their settlements. Along with easier access to markets, the roads have also provided them with a more convenient way to reach government offices and seek service.

Furthermore, the roads have enabled them the way for quality education, health access, and programs of social service. Many locals expressed wishful thoughts, stating that they want roads to have developed in a managed way.

“I'm very happy for road access but I think it could have been done in a more managed way,” said Ram Kumar Chepang, 32, of Rorang Rural Municipality-10. “The dangerous cliff created during the opening of road track is a big problem at the moment. But the roads definitely have brought positive change to our settlement,” he added.

The locals have demanded to expand the road network only after consulting with an engineer on its sustainability. They want the roads to be made with good technology, quality construction materials, and trained workers.

The haphazardly constructed roads by using dozers are the leading cause of landslides. New roads should be developed by considering their impact on the environment. But roads in this region are mostly constructed without carryout out such assessment.

Furthermore, many contractors use dozers haphazardly without considering its environmental impact. The same is true for ongoing road constructions in Robang, Kosrang, Goirang and Jawang among other settlements. Due to failure to consider the sustainability of their project, the roads built in winter are usually completely unusable during and after the monsoon.

Germs of cholera found in water sources in Dhading

MALEKHU (Dhading), Oct 29: Strains of the bacterium of the cholera were found at several sources of drinking water in... Read More...