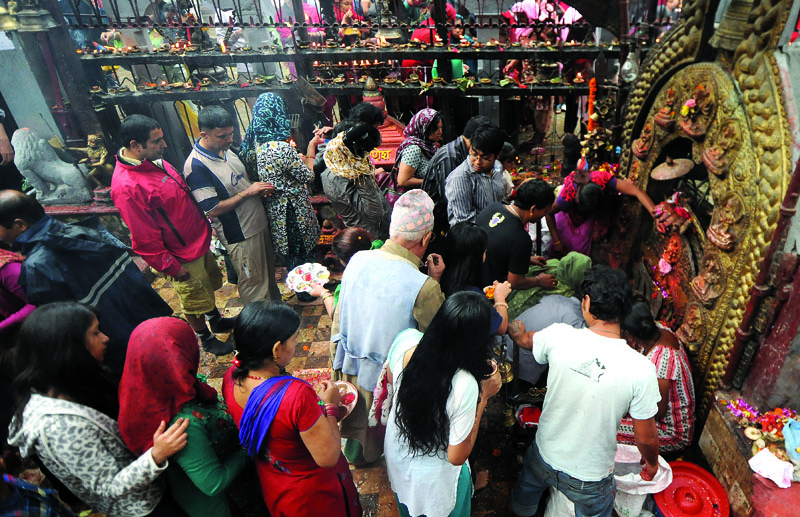 KATHMANDU, Sept 28: Hindus throughout the country thronged the various goddess shrines from early morning today to observe the Maha Astami, the eighth day of the ten-day long Bada Dasain festival. Goddess Durga Bhawani is worshipped on this day.

Likewise outside the Kathmandu Valley, devotees thronged the Dantakali Temple of Sunsari; Manakamana of Gorkha; Gahawamai of Parsa; Chhinnamasta of Saptari; Rajdevi of Dhanusha; Ugratara of Dadeldhura; Chandeshwori, Nala Bhagawati and Palanchowk Bhagawati of Kavrepalanchowk; Palchowk Bhagawati of Sindhupalchowk and Kalinchowk Bhagawati of Dolakha to offer special worships to the Goddess Durga Bhawani and offer sacrifices of different animals.

People who do not sacrifice animals offered sacrifices of various vegetables and fruits in place of animals.

On the occasion, special Durgapuja worship and prayer ceremonies were held at the Dashain Ghars. They also read the Durga Saptashati scriptures.

Goddess Mahagauri, the eighth form of the manifestation of Mother Goddess Durga, was worshipped today on this day of the Dashain festival is considered a special day when Goddess Durga attained power.

Shailaputri, Brahamacharini, Chandraghanta, Kushmanda, Skandamata, Katyayani, Kalaratri, Mahagauri and Siddhidatri are worshiped as the nine forms of the Goddess Durga during the first nine-day of the 15-day Dashain Festival.

Also on this day, a special Kalratri worship is held at midnight at the Dashain Ghar of Hanumandhoka in the capital city. RSS

Devotees are thronging the goddess temples throughout the country today on the occasion of Maha Astami, the eighth day of... Read More...