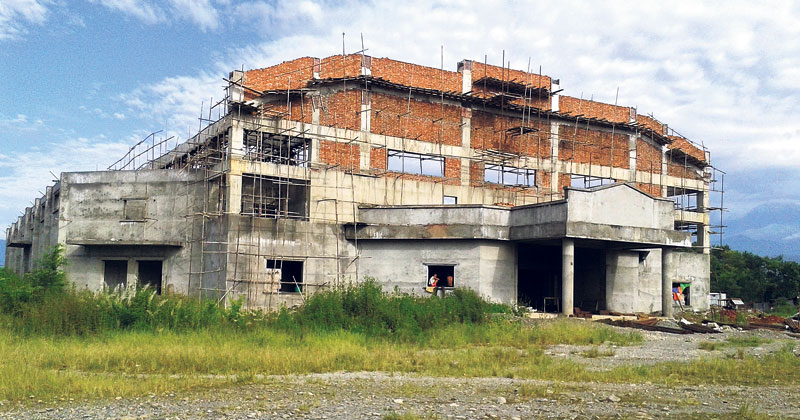 POKHARA, Sept 3: Many recognize Pokhara as a city of tourists. But the identity of Pokhara is not just limited to tourism as sports activities including two big football tournaments -- Aaha Rara Gold Cup and Pokhara Cup -- and various other sports meets organized round the year also give recognition to the beautiful city.

The infrastructures of Pokhara stadium are expended across 417 ropanis of land. The football stadium and ground built in 1983/84 are currently in poor condition.  The three decades old stadium hasn't been maintained and renovated on regular basis.  The VIP parapet, which was cracked by the earthquake, is awaiting renovation.

Two major tournaments were held in the stadium after the earthquake. Though the   tournaments went smoothly and concluded peacefully, organizers were worried about the safety of the spectators due to damaged parapet.  The next tournament will being after few months but the renovation has not yet started.

“We used to fear for spectators' safety during tournaments,” said Birbhadra Acharya, the president of Sahara Club which has been organizing Aaha-Rara Gold Cup in annual basis since more than a decade. “We are fortunate that no untoward incident happened. We couldn't sleep well during the tournaments.”

The parapet of the Pokhara stadium which has capacity of 500 spectators hasn't been maintained notably since it was constructed more than three decades ago. Few years back, there were minor maintenance works to block water leakage from the roof.

Similar is the condition of the open parapet having the capacity to hold 1800 spectators. There has been no notable change other than the stands being painted before tournaments.

“It feels bad to see thousands of football lovers watch the matches sitting down on the floor (ground). But government is indifferent to the problems,” Acharya lamented.

“It can't be improved until government invests for its renovation and maintenance. We are ready to join hands with the government for the betterment of stadium if the government comes up with ample investment,” he added.

District Sports Development Committee has already submitted a written report about the condition of the football stadium to National Sports Council (NSC). But the sports governing body of the country has not allocated budget for improvement of the infrastructures.

“There was allocation of Rs 4.5 million in the last fiscal year under the heading of Pokhara Stadium maintenance.

The construction of athletics track alongside football pitch has been completed recently. The track was constructed through budget allocated by National Sports Council last year. There are eight lanes (1.22m wide each) having the length of 400m. “Pokhara stadium was lacking athletics track and it has added to the beauty of the stadium,” Tamrakar said.

Delay in the construction of multipurpose building

“We have given additional six months time to complete the construction work. This is the most notable infrastructure constructed in Pokhara after the football stadium. It will trigger sports development in Pokhara,” District Sports Development Committee's chief Prakash Baral said.

The 46-meter long covered hall which is 27 meters wide has the capacity to hold more than 2100 spectators. Indoor games like handball, volleyball, basketball, badminton, judo among others can be conducted inside the covered hall.

“This is a multi-year project, there will be drastic change in the development of the sports in Pokhara after its completion,” said Baral.

International Cricket Council (ICC) construct cricket ground within Pokhara Stadium premises five years back. Five pitches worth Rs 8 million were constructed inside the Pokhara Stadium at a cost of Rs 8 million with the support of locals. Mud was even laid around 30-yard area of each pitch. But no steps were taken to preserve the pitches. Now the condition of the pitches has become poorer, according to Debendra Praju, the president of Kaski District Cricket Association.

“The government and NSC haven't played any role in the construction of pitches. They are now in poor condition due to negligence in preserving pitches,” Praju said. He also added that the pitches need to be reconstructed. However, Praju informed that NSC has started Detailed Project Report in order to construct the infrastructures for the cricket ground.
Slow pace in volleyball court construction

Along with popularity of volleyball in Pokhara, it has also produced some big names in the game. Besides this, Pokhara also hosts various national and international tournaments in annual basis. Pokhara District Volleyball Association decided to construct four open volleyball courts on the stadium premises. It has already started volleyball project worth Rs 11.7 million. However, the project has been delayed. The construction which began some six months ago was supposed to finish by a year.

District Volleyball Association's President Bhim Parajuli pointed out lack of sufficient funding by NSC as the reason for delay in construction. “NSC Member Secretary had promised us allocation of budget during foundation laying ceremony of the court. But no budget has been allocated in this fiscal year,” said Parajuli.  “However, we are trying to finish construction of two courts within a couple of months on our won,” said Parajuli.

Though there has been delay in big projects, completion of other small projects like semi-covered hall, archery training center, tennis court is changing the face of Pokhara stadium. “Yes there has been delay in the big projects but it's not that nothing has been done. We hope to see the new face of Pokhara stadium in coming years,” chief of District Sports Development Committee Baral said.

The government is preparing to organize the 13th South Asian Games (SAG) in Nepal in 2018. Besides Kathmandu, NSC has chosen Pokhara as one of the host cities. But construction of infrastructure to host SAG (games) in Pokhara is yet to start.

Pokhara has produced many star players of popular games. Locals believe that if it gets proper attention from government to construct the needed infrastructures, it will contribute to change the face of the whole nation's sports.

“It is possible for Pokhara to host games of SAG if people at the local level work together with the government. But the most important factor is the willpower of the government,” said Sahara Club President Acharya.

Hosting the SAG in Pokhara will not only help in sports development of the city but it will also contribute to the betterment of the city's economy, said Acharya.

“SAG can widen the popularity and identity of Pokhara. It will make Pokhara's tourism better,” added Acharya.

Western Regional Development Committee's President Khag Raj Poudel informed that the preparations to host the SAG in Pokhara are yet to start. He also informed that NSC had declared to host seven different games in Pokhara. “The infrastructure development in the city should have already started if the government was serious about holding SAG (games) in Pokhara. But nothing has started yet and it has worried us,” said Poudel.

“Our plan is to build the parapet around the stadium and we need help from every sector to accomplish that plan,” said Poudel. “There are lots of works to be done. We are demanding budget for the infrastructure development. If the government wants to host some games of the SAG in Pokhara then preparations should start at the earliest.”

'Call for developing Pokhara as city of sports'

Souls of my city: Sports star on a wheelchair

Tilak Tharu was an ardent football player as a child. But at 19, Tharu was left immobile with a broken... Read More...

Nepse inches up 4.97 points, while daily turnover amount dips to Rs 1.76 billion on Wednesday
57 minutes ago