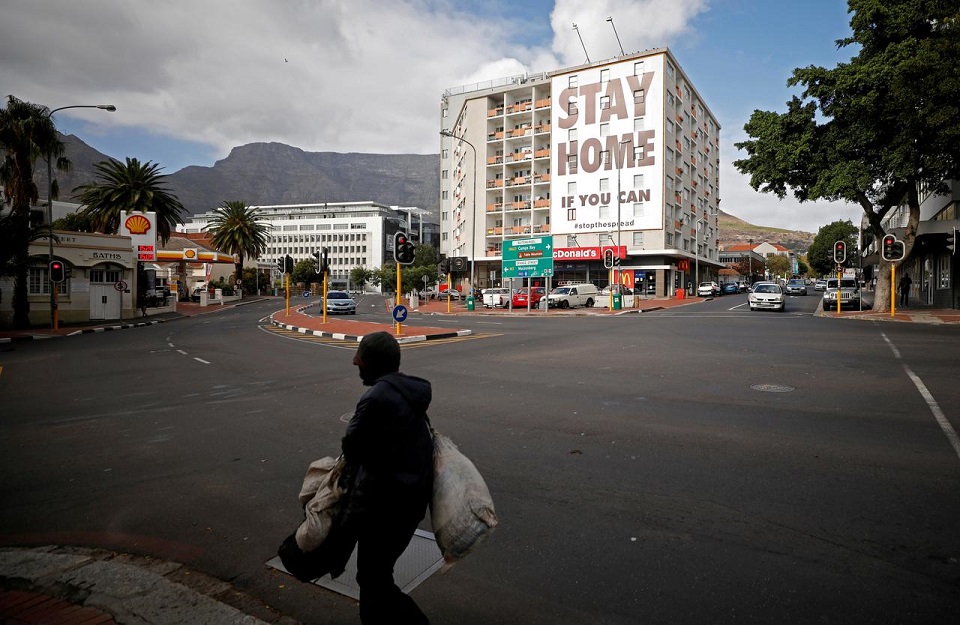 FILE PHOTO: A man walks past a poster covering the side of a building ahead of a 21 day lockdown aimed at limiting the spread of coronavirus disease (COVID-19), in Cape Town, South Africa, March 26, 2020. REUTERS/Mike Hutchings/File Photo

GENEVA, March 30: Developing countries will need a $2.5 trillion support package this year to face the economic crisis caused by the coronavirus pandemic, a U.N. report said on Monday.

Their economies will take “enormous hit” from high capital outflows, lost export earnings due to falling commodity prices and currency depreciations, with an overall impact likely worse than the 2008 crisis, the report said.

Needed measures will include a $1 trillion liquidity injection and a $1 trillion dollar debt relief package, according to the paper by the U.N. Conference on Trade and Development (UNCTAD).

Another $500 million will be needed for emergency health services and related programmes, on top of capital controls, the report added.

Sub-Saharan African countries will be among the hardest hit alongside others including Pakistan and Argentina, said Richard Kozul-Wright, director of globalization and development strategies at UNCTAD who oversaw the report.

“It’s going to be really bad,” he added, referring to a “frightening combination” of factors including mounting debts, a potential deflationary spiral and a major health crisis.

“The international institutions have to take these sorts of proposals very, very seriously as it’s the only way that we can see to prevent the damage already taking place and which will get worse,” he added.

In what he said was likely a conservative estimate, Kozul-Wright said the coronavirus would cause a $2-$3 trillion financing deficit over this year and next.

In an early sign of the impact, portfolio outflows from main emerging economies were $59 billion a month between February and March compared to $26.7 billion in the immediate aftermath of the 2008 crisis, the report said.

UNCTAD considers around 170 countries to be developing but the financing gap figure stripped out China and South Korea.

“If G20 leaders are to stick to their commitment of ‘a global response in the spirit of solidarity,’ there must be commensurate action for the six billion people living outside the core G20 economies,” Kozul-Wright said.

Leaders of the Group of 20 major economies pledged on Thursday to inject more than $5 trillion into the global economy to limit job and income losses from the coronavirus and “do whatever it takes to overcome the pandemic”.

The figures in the report titled “The Covid-19 Shock to Developing Countries” echoed an earlier estimate by the International Monetary Fund.

KATHMANDU, June 29: As dozens of countries have been lining up to pledge troops, equipment and technology for its peacekeeping missions,... Read More...