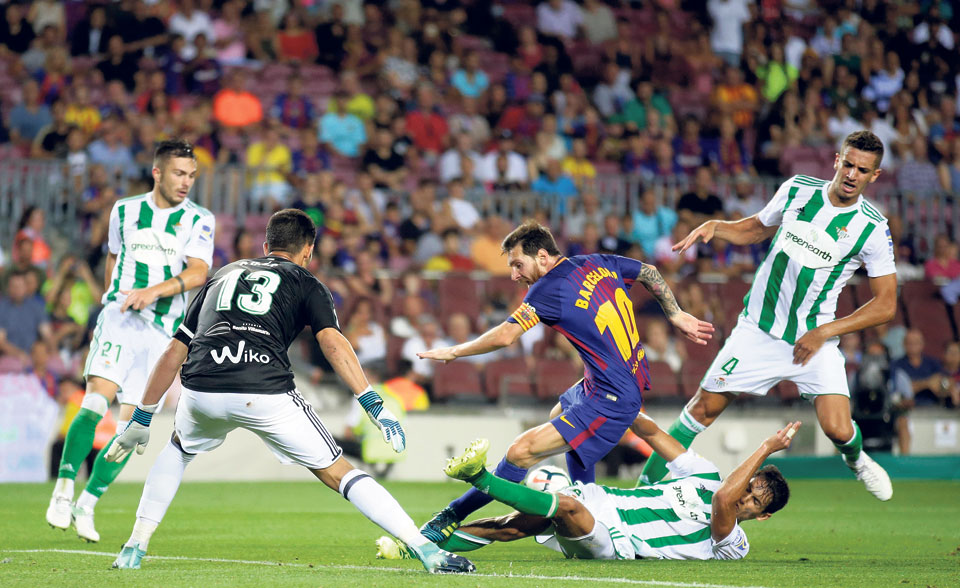 BARCELONA, August 22: Barcelona got off to a winning start in La Liga on Sunday, beating Real Betis 2-0 in a subdued atmosphere at the Nou Camp after the deadly attacks in the Catalan capital.

Rivals Real Madrid began their pursuit of back-to-back league titles for the first time since 2008 with a 3-0 win at Deportivo La Coruna with goals from Gareth Bale, Casemiro and Toni Kroos, although captain Sergio Ramos was sent off in the dying seconds, earning a 23rd career red card.

Betis defender Alin Tosca diverted a cross from the lively Gerard Deulofeu into his own net to put Barca ahead in the 36th minute, while the former Everton forward, who returned to his boyhood club this summer, also laid on the pass for the second goal which was smashed in by Sergi Roberto in the 39th.

Lionel Messi was the fulcrum of most of Barca’s creativity and more responsibility was placed on his shoulders due to the absence of Luis Suarez and Andres Iniesta. But the Argentine was denied a goal, hitting the woodwork three times.

RUTHLESS REAL
In Coruna, Deportivo made a flying start against Real but wasted three early chances to surprise the champions.

Isco and Marcelo drove Zinedine Zidane’s side forward from the left and moved the ball for Luka Modric to shoot at goal. The Croatian’s tame shot slipped out of the hands of goalkeeper Ruben Martinez to the feet of Karim Benzema, who rolled the ball across for Bale to nudge home.

Real then showed their class with their second goal after a long period of possession, with Marcelo sliding the ball to the far post where Casemiro was waiting to tuck into the unguarded net, completing a move involving 44 passes.

Toni Kroos met a Bale cutback to strike Real’s third in the 62nd minute while Deportivo striker Florin Andone completed a miserable night by squandering a late penalty.
Spain center back Ramos, who has never been sent off in 143 games for his country, earned a second yellow card in injury time, joining Pablo Alfaro and Xavi Aguado on a La Liga record of 18 red cards.

Ramos is Real’s most sent off player, with former defender Fernando Hierro trailing way behind on 12 red cards. Out of Ramos’s 23 red cards, 18 have come in the La Liga, three were shown in the Champions League and two in the King’s Cup.

Five players were sent off in eight Liga games over the weekend, compared to two in nine Premier League games.

LOS ANGELES, Dec 7: It wasn’t Angelina Jolie or Jennifer Lawrence who got the most rousing applause at the Hollywood Reporter’s... Read More...