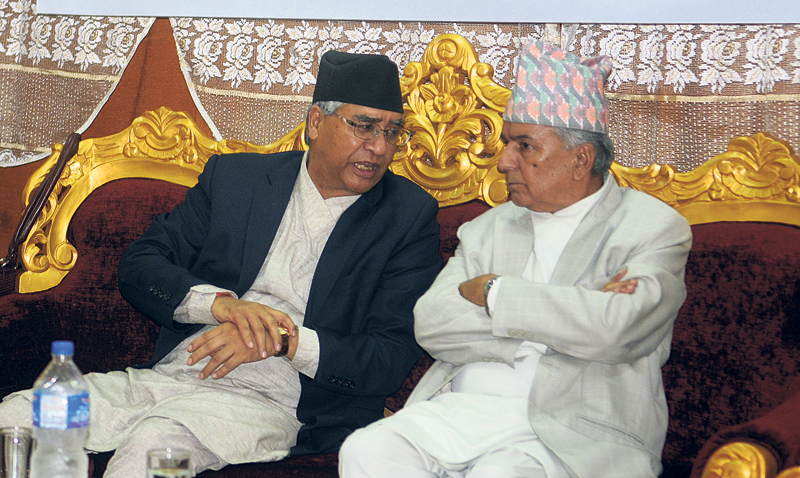 KATHMANDU, Aug 22: Major ruling coalition partner Nepali Congress, which had earlier insisted that local polls be held only after the restructuring of the local bodies, has said that the government should conduct local polls for the interim period under the existing local structures.
NC President Sher Bahadur Deuba, speaking at a meeting of the party’s district presidents in Kathmandu on Sunday, said that the local polls should be conducted by mid-April under the existing local structures.

Earlier, when the Oli  government proposed holding local polls in November, the NC had insisted on holding the polls only after restructuring the local units. The NC-Maoist government postponed the local polls to April immediately after toppling Oli’s government.

Stating that the  local units proposed by the Local Body Structuring Commission had become a matter of dispute, Deuba argued at the meeting that local body restructuring should be done after detailed study and proper preparations, according to participants at the meeting.

“With serious dissatisfaction surfacing in most of the districts over the proposed restructuring of local units, we should not impose the restructuring forcefully. Local polls can be conducted  for the interim period under the existing local bodies structure,” NC Nuwakot district president Jagdish Narsingh KC quoted Deuba as saying at the meeting.

According to NC district presidents, Deuba said that local polls had become a must both for the implementation of the new constitution and for the effective distribution of development programs.
NC district presidents at the meeting criticized the Local Body Structuring Commission for undermining the convenience of local people. Most of the district presidents accused the commission of just merging five or six VDCs without conducting any proper study of geographical structures and the wishes of the locals. Similarly, they have accused the commission of restructuring local units solely on the basis of population, said KC.

Most of the NC district presidents suggested to the party leadership to lobby for around 1,000 local units as proposed in the party’s election manifesto.

“The NC had proposed around 1,000 local units in its election manifesto, but as our party did not furnish its opinion when the commission started its work, most of the presidents have criticized the party leadership for its indifference to the issue,” NC Tehrathum district president Govinda Dhungana said.

Earlier during a separate meeting with NC leader Shekhar Koirala, over two dozen district presidents of the NC had proposed holding local polls under the existing local structures.

BAITADI, April 5: The CPN (Maoist Center) Baitadi has fixed the candidates for the post of mayor and chairpersons in... Read More...