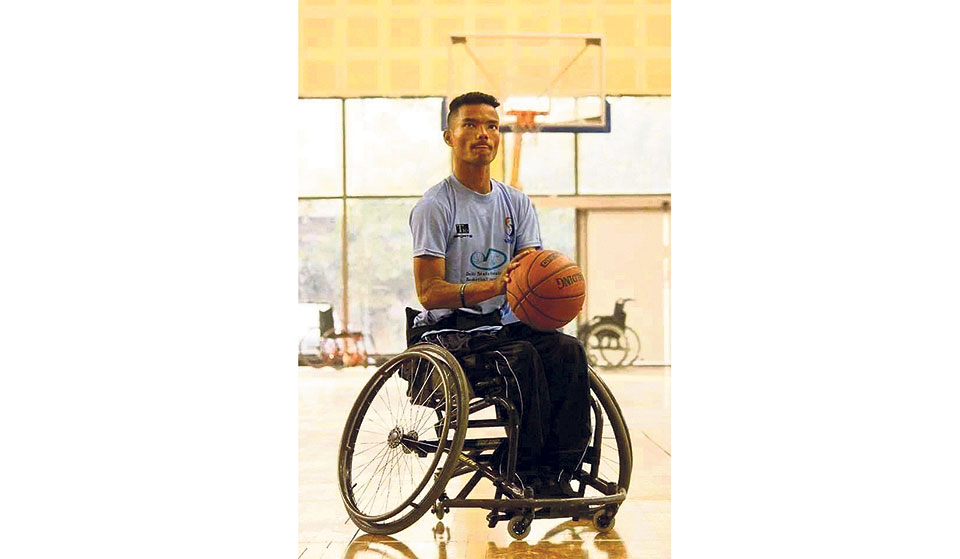 Dan Theeng’s story is a story of endurance, resilience, determination and passion. He has dreams and no matter the obstacles, he is mastering an inner strength and courage to keep going

Dan Theeng is a 24-years-old young man striving for success despite a life full of hardships. Originally from Sarlahi, Dan lost her mother when he was a toddler and till now he does not know much about the causes of her death. Her passing is wrapped in a sort of mystery as his father, a local farmer, never wanted to share with him what led to the tragic loss of his wife and Dan was never able to raise the issue. Likewise, when he was really small, like thousands of other people at that time, Dan contracted polio, a condition that defined his life for better.

I am saying for better because Dan’s story is a story of endurance, resilience, determination and passion. As young disability rights activist, Dan is determined to project confidence that, no matter his personal challenges, he is going to succeed in life. He has dreams and no matter the obstacles he is facing, he is mastering an inner strength and courage to keep going.

Common fate
How many Dans are out there in Nepal? How many struggling youths across the country are trying very hard, day in and day out, to believe that they are going to have a chance? There is no clear data but out there are a high number of youths from minorities, youths from indigenous groups, youths living with disabilities, youths from Dalit families or youths from the LGBT community or economically deprived family who are trying their best to emerge and thrive.

But what are we doing to help them believe in themselves, ensuring that they are not going to lose hope and that their future can be better? What is the government doing to ensure that young people like Dan have the inalienable right to shape their destiny rather than having a future pre-determined by historical, cultural and economic discrimination?

Dan spent most of his life outside home and, like many other peers living with disabilities, he ended up in Kathmandu where he lived at a rehabilitation center in Gokarna while studying first at Baba Boarding and at East Pole wherefrom he completed his SLC. He was able to study because of generous support from these private institutions. Being able to interact with peers living without disabilities allowed Dan to create bonds and connections with the “other” society, the society that often excludes and marginalizes persons with disabilities.

He found in sports a vehicle of social acceptance and integration and he never shied away, despite his physical struggles, to play basketball with his able-bodied mates. That was a turning point. As Dan moved on with his life, he found new friends sharing a passion for sports. Those not particularly interested in sports might not know it but playing in a team, sharing common values and striving for common goals, all essential elements of a sport team, can change a person for better, helping a person building her character, resilience and discipline to stay the course and progress.

Dan found a new scope of life in sports, in particular, in wheelchair basketball, where Nepal has a real chance to thrive internationally if the right support is provided. As a member of Jawalakhel Wheelchair Sports Club, Dan started an upward trajectory that is making him one of the best wheelchair basketball players in the country and perhaps, given his international experience he accumulated by playing, one of the best within the entire South Asian region.

He has innumerable achievements as a player: Most valued player (MVP) in the national team which played against India and Bangladesh in 2016, MVP in second edition of Turkish Airlines ENGAGE Empowering League, MVP in two editions of the Indo-Nepal Wheelchair Basketball Championship played in India and in Nepal, in which, during the first edition, he was also awarded for the best assist. In Pokhara, he was awarded the MVP title in three editions of the National Wheelchair Basketball Championship.

More recently Dan shifted side and he is now playing with the Tribhuwan Sport Club Wheelchair Basketball team, the official team of the Army and with them in November was in India for the second edition of the Indo-Nepal Wheelchair Basketball Championship that was won by Nepal.  It is a matter of dismay that no newspapers covered such achievements.

The list of his trophies is long but Dan is not satisfied yet. He wants to reach the highest levels and truly get to the international arena as he dreams to become the first national player to “shoot” internationally.

Dan’s dreams
To prove his determination, Dan decided against common trends: he refused to go back to his village and find a job as a teacher, one of the few uplifting chances if you are from a minority group.  He is sticking around his passion, playing wheelchair basketball at the highest level he can in Nepal but this is not enough for him. Dan wants to find a dignified path of success through competitive wheelchair basketball sports.

He is dreaming to land a full scholarship to play in some universities in the US where wheelchair basketball is strong and where he can be better equipped to become an activist, a social worker and maybe one day he will be able to play professionally in Europe. Dan is ready to make a big gamble, a too big risk but after all, there is no gain without taking risks and he is making a lot of sacrifices as he struggles to maintain himself only with wheelchair basketball.

The three editions of the Turkish Airlines ENGAGE Empowering League, generously supported by Embassy of Switzerland, Turkish Airlines, BLC Group, Nabil Bank and Four Season Travels among others was one of the best platforms for Dan and other players to emerge. Hopefully 2020 will see the fourth edition that could really be a platform to help Dan realize his dreams to play internationally. The League could bring local governments, donors and big corporate houses together to support incredible players like Dan. Maybe some CEOs might decide to step in and ensure that Dan can land a corporate endorsement and become a brand ambassador.

Dan found in sports a new life and like him, many other youths with disabilities, were able to stand up again and face their future confidentially thanks to a ball, a basket and a court generously offered by local schools. All of them still face so many challenges but they have not lost hope. Through sports Dan was able to forge the first friendship with able-bodied youths and to find more friends with disabilities, a community whose members always help each other.

He was able to visit and meet many school children during the innumerable awareness programs he has been running and soon he will try to organize himself some new interactions with indigenous children living with disabilities. Dan is trying but it is hard, really hard for Dan. Certainly it would be unfair just to ask corporates to step in. The state, federal and local, should think of ways to support persons like Dan. Yes, there is a disability allowance for persons with disabilities but Dan is against it. It creates dependency, he says, and he wants to be supported because of his merits, his skills and achievement not out of charity and empathy.

We need to be creative and find ways in which interventions for vulnerable youths are formulated and financial support and mentorship programs can be delivered for deserving but ‘at risk’ youths like Dan. ‘At risk’ because many like Dan have given up dreaming, they are just passing their days or are in uninspiring job in local schools because that’s their only chance or they are segregated or confined to their rooms. Dan’s story is different: He is bold betting everything on a loop, on wheelchair basketball. But that’s his story, his life and his decision. He deserves admiration but also support.

The author is the Co-Founder of ENGAGE, an NGO partnering with youths to promote social inclusion in Nepal
Email: simone_engage@yahoo.com

Go for your passion

Take a step back and reflect on the past few months. See how has life been, how stressed have you... Read More...

In acting with a determination

KATHMANDU, April 1: Born in a simple family in Morang, 22-year-old Namita Ghising, who is waiting for the release of her... Read More...

KATHMANDU, Oct 18: A meeting of the parliament today unanimously endorsed the Rights of Persons with Disabilities Bill-2072 BS. ... Read More...

Trading via Tatopani and Rasuwagadhi still closed despite government assurance: Importers
21 hours ago