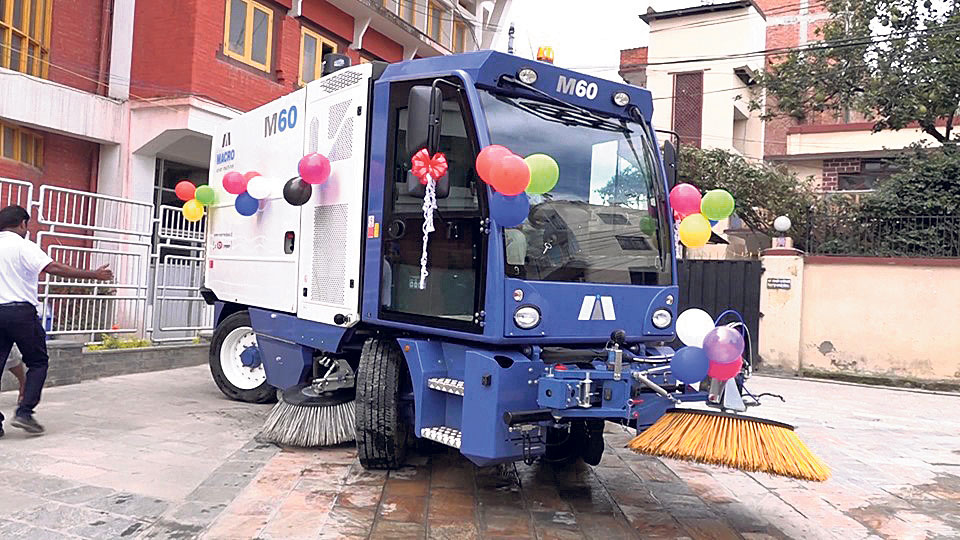 Machines found not suitable in Valley roads as they can work only in smooth roads, cannot collect dust from potholes

KATHMANDU, Feb 6: Although broomer machines are seen operating in the Kathmandu Valley on a regular basis, they have drawn criticism from the operators as well as the general public for not being suitable for the road and environment of the Valley due of some major technical drawbacks they have.

These machines imported from Italy and China with the objective to make both Kathmandu and Lalitpur dust-free zone have failed to deliver on the promises as they have some major drawbacks. They cannot collect dust from the potholes, cannot function during rainy days or where there is water in streets and gets blocked easily by plastics and paper like garbage, making the machine unable to function properly.

“These machines work well on smooth roads but they cannot collect dust from potholes and cannot even function when there is water in the street,” said Sagar Thapa, chief of Logistics Unit of Lalitpur Metropolitan City, which has been looking after the operation of these machines. “This shows that these machines are not suited to the needs of the Kathmandu Valley’s roads.”

Currently, there are nine such vehicles in the valley including seven with the Kathmandu Metropolitan City (KMC) and two under Lalitpur Metropolitan City. These vehicles have an average speed of 10 kilometers per hour. Two trained persons operate each of these machines every day after 8 pm till 3 am in the morning.

However, large number of people still complain about seeing only minimal difference in the amount of dust seen on the roads. “I see these machines being operated during the evenings. But I don’t see any noticeable difference it has brought as roads continue to be dusty,” complained Jenish Thakuri, 21, a student at Tri Chandra College.

Out of the total broomer trucks operating in the valley, two of these were donated by the Chinese government to KMC in May 2018.

The other trucks were brought from Italy at the cost of Rs 20 million each.

Although the Chinese broomers were comparatively larger than the Italian ones, these vehicles were left unused for a couple of months due to technical difficulties and issues with registration of number plates. As of now, even after their regular use, the roads still continue to become dusty and full of pollution.

People have long been questioning about the operation route of these machine as it only runs in a specific areas like Ratnapark, Lainchaur, Bagdurbar, Old Bus Park, Putalisadak, Tripureshwar, Bhadrakali in Kathmandu and Pulchowk, Gwarko, Kupondole, Satdobato, Lagankhel, Krishna Mandir and from Balkumari Bridge to Balkhu Bridge in Lalitpur.

“These machines might have brought slight changes in areas where it operates, but what about the places where it doesn’t operate? Kathmandu Valley still has a lot of places with hazardous level of dust. Why is the metropolis ignoring that?” criticized Sarita Mishra, a resident of Chhetrapati.

Mishra further lamented that she does see these vehicles doing their job in the evening while returning back home from work but the area where she stays still has upsetting level of pollution.

“I don’t ever see higher authorities expanding services besides the busy and main areas,” Mishra expressed her anger to Republica.

However, chief of the Environment Management Department of KMC, Hari Kumar Shrestha, said these broomer machines have been doing great job in cleaning the roads.

Shrestha said although the roads have not become completely dust-free, they can be seen with distinctively less amount of dust these days as a result of regular use of these vehicles. “We cannot expect dust collecting machines to work during rainy days, can we?” he asked. “It is quite normal to receive public criticisms. I believe that these machines have been doing their job effectively so far. Something is better than nothing.”

The government has taken up the much needed work of installing underground electric wires in the Kathmandu Valley. ... Read More...

KATHMANDU, May 30: The Meteorological Forecasting Division (MFD) has predicted partly cloudy weather and rainfall, from light to moderate, for... Read More...

KATHMANDU, Oct 17: More than 2.1 million people have left the Kathmandu Valley for various destinations for celebrating the Dashan... Read More...

Is Nepal prepared to deal with floods in light of COVID-19?
14 hours ago

Only two electric vehicles got customs clearance on May 27: Customs Department
16 hours ago

PHOTOS: 26 Nepalis arrive at TIA from Myanmar
13 hours ago

PHOTOS: 169 Nepalis arrive at TIA from UAE
6 hours ago

PHOTOS: 169 Nepalis arrive at TIA from UAE
6 hours ago

India set to reopen temples, malls but no sprinkling of holy water
7 hours ago

PHOTOS: 26 Nepalis arrive at TIA from Myanmar
13 hours ago