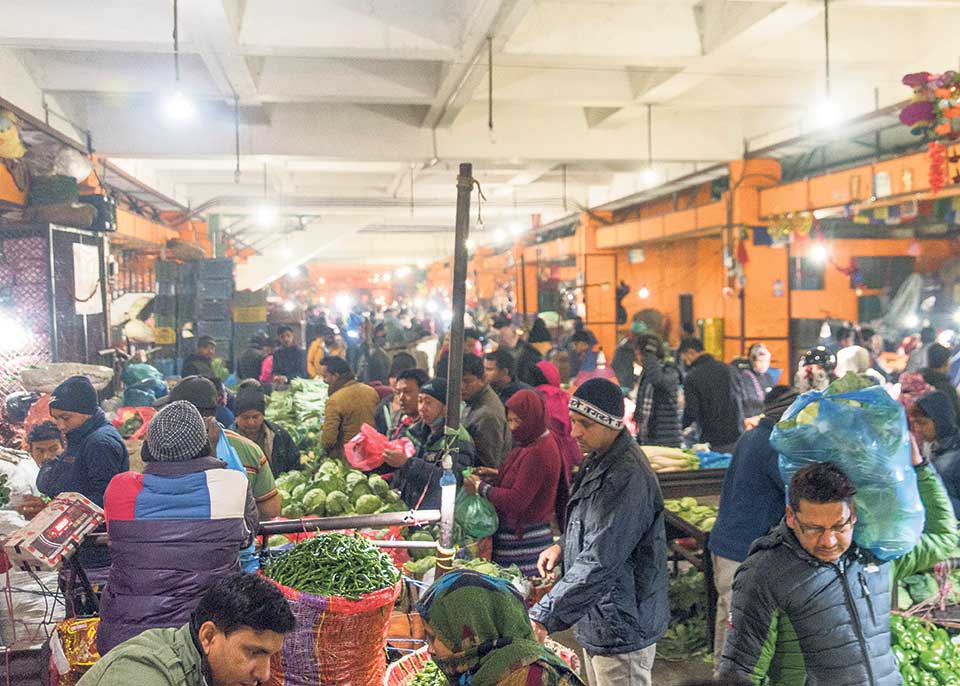 KATHMANDU, Nov 3: Despite commitment and action initiated by the Ministry of Agriculture and Livestock Development to properly manage the Kalimati Fruits and Vegetable Market, traders are still illegally operating stalls in the market.

In September, the Kalimati Fruits and Vegetable Market Development Board had scrapped the stall license of 57 traders among 98 traders who were classified into red group for illegally sub-contracting their stalls to third parties.

The board meetings held on September 4 and 18 had decided to scrap the 57 licenses.
Although the ministry had committed to end irregularities and trader’s syndicate at the Kalimati market, it has failed to take effective action against those traders whom the ministry had found to be involved in wrong deeds.

Among the 98 traders categorized into red group, 25 operating inside the Kalimat market have received a stay order from Kathmandu District Court while the rest 32 traders are operating their stalls inside the market on their own.

There are additional 41 stalls that are still under investigation, according to Tejendra Prasad Poudel, executive director of the board.

A group of Kalimati traders had objected to the board’s action and filed case against the board, demanding scraping of its decision to cancel their stall permits.

While the case was under review at the court, the board kept conducting further investigation into anomalies at the Kalimati market.

The traders have got stay order from the court to operate until the termination of their contract with the board, according to the ministry. The contract will terminate in 2023.

The traders have blamed the board for being biased against them. They have claimed that the real guilty who have good access to powerful people have been excused by the board.

“The board has taken action only against those who do not have power connections,” said Shyam Kanta Poudel, a trader at the Kalimati market.

On the other hand, the board has argued that they are still investigating the traders’ irregularities, in line with its and the ministry’s commitment to end syndicate at Kalimati market.

“We are obligated to the court’s verdict. We can do nothing on this matter,” Poudel said. “However, we will continue our work of further monitoring and investigating into the traders’ activities.”

He also said that the remaining 44 traders have been informed to produce their clarifications about the irregularities that they have been charged of. The board was preparing to handover those stalls to new traders.

The Department of Commerce, Supply & Protection of Consumers had also inspected the Kalimati market on August 28.

KATHMANDU, July 4: Officials at the Kalimati Fruits and Vegetable Market Development Board are reviewing clarifications submitted by wholesalers and... Read More...

Nepal can be new melting pot for tourists, traders and investors: PM Deuba