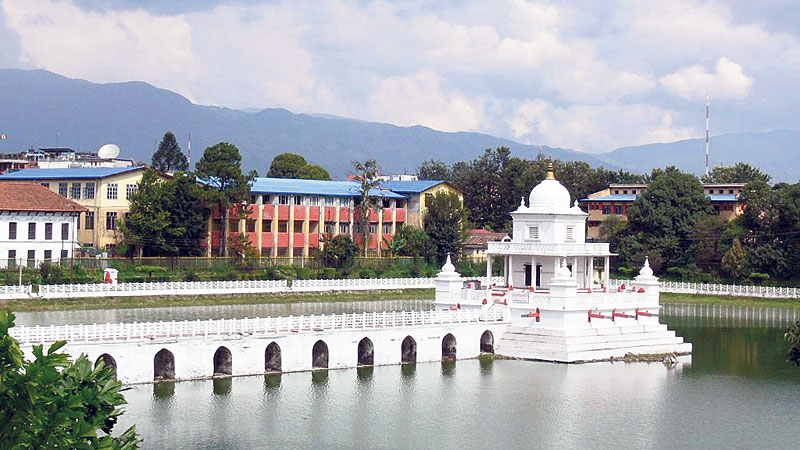 KATHMANDU, Oct 22: The Kathmandu Metropolitan City (KMC) office on Friday has handed over the reconstruction task of the Balgopaleshwar Temple, which lies at the center of the Ranipokhari pond, to the Department of Archaeology (DoA).

The temple was badly damaged in last year's earthquakes.

Critics cited the use of modern construction materials and tampering with the stone inscriptions among other things.  Some experts, local people and the UNESCO office in Kathmandu have expressed concerns over the reconstruction work saying the archeological style of the temple was overlooked.

KMC's chief executive officer, Rudra Singh Tamang, however, also cited the high reconstruction costs for the transfer of the task to the department.

"We had estimated that the reconstruction work would cost around Rs 2 million, but a new estimate has shown that it will cost over Rs 10 million and this is a huge amount of money and beyond our capacity. So we decided to hand over the reconstruction work to the Department of Archeology," Rudra Singh Tamang, Chief and Executive Office at KMC, told Republica.

"KMC will carry out the beautification work around the pond while the Department of Archeology will be responsible for the temple reconstruction," Tamang said. "Both of us have agreed to divide the work."

According to him, the DoA will go through the new process for the reconstruction.
Official at the DoA informed that the department will correct the technical faults and rebuild it keeping its archaeological value in mind.

KATHMANDU, Aug 25: Experts and activists have expressed serious objections over the ongoing reconstruction of the historical Balgopaleshwar temple at... Read More...

35% earthquake survivors yet to rebuild their houses in Sindhupalchok

CHAUTARA, Feb 5: Thirty-five per cent earthquake-affected people in Sindhupalchok district have not yet reconstructed their houses. Sindhupalchok is one... Read More...

Prior infection, vaccines provide best protection from COVID
57 minutes ago