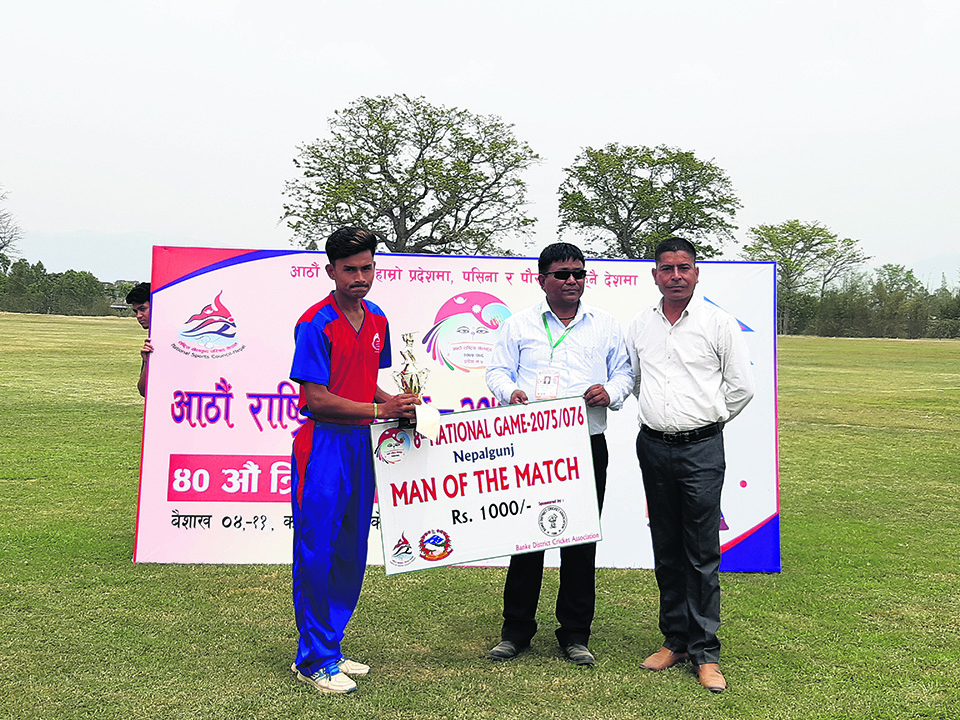 Prakash Jaishi of Province 6 receives the player of the match award during the Eighth National Games at the Siddhartha Stadium in Bhairahawa on Wednesday.

In Group A’s first T20 match, Province 7 was bundled out for 81 runs in 18.3 overs. Skipper Vesawkar was supported by Bhuvan Karki’s two wickets in the match. APF completed the chase with an over to spare. Sher Malla and Narendra Saud shared two wickets each for the losing team.

In the other match of the day in Bhairahawa, Nepal Police Club overcame Province 5 by 62 runs to top the Group A. Police scored 171 runs for the loss of four wickets in 20 overs after winning the toss and electing to bat first. Player of the match Kushal Bhurtel top scored with 55 runs supported by Dipendra Singh Airee’s 38.

In reply, Province 5 was limited to 108 runs for the loss of six wickets in 20 overs.  Anupam Singh contributed 37 runs. Lalit Rajbanshi registered two wickets to give Police first win of the nationals.

Similarly, in the first Group B match played at Kohalpur Cricket Ground, Province 3 defeated Province 6 (Karnali) by nine runs to secure the win in Kohalpur on Wednesday. Province 3 batted first and scored 125 runs for the loss of nine wickets in 20 overs.

Shubh Kansakar and Adil Khan scored 39 and 30 runs respectively. Player of the match Prakash Jaishi registered a five-wicket-haul in the match. In reply, Province 6 was restricted for 116 runs for the loss of seven wickets in 20 overs.

In the second game of the day in Kohalpur, Tribhuvan Army Club defeated Province 2 by eight wickets. In a rain interrupted match, Province 2 scored a total of 74 runs for the loss of six wickets in 19 overs per side match.

Mehboob Alam and Rahul Pratap Singh scored 29 and 17 runs respectively. Player of the match Sushan Bhari picked up three wickets for Army. After another rain intervention, Army completed the 77 runs chase in 14.3 overs for the loss of two wickets. Skipper Binod Bhandari top scored with 42 runs.

In women’s category, Province 1 made a triumphant start defeating Province 5 by seven wickets during the Eighth National Games held at Lamahi cricket ground, Dang. Province 1’s women cricket team won the toss and elected to bowl in the T20 match before bundling out Province 5 for 70 runs in 15.2 overs.
Shabnam Rai of Province 1 and player of the match Rashmi Sharma Chaulagiri shared four wickets each. Roma Thapa scored 23 runs to complete the chase in 14.3 overs.

In the second women’s match of the day played at same ground, Province 2 defeated Gandaki by 62 runs. Province 2 made 135 runs for the loss of eight wickets in 20 overs after Gandaki won the toss and elected to bowl first.

In reply, Gandaki was limited to 73 runs for the loss of eight wickets in 20 overs. Player of the match Saraswati Chaudhary picked up four wickets to help Province 2 win the first match of the nationals.