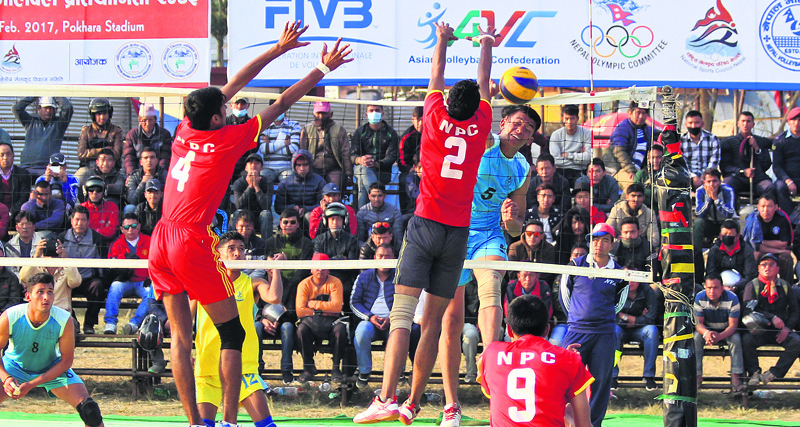 A player of Armed Poice Force spikes as players of Nepal Police Club attempt to block during their Srijana Invitational International Men’s and Women’s Volleyball Tournament semifinals match at the Pokhara Stadium in Kaski on Wednesday.

In the first semifinal match of the men's event at the tournament played at Pokhara stadium's volleyball court, Police registered 30-28, 19-25, 25-16, 25-14 win over departmental rival APF. Now Police will take on the winner of the match between Western Region and Tribhuvan Army Club in the summit clash on Thursday.

After the semifinal victory, Police's head coach Bharat Shah said that changing strategy after the second set led to the victory of his team. “After we lost the second set we changed our strategy which helped us to pull the win. After watching APF's players closely in the first two sets, we made the plan to mark them tightly in the remaining sets.

Meanwhile, APF's head coach Prakash Thapaliya said that his team's defense was below par which affected in the outcome. “Today, our key spikers couldn't play up to the expectation. Our one of the key players Bijay Tamang couldn't play due to injury so that also affected the game,” said head coach Thapaliya. Police's Kul Bahadur Thapa was declared man-of-the-match.

Women's event
The women's semifinal clash was just reverse of the men's semifinal with APF beating Police to book it's place in the final.  APF, which had faced 3-1 defeat to Police in the men's event, registered straight sets win over the departmental rival in the women's category. Finalist APF eased past Police 25-15, 25-14, 25-15. Now APF will face the winner of the match between New Diamond Academy and host Western Region in the title clash.

APF's head coach Prakash Thapaliya expressed his delight over his team reaching the final. “We have strong team and today all played up to their level. Police's key player Kamana Bista's absence also helped us today,” said head coach Thapaliya. Kamana is out due to injury.

Police's head coach Bharat Shah said that his young and experienced players failed to combine properly, resulting in the defeat.

“Most of the players of my squad are young and lack experience and the combination of them and experienced players was very poor,” said head coach Shah. “We missed experienced players today as injured Kamana alongside Chuda Khadka weren't in the team. Their presence would have helped us a lot,” added Shah. Chuda couldn't attend the match citing household works.

KATHMANDU, March 2: The semifinal lineup of the men’s category completed on Thursday, as all the three departmental teams -- Tribhuvan... Read More...

NC leader Paudel, others released after three hours in police control
21 hours ago
Arrest of NC leader Paudel is an indication of totalitarianism: President Deuba
23 hours ago

India and Nepal have decided to move ahead, says Indian External Affairs Minister
1 hour ago

Factbox: UK approves Pfizer-BioNTech COVID-19 vaccine - Who gets it first?
4 hours ago