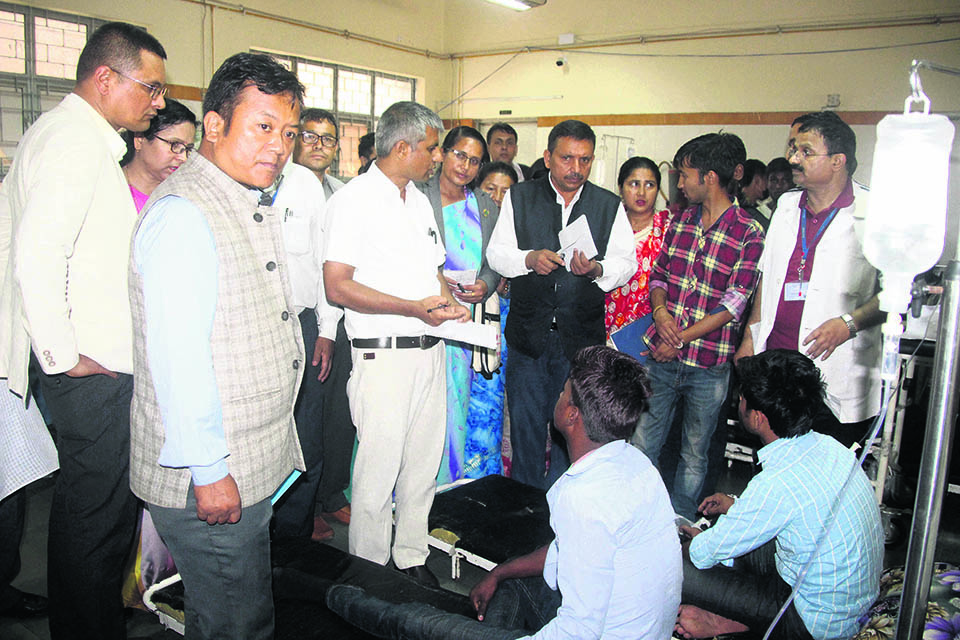 DHARAN, June 7: After failing to control the spread of dengue in Dharan, Nepal Provincial Health Directorate (PHD) has said the disease has become an epidemic and declared some wards of Dharan Sub-metropolitan city as crisis-hit areas.

Bhogendra Dotel, the director of PHD who reached Dharan on Thursday along with Social Development Committee members of Province 1 stated that the dengue outbreak has taken the form of an epidemic. “ If we look at previous records on dengue in Dharan, we can clearly say it has become an epidemic now. That is why, we have declared some wards as crisis-hit and intensified campaign to control the disease,”  said Director Dotel.

According to him, the locals of the crisis-hit areas will be made to dispose of all the water in their storage tanks. Also, students, police and social workers will be sent to every household in the wards to destroy the mosquito eggs and larvae. Director Dotel had proposed declaring crisis-hit areas during his discussions with the BP Koirala Institute of Health and Sciences (BPKIHS) and at the meeting with local representatives.

After this, the sub-metropolis declared two wards (ward 8 and 15) of Dharan as crisis- hit area as most of the dengue patients are from the two wards. Manju Bhandari Subedi, acting mayor of Dharan stated that the wards were declared crisis hit as the disease has gone out of control there.
27 dengue cases detected Thursday alone

Dr Bikash Sah, Assistant Hospital Director of BPKIHS informed Republica that 27 more dengue cases were identified on Thursday alone.  According to him, the number of newly-infected patients has now reached 188. They are being treated at various Dharan hospitals.

DHARAN, August 7: Government's attention has been drawn towards an epidemic of dengue in Dharan of Sunsari. Speaking in a... Read More...

Dengue is down but not out, warn doctors

KATHMANDU, Nov 29: With the onset of the winter season, the risk of the dengue infection in the Kathmandu Valley... Read More...