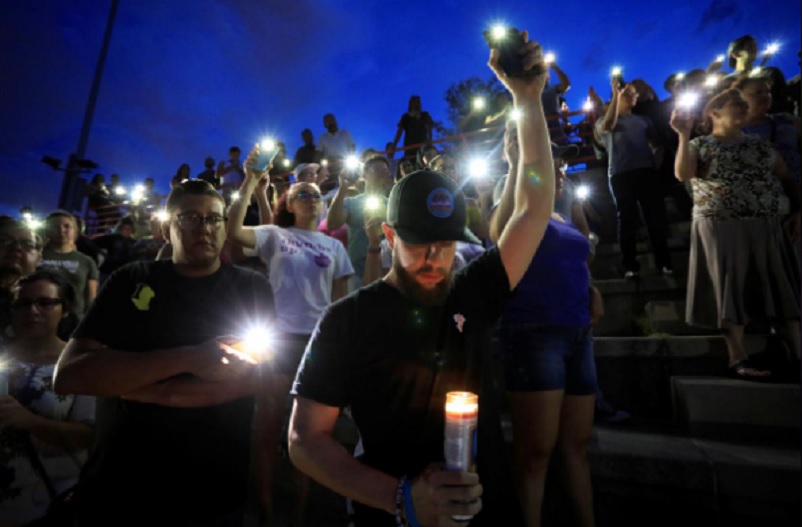 EL PASO, Texas/ WASHINGTON, August 4: Two mass shootings that killed 30 people in Texas and Ohio reverberated across the United States’ political arena on Sunday as Democratic presidential candidates called for stricter gun laws and accused President Donald Trump of stoking racial tensions. Dozens were also wounded Saturday and early Sunday in shootings within just 13 hours of each other in carnage that shocked a country that has become grimly accustomed to mass shootings and heightened concerns about domestic terrorism.

The first massacre occurred on Saturday morning in the heavily Hispanic border city of El Paso, where a gunman killed 20 people at a Walmart store before surrendering. Texas Governor Greg Abbott said the rampage appeared to be a hate crime, and police said they believed the suspect, a 21-year-old white man, may have been racially motivated.

Across the country, a gunman opened fire in a downtown district of Dayton, Ohio, early on Sunday, killing nine people and wounding at least 26 others, police and the city mayor said. The assailant was shot dead by police.

The El Paso shooting reverberated on the campaign trail for next year’s U.S. presidential election, with several Democratic candidates repeating calls for tighter gun control measures and others drawing connections to a resurgence in white nationalism and xenophobic politics in the United States.

“Donald Trump is responsible for this. He is responsible because he is stoking fears and hatred and bigotry,” U.S. Senator Cory Booker, a 2020 Democratic presidential candidate, said on CNN’s “State of the Union.”

Trump branded the El Paso shooting “an act of cowardice” in a Twitter post on Saturday. On Sunday he said state and local authorities were working together to investigate both attacks.

The White House did not immediately respond to requests for comment on Sunday. Speaking to ABC’s “This Week,” acting White House chief of staff Mick Mulvaney rebutted the Democrats’ allegations and attributed the shootings to “sick” individuals.

“There’s no benefit here in trying to make this a political issue, this is a social issue and we need to address it as that,” he said.

“Let’s be very clear about what is causing this and who the president is,” O’Rourke said on CNN. “He is an open avowed racist and is encouraging more racism in this country.”

U.S. Senator Bernie Sanders also took Trump to task. “We must come together as a nation to reject this dangerous and growing culture of bigotry espoused by Trump and his allies,” he said late on Saturday.

A hallmark of Trump’s presidency has been his determination to curb illegal immigration. The Republican president has drawn criticism for comments disparaging Mexican immigrants and referring to the flood of migrants trying to enter through the U.S. southern border as an “invasion.”

In recent weeks, critics accused Trump of racism after his attacks on members of Congress who are members of racial or ethnic minorities.

The White House cannot shirk its responsibility in shaping the public discourse, said Mayor Pete Buttigieg of South Bend, Indiana. “There’s no question that white nationalism is condoned at the highest levels of our government,” he told “Fox News Sunday.”

“He’s spoken about immigrants as being invaders. He’s given licence for this toxic brew of white supremacy to fester more and more in this country, and we’re seeing the results of that,” presidential candidate Julian Castro, the former Democratic mayor of San Antonio, said on ABC’s “This Week.”

While authorities were still investigating the motive of the El Paso shooter, Police Chief Greg Allen said a “manifesto” from the suspect indicated “there is a potential nexus to a hate crime.”

The online statement, believed to have been authored by the suspect, called the Walmart attack “a response to the Hispanic invasion of Texas.”

The manifesto also expressed support for the gunman who killed 51 people at two mosques in Christchurch, New Zealand, in March.

Pope Francis condemned the spate of attacks on “defenceless people” in the United States, including a rampage last Sunday in which a gunman killed three people and wounded about a dozen at a garlic festival in Gilroy, California.

In Texas, police and FBI investigators searched for clues as to what motivated the suspect, who is from Allen, Texas, a Dallas suburb some 650 miles (1,046 km) east of El Paso, which lies on Rio Grande across the U.S.-Mexico border from Ciudad Juarez.

Police said the suspect opened fire with a rifle on shoppers, many of them bargain-hunting for back-to-school supplies, then surrendered to officers who confronted him outside the store.

The FBI had opened a domestic terrorism investigation, according to CNN.

El Paso and Ciudad Juarez, together with the neighbouring city of Las Cruces, New Mexico, form a metropolitan border area of some 2.5 million residents constituting the largest bilingual, binational population in North America.

Mexico’s President Andres Manuel Lopez Obrador said three Mexican nationals were among the 20 people killed in the shooting, and six others were among 26 victims who were wounded.

The carnage ranked as the eighth-deadliest mass shooting in modern U.S. history, after a 1984 shooting in San Ysidro, California, in which 21 people died.

In Dayton, a riverfront city of about 140,000 people in southwestern Ohio, a gunman dressed in body armour opened fire in a downtown district, unleashing carnage that could have been much worse if not for the rapid intervention of police.

Officers who were on routine patrol nearby were on the scene in less than a minute and shot the attacker dead, likely preventing a much higher casualty toll in the historic downtown neighbourhood, police and the city’s mayor said.

Nepali Diaspora in America organizes various literary events in many parts of the country. ... Read More...

SALT LAKE CITY, Oct 14: A Texas couple who set out for a day trip to Lake Powell while on vacation... Read More...

Crime against Humanity
20 hours ago