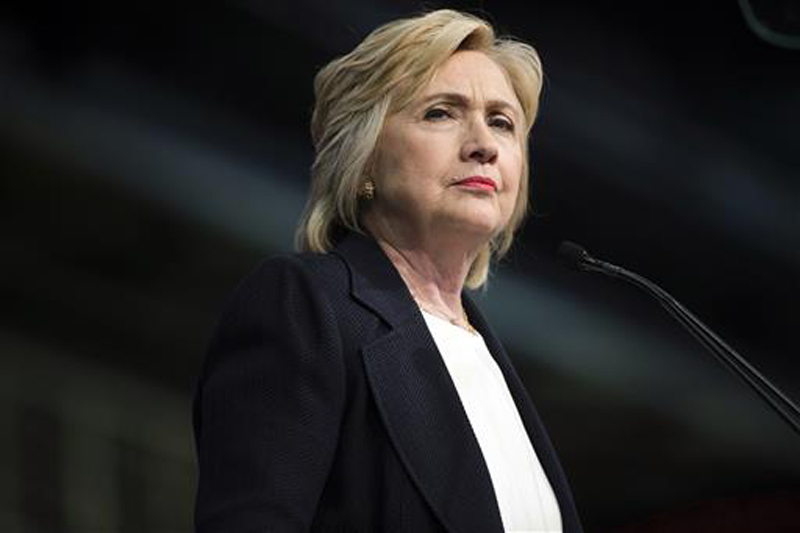 PHILADELPHIA, July 27: Hillary Clinton makes history as the first woman to become the presidential nominee of a major U.S. political party, winning the nomination of the Democratic Party. The former first lady, New York senator and secretary of state claimed her party's nomination over Vermont Sen. Bernie Sanders, who asked Democrats to nominate her by acclamation.

Breaking a historic barrier, Hillary Clinton triumphantly captured the Democratic nomination for president Tuesday night, the first woman ever to lead a major political party in the race for the White House.

Delegates erupted in cheers as Clinton's primary rival, Bernie Sanders, helped make it official when the roll call got to his home state of Vermont — an important show of unity for a party trying to heal deep divisions.

"I move that Hillary Clinton be selected as the nominee of the Democratic Party for president of the United States," Sanders declared, asking that it be by acclamation.

It was a striking parallel to the role Clinton played eight years ago when she stepped to the microphone on the convention floor in Denver in support of her former rival, Barack Obama.

This time, Clinton shattered the glass ceiling she couldn't crack in 2008. And in November, she will take on Donald Trump, nominated last week at the Republican convention in Cleveland.

The second night of the Democratic convention featured former President Bill Clinton, who was taking the stage to deliver a personal validation for his wife. Former presidents often vouch for their potential successors, but never before has that candidate also been a spouse.

Tuesday night wasn't all celebratory. Moments after Clinton claimed the nomination, a group of Sanders supporters left the convention and headed to a media tent to protest what they said was their being shut out of the party. Earlier, several hundred gathered at Philadelphia's City Hall under a blazing sun chanting "Bernie or bust."

Trump cheered the disruptions from the campaign trail. In North Carolina, he told a convention of the Veterans of Foreign Wars that, "our politicians have totally failed you."

Indeed, Clinton's long political resume — secretary of state, senator, first lady — has sometimes seemed an odd fit for an electorate deeply frustrated with Washington and eager to rally around unconventional candidates like Trump and Sanders. Many voters have questions about her character and trustworthiness, suggesting her years in power give her the impression she can play by different rules.

Clinton's campaign views the four-day convention as an opportunity to introduce her to voters anew. Tuesday night featured three hours of speakers who highlighted issues Clinton championed for years, including health care and advocacy for children and families.

Among those pledging support for the Democratic nominee were the "mothers of the movement" — several black women whose children were victims of gun violence. Clinton has met privately with the mothers and held events with them, and they've become an emotional force for her campaign.

"Hillary Clinton has the passion and understanding to support grieving mothers," said Sybrina Fulton, whose son Trayvon Martin was killed in 2012. "She has the courage to lead the fight for commonsense gun legislation."

Clinton aides believe a focus on policy is another way to rally Sanders' supporters, especially those who have threatened to stay home or vote for Republican Trump. The "Fights Of Her Life" segments focusing on Clinton's accomplishments were interspersed with videos featuring Trump's comments opposing abortion and bemoaning that women's pregnancies hurt businesses.

Clinton's landmark achievement saturated the roll call with emotion and symbols of women's long struggle to break through political barriers. Jerry Emmett, a 102-year-old woman born before women had the right to vote, cast the ballots for Arizona.

Martha McKenna, a Clinton delegate from Maryland, said the night felt like a celebration for Sanders' campaign as well as Clinton's. She added, "The idea that I'm going to be here when the first woman president is nominated is overwhelming."

The Democratic convention drew the party's biggest stars to sweltering Philadelphia for the week-long event. On Monday night, first lady Michelle Obama made an impassioned case for Clinton as the only candidate in the presidential race worthy of being a role model for the nation's children. President Barack Obama and Vice President Joe Biden will speak Wednesday, along with Virginia Sen. Tim Kaine, Clinton's new running mate.

Bill Clinton had the spotlight Tuesday night. The former president has campaigned frequently for his wife during the White House race, but mostly in smaller cities and towns, part of an effort by the campaign to keep him in a more behind-the-scenes role.

During Hillary Clinton's first presidential campaign in 2008, her husband angered some Democrats with dismissive comments about Obama. This year, he — and she — were criticized after he met privately with Attorney General Loretta Lynch in the middle of the FBI's investigation into her email use at the State Department.

The roll call this year, when each state announced its delegate totals from the primary season, affirmed a nomination Clinton locked up weeks ago.

MUMBAI, Nov 6: Superstar Salman Khan has come out in support of Hillary Clinton for President of the United States in... Read More...