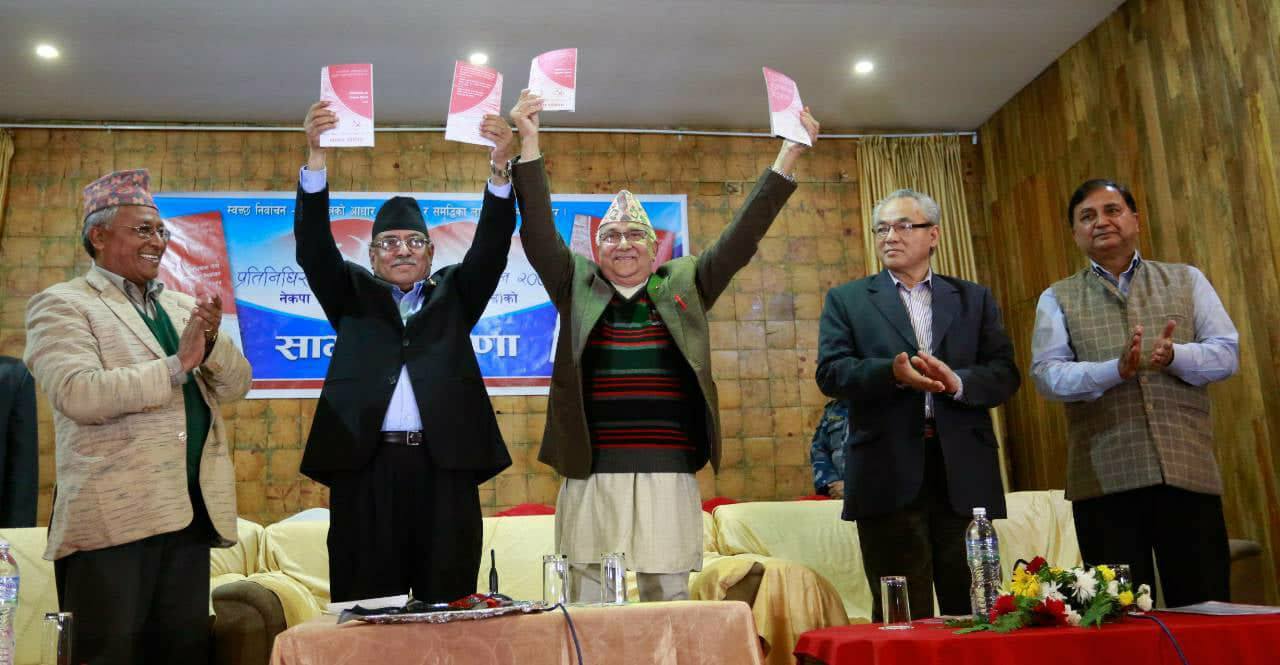 The ongoing elections turned into a referendum when two major left parties, UML and Maoists, formed an alliance, with the ultimate goal of imposing communist rule.

In 1951, following the success of the popular revolution led by Nepali Congress leader BP Koirala, the king, recently freed from the clutches of Rana family rule, promised to the people: “Hereafter, our subjects shall be governed by a democratic constitution to be framed by a constituent assembly elected by the people”. Congress successfully led all subsequent major democratic movements in the country. It is not a coincidence that the inclusive democratic constitution of Nepal written by people’s representatives and promulgated by an elected Constituent Assembly became possible under the leadership of Congress President and Prime Minister Sushil Koirala.

Even the decade-long so-called people’s war waged by the Maoists against parliamentary democracy ended with a peaceful democratic movement led by Congress President G.P. Koirala. The constitution of Nepal is one of those rare documents framed by an elected Constituent Assembly anywhere in contemporary world. It helped mainstream the armed rebels and transform the armed conflict into peaceful constitutional politics.

The constitution is the culmination of the painful democratic struggle by the people of Nepal for over seven decades. The federal and provincial assembly elections under the new constitution held last week and the second phase to be held this week, therefore, carry historical significance for all democratic forces and for the country’s future direction.  The elections are being closely watched both by our neighbors and the world at large.

The first phase of these parliamentary and provincial assembly polls witnessed 65 percent voting in 32 hilly and mountain districts, despite the severity of weather and other adversities. Nepal has mixed electoral system under which 165 MPs will be elected to the 275-member House of Representatives under the first past the post (FPTP) and 110 will come from the proportional representation (PR) system. Another 550 representatives will be elected to seven provincial assemblies.

The completion of these elections will ensure full implementation of the constitution, institutionalize recent democratic achievements, and strengthen the democratic roots in the country through strong local leadership. Here again, it is not a coincidence that the historic elections are taking place under the leadership of Nepali Congress President and Prime Minister Sher Bahadur Deuba.

The election can be labeled as a referendum: a clear choice between democracy and dictatorship. It would have been a normal and routine election. But it turned into a referendum when, on October 3, right on the eve of polls, Nepal’s two major communist parties formed an alliance, with the ultimate goal of imposing communist rule. They questioned the very spirit of the constitution they swore by right through the constitution-making process. They call themselves ‘saviors’ and consider an executive president with sweeping powers as a surety of political stability and prosperity, for the final push towards socialism.

As communist parties of Nepal have their origin in ‘elimination of class enemies’, their natural inclination is for totalitarianism that is rooted in terror, single-party rule, a centrally planned economy, and command over the media, a system in which there are no individual rights and liberties. They never tire of talking about socialism but the socialism they have in mind is one without democracy and pluralism. History suggests that socialism without democratic pluralism could result in another Soviet Union and Yugoslavia—the future of millions depending entirely on a single individual who has concentrated all state powers in his hands.

When there is a desperate need for politics of consensus, reconciliation and national unity in order to strengthen the roots of our hard-won inclusive democracy and republic, the communist posture has introduced yet another phase of uncertainty and confusion. Having settled the political question after a long and arduous struggle, the widespread expectation was that political parties would now work to alleviate people’s sufferings and provide them with jobs, health facilities, safe drinking water, quality education, and world-class infrastructures. But no.

Pluralism and multiparty democracy are anathema to communists, who are masters at exploiting democracy’s attributes of openness, harmony and diversity. For them tolerance is a taboo. They carry unchecked mass surveillance and assume all dissenters to be their enemies. Despite decades of democratic practice, a look at past behavior of Nepal’s communists reveals their subversive agenda against democracy.

After the King Mahendra in 1960 dismissed the first-ever elected government led by B.P. Koirala and dismantled parliamentary democracy, communists were greatly encouraged. As the late American scholar, Leo E. Rose said on March 22, 1991, the communists aided the king in his jingoistic actions. In a referendum that followed the students’ movement in 1979, and with given a choice between reformed Partyless Panchayat and multiparty democratic system, the communists, bar a handful of exceptions, voted for the party-less Panchayat.

The 1980 referendum was the biggest democratic exercise during the king-led Panchayat system, which was described by the monarch as compatible with Nepal’s traditions and soil. Now UML chief KP Oli wants ‘democracy with Nepali characteristics’. It seems Nepali communists are on the Mahendra path; that are determined to deny people even their fundamental rights.

Past evidences speak of communists’ preference for power over principles, for jingoism, populism and opportunism, and inconsistency in policy and behavior, with utter disregard for ground realities. This has deeply hurt national interests and caused recurring misunderstandings and tensions with our neighbors and broad confusion in the international community.

After the restoration of democracy in 1990, no sooner was the elected government installed, the communists in opposition declared their intent to pull it down through a civil servants’ strike.

People back then were hopeful that democratic institutions were taking root, for the first time in thirty years. There was an elected parliament, well-functioning network of elected bodies at the grassroots, and with the economy registering 6 percent growth for the first time in Nepal’s history.

But people’s hopes were shattered when the Maoists launched their armed revolt against parliamentary democracy. The decade-long war took over 17,000 lives, destroyed physical
infrastructures and left the country traumatized.

With king Gyanendra’s absolute power grab in 2005, the country came to be caught between the guns of extreme rightist and leftist elements. The net result was the weakening of hard-won democracy, erosion of the foundations of national power and shrinking of national policy space.

Up to the voters

The challenge today is to protect democratic values and principles and shun the system of fear, threat and terror by strengthening democratic institutions and rule of law. The constitution needs to be implemented in full and people’s fundamental rights fully protected.

Democracy is a must for Nepal. Democracy is not a luxury but an absolute necessity for Nepal to remain united and embark on the path of peace, stability and prosperity. Democracy is vital for reconciling competing interests and needs of a diverse society like Nepal. Democracy is a prerequisite in consensual unification of bickering and disunited elites. Populism, both on the left and the right, takes us away from solutions. The voice of moderation lies in the middle path represented by Nepali Congress.

Democracy and development are not contradictory but complementary; they are mutually reinforcing. Democracy is indispensable for development, and development becomes balanced, inclusive, sustainable, and equitable only within a democratic framework.

Democracy is an anchor of peace and prosperity and stabilizing factor in the region and the world. Those who stand against modernity and democracy and refuse to be democratized in line with the wishes and aspirations of the people will disappear, just like the 240-year-old institution of monarchy.

Democracy is like a growing child. It needs to be carefully nurtured by all to keep it from being deformed and distorted. People of Nepal have firmly rejected violence as a political means and said ‘NO’ to all forms of authoritarianism. The fate of Nepali democracy is now in the hands of voters, who will ultimately shape the future direction of national politics and the country’s long-term destiny.