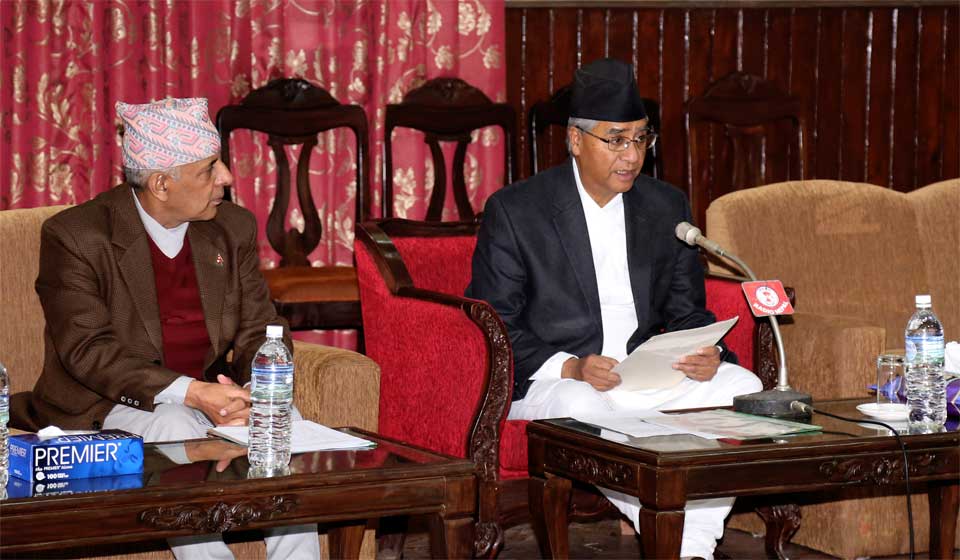 KATHMANDU, Feb 7: A Main Celebration Committee has been constituted under the chair of Prime Minister Sher Bahadur Deuba to observe the 68th Democracy Day on coming February 19 in a grand way.

A meeting organised today by the Ministry of Home Affairs at the Prime Minister's official residence, Baluwatar, agreed to celebrate the day for three days at home and all Nepali missions aboard. The celebrations will begin from February 18.

The committee headed by the Prime Minister comprises the Chief Justice, deputy prime ministers, former ministers, former chief justices, former speakers and deputy speakers, ministers of states, and officials and members of the constitutional bodies, among others as members while the Home Secretary is the member-secretary.

The main celebration shall be held at the Army Pavilion Tundikhel on February 19 and President Bidya Devi Bhandari will grace the ceremony with her presence.
Likewise, the day would mark Nepal Army's activities including trumpet blowing and gun salute and offerings prayers wishing for the eternal peace of the departed soul of martyrs.

The meeting formed various subcommittees including the Democracy Day publicity subcommittee headed by Minister for Information and Communications, Mohan Bahadur Basnet, to make the celebrations successful.

On the eve of Day, cleanliness programmes will be held at the KMC and other sub-metropolises and municipalities inside the Kathmandu Valley. Likewise, the meeting endorsed the Home Ministry proposal to make a public appeal through media for the celebrations of Day in a grand way and to disseminate talk programme via Radio Nepal

Addressing the meeting, Prime Minister Deuba directed the committee and subcommittees formed in this regard to expedite all necessary arrangements for the celebration.

Nepal celebrates the National Democracy Day on 7th of Fagun every year in the Nepali calendar in commemoration of the establishment of democracy in the country with the abolition of autocratic Rana regime for 104 years on February 19, 1951.

KATHMANDU, Oct 9: A 21-member main programme committee has been formed under chairmanship of litterateur Chittaranjan Nepali to celebrate this... Read More...

KATHMANDU, May 2: A 142-member committee has been formed to mark the 2,561st Buddha Jayanti under the convenorship of the... Read More...

KATHMANDU, Oct 17 : Prime Minister Sher Bahadur Deuba has said that democracy is challenged by the alliance forged among... Read More...