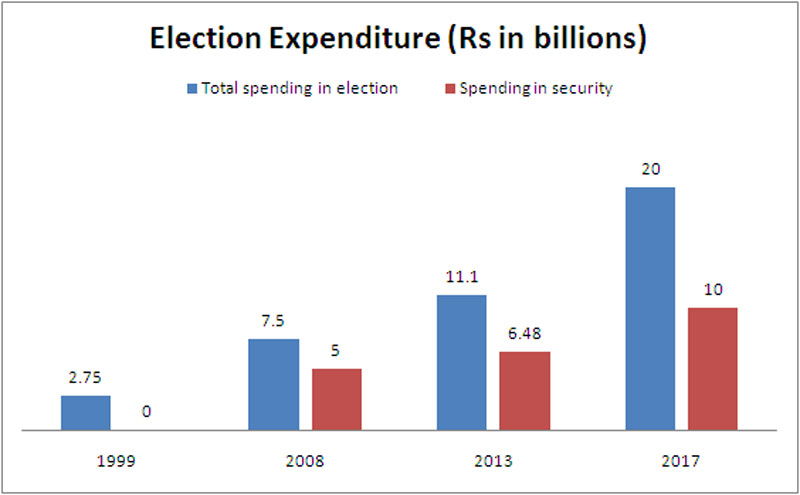 KATHMANDU, April 2: The upcoming election is going to be about twice as costly as that of 17 years ago, even after adjusting for inflation. Government data shows that spending for the parliamentary election in 1999 was Rs 2.75 billion while the estimated spending for the upcoming local election is projected at Rs 20 billion. Adjusting Rs 2.75 billion for an average annual inflation rate of 8 percent over 17 years would result in a figure of around Rs 10 billion.

Increment in the use of temporary police, eleventh hour election preparations that make for dearer procurement of essential logistics, and inefficiency in terms of using more manpower and  less  technology are among some major reasons behind the spike in expenditure of  taxpayer rupees to elect popular representatives.

Former chief election commissioner Nil Kantha Upreti said that democracy is becoming dearer for the taxpayer.  “It's high time we analyzed election expenditure data and strived for more efficiency by fixing the election dates in time as well as using less manpower and opting for more technology,” said Upreti, who also voiced concern over the spike in security expenditure for elections. Using electronic voting machines may save time and money but purchasing those machines has become an opportunity for corruption, he added.

Khanal also termed elections a boon  for those in government as they can pull out all the stops in spending during such occasions. An estimated 10 to 12 percent of the total spent is eaten up by corruption, according to Khanal's estimates.

The spending figures, moreover,do not include the different kinds of support the government receives  from  bilateral and multilateral donors.

A recent news report stated that motor vehicles received for the election in 2013 are now unaccounted for. MoHA had received 716 four-wheelers and the Election Commission 48, as a grant from India.

The government has allocated about Rs 4 billion to MoHA for security management and the EC has also been given Rs 10 billion for the elections. MoHA has now demanded more money, for purchasing vehicles. But the Ministry of Finance (MoF) is determined not to release the additional funds. MoF officials have projected the total spending for the upcoming election at about Rs 20 billion.

In addition to the increased expenditure for elections, the public will also have to put up with higher inflation, as spending during the election campaign will likely push up the price of goods and services. Former EC chief Upreti also fingered infusion of money from indentified sources for contributing to inflation.

Kathmandu, June 24: The price of gold increased by Rs 3,000 per tola in the Nepali market Friday and was... Read More...

Will fight for defending democracy during life-NC general secretary Koirala

Make arrangements for students who returned from China due to COVID-19 to go back: Parliamentary committee
12 hours ago