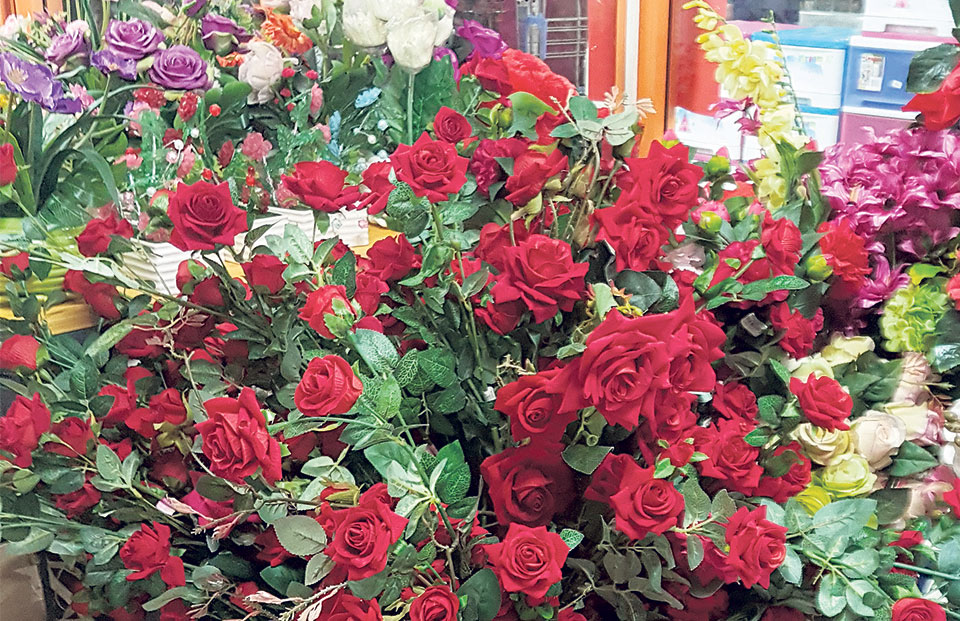 KATHMANDU, Feb 11: With the arrival of Valentine's Day and the celebrations that urban youths start a week prior to this day, the sale of rose has increased drastically in the Kathmandu Valley, according to traders.

February is considered as a season for love across the globe as Valentine's Day falls on the fourteenth day of this month. The hype for this day is no less in Nepal -- especially in city centers such as the Kathmandu Valley.

Speaking with Republica, Ram Lama of Fresh Flower Shop at Tripureshwar, said: “There has been a surge in flower sales with the arrival of February. Red Roses are in popular demand and people of all ages come to purchase rose for their significant others.”

He added: “In other months, usually only 1,000 to 1,200 roses were sold. However, in February, our shop alone has imported 12,000 pieces of roses, and the majority will be sold for Valentine's Day celebrations.”

Goma Tamang of New Florist Shop at Tripureshwar seconded Lama's claim. “There has been a drastic rise in demand of red roses this February, and in fact the demand has increased than the last year,” She said. “There has been a leap in sales of roses on February 7th, which is celebrated as the Rose Day, and the first day of valentine's week.”

Tamang stated that people of all ages have sought to purchase rose as gift, including children as young as nine years old. She explained: “The trend and culture of Valentine's Day has spread over to Nepal due to globalization, and it has most prominently influenced youth aged between 15 and 30.”

Majority of the roses in the country come from India. He said, it takes around three to four days for roses to arrive in Nepal from India. The preservation is easy: they are simply dipped in water. In summer, flowers are also brought through flight.

The demands for both natural and artificial roses are on the rise. Sabin Byanjankar, branch manager of Bhatbhateni Supermarket at Tripureshwar, told Republica: “The demand for artificial roses is very high in the valentine's season. This is mainly due to the fact that these flowers are non-perishable and can be used to decorate rooms even long after the Valentine's Day fever subsides.” He further added that bouquets of artificial flowers are a popular gift item for other celebrations as well.

While traders consider the demand for roses to have increased for Valentine's Day, officials of the Department of Customs say that it is also due to the onset of Nepali marriage season that coincides with the valentine's season. “Along with the rise in demand and revenue of majority of commodities this year, the import of rose will also increase to certain extent,” said Shiva Bhandari, director of the department.

Other commodities on popular demand during the valentine's season include soft toys, perfumes, and chocolates. Restaurants' sales are also certain to rise during this season, according to entrepreneurs.

KATHMANDU, July 30: Lawmakers have demanded no more delay in distribution of grants to earthquake survivors for house re-construction. ... Read More...

Demand to revisit Comprehensive Peace Accord

School operators demand stern action against those behind bomb scare

KATHMANDU, Sept 20: Private school operators have demanded with the government to take action against those involved in the bomb... Read More...