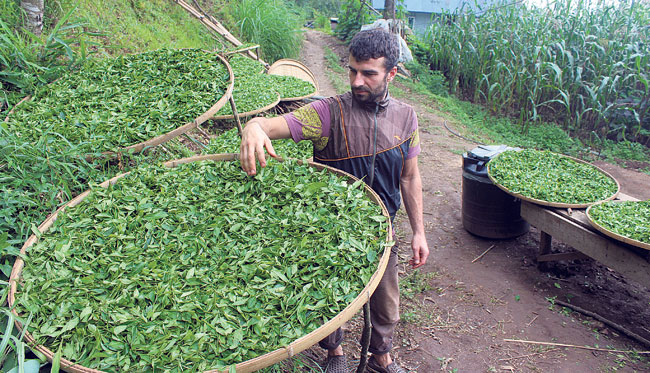 ILAM, Aug 4: International demand for tea produced in Ilam district was hit hard when a test in Germany few months ago revealed that it contained a harmful chemical called 'anthraquinone', or simply 'acque'. After a period of drop in its demand, of late demand for Ilam tea has shown significant improvement in recent days, especially in Europe and the USA.

According to tea manufacturers and traders, demand for Nepali tea in the international market was not encouraging in the first picking season this year. Sellers in other countries had hesitated to buy it after the chemical was found in tea produced from some of the tea estates in eastern hills of the district last year. However, as Ilam tea is known worldwide to be of high quality, the demand gradually started increasing.

“Just recently, a Chinese businessman contacted us to make a recurring deal of 200,000 kg organic tea per year,” said Sarad Subba, operator of Jasbire Tea Processing Industry situated at Maipokhari-2 of the district. “Demand for organic tea produced in Ilam tea is still growing in various countries, including The Netherlands, Denmark, France and the USA. As long as we maintain the quality, our tea would always be in demand and we don't have to worry about it,” he added.

Nepal produces varieties of high-quality teas that cater to the varied needs of global customers. Quality tea is sold at €100 per kg in foreign markets.

As many as 35 species of tea is produced in Subba's industry. Among them, species such as Sunkesari, Kothidada Beauty, and Aeseylukharka are sold in international market. Among others, Tatopani Tea Company of The Netherlands is his major buyer.

Likewise, Chinese are also among the major customers of Nepali organic tea. “Tea traders in China know very well what types of tea is popular in their market. In order to adopt better in Chinese market, tea-inspection specialists from China will now visit us time to time and teach us tea processing methods to match the type of tea currently high in demand in Chinese market,” said Subba.

Even prior to the new deal with Chinese traders, tea entrepreneurs from various countries including France and Germany have been sending their specialists to teach Nepali manufacturers ways to process tea to suit the palate of their customers. According to entrepreneur Subba, such specialists personally visit farmers' home and give them various lessons, including refined tea plucking methods and packaging.

Adding that his factory produces about 2,000 kg high quality tea annually, Subba said that demand for tea never really slumps. “This is an industry where there really isn't any need to worry about demands. We do not even have to hold stocks. Whatever is produced gets sold immediately as long as we maintain the quality of our produce.”

Tea traders and entrepreneurs across the country have long been stressing on improving the quality of tea produce. “Organic has become a necessity in tea production. It has already become a minimum quality acceptable in European markets. However, it is wrong to think that the word “organic” in front of tea automatically stands for quality production. It may not sell well in the market. But quality organic teas always have demand in the markets,” said Aarsee Nepal, managing director of Sakhejung-based Himalayan Sangrela Tea Producers Pvt Ltd.

According to her, European customers have started seeking other standards in tea production, such as eco-friendliness and bio-friendliness. Stating that her company produces about 115,000 kg of tea annually, she added that demand for tea has dropped slightly than last year.

In the past few weeks, Indian tea producers and traders have been seeking ban on import of non-organic orthodox tea from Nepal in their country.

However, tea producers in the country are not much worried about such demands as it would not affect the demand of Nepali organic tea in Indian markets.

In contrast, non-organic tea has been selling well in third-world countries, according to Subash Sanghai, chairman of Trebeni Sangai Group.

“There is a drastic difference between the pricing of organic and non-organic tea in Europe and America. However, this does not mean that non-organic tea doesn't sell well there,” he said. His company has leased seven government tea gardens in Ilam and Jhapa and produces about 2.3 million kg tea every year.

Keeping health issues in mind, some organic tea producers in the country have demanded the government to make all the production of tea organic in Nepal. They have argued that this step not only have health benefits for consumers, but also helps the economy grow.

However, those in opposition say that the move could do more harm than good. Organic production takes at least three years to complete. And with the lengthy time, the production can be affected by fertilizers shortage and other challenges, according to non-organic tea producers.

ILAM, July 25: Tea producers in Ilam are facing difficulties in meeting the demand from international buyers Although the district is... Read More...

ILAM, Oct 31: European tea traders are demanding Nepali tea in large quantities after disruption of their import from Darjeeling due... Read More...

KATHMANDU, Sept 11: Israel is all set to hire more than 60 caregivers from Nepal under the proposed Government-to-Government recruitment system,... Read More...