Demand for dried apples on the rise 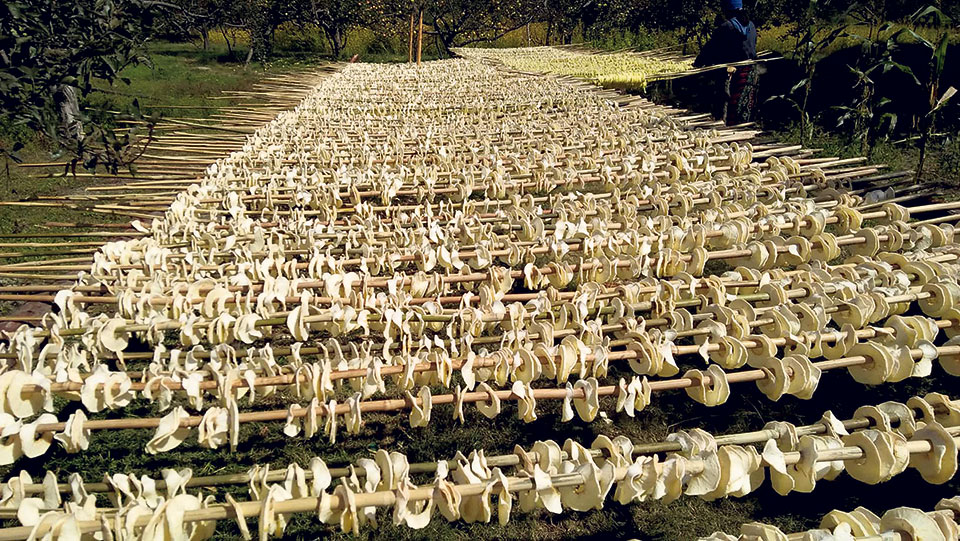 MUSTANG, Oct 15: Youths of Mustang are busy preparing dried apple slices. As dried apples fetch good price during off season, many farmers prefer to slice apples and dry them for future use rather than sell them at lower price during flush season.

Most of the farmers of Thasang, Gharjhong and Barha Gaun Muktichhetra Rural Municipality of are involved in production and trade of sliced dried apple. Talking to Republica Balkrishna Adhikari, senior horticulture officer, said that dried apple has become one of the popular souvenirs that tourists visiting the districts take to their home. According to local farmers, dried slices of Golden Delicious apples taste better. Dried apple slices retail for a minimum of Rs 1,000 per kg.

“Dried apple is easier to store and has longer lifetime,” Adhikari said, adding, “Both domestic and foreign tourists prefer to buy dried apples produced in the district.”

Ram Karki, who migrated to Mustang 20 years ago looking for a job, is now busy preparing dried apples. He is involved in the traded for the past seven years. “Dried apple gives us good profit as it can be sold during off season when supply of apple is near to nil,” Karki said. “Our business suffers only if there is problem in apple production due to bad weather.”

Karki is giving employment to seven workers. He produces up to 25 kg of dried apple every day. He makes profit of around Rs 200,000 per season.

Meanwhile, traders are reaching to different farms of the district has apple harvesting season has begun. There is high demand for apple varieties like Golden Delicious, Rich Red Delicious and Royal Delicious. However, traders prefer the latter to varieties as Golden Delicious apples are difficult to transport.

“That is why locals started producing dried apples,” added Karki.

Similarly, siblings Som Chhetri and Sarad Chhetri from Ghapjhong-1 earn Rs 30,000 to Rs 40,000 per month from windfall apples alone. They prepare dried slices as well as juice and the popular Marpha brandy. Likewise, Lal Bahadur Pun from Thasang is earning around Rs 100,000 per season from dried apples.

“Customers themselves come to our place to buy dried apples,” Pun said, adding: “The demand is increasing with every passing year.”

Mustang through Bidhata’s eyes on display

Bidhata has been showcasing the theme of architectural beauty intertwined with history, culture and religion of Mustang since, her visit... Read More...

Ford Mustang celebrates the 100th anniversary of the RAF

This unique Eagle Squadron Ford Mustang has been created to mark the 100th anniversary of the Royal Air Force and the... Read More...