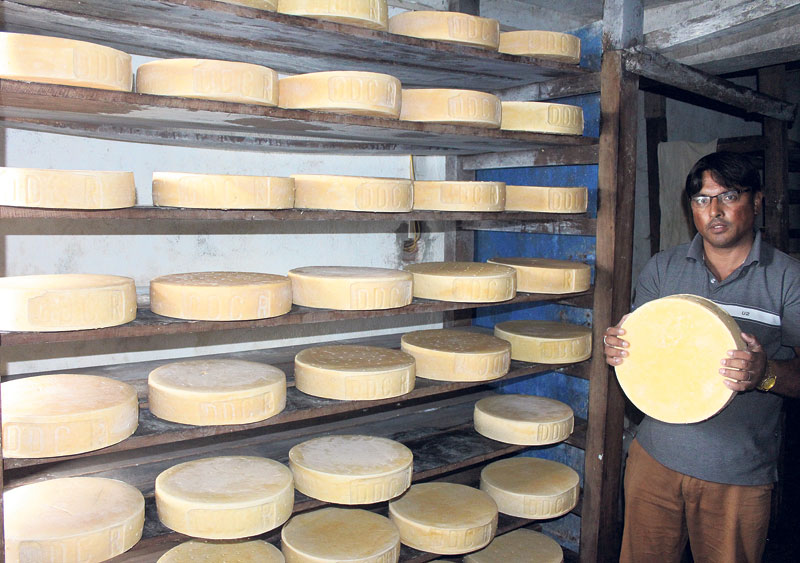 Ganesh Puri, manager of a cheese factory in Rakshay of Illam district, shows shelves of cheese ready to be supplied to the market.(Bhim Chapagain/Republica)

ILAM, Aug 31: The demand for cheese, which was in downturn since last year's earthquake, has once again surged in Ilam. Cheese entrepreneurs who were upset by declining demand in the market are now facing hardship in catering to the demands.

Most of the cheese in the district is produced in Rakshay, Nayabazzar, Pashupatinagar, Ranke, and Topetar factories. The produce is sold in Kathmandu, Pokhara, Chitwan and other districts.

“The demand for cheese has improved since 3-4 months. At present, we are not even able to meet the demands,” said Ganesh Puri, manager of Rakshay Cheese Production Center. “A large quantity of cheese was dumped last year due to sharp decline in demand. However, this year has turned out to be boon for us,” he added.

The Nayabazzar based cheese factory collects 1,300 liters of milk per day for manufacturing cheese. According to Kumar Aale, in-charge of the factory, they are producing and selling 130 kg cheese per day.

“High demand for cheese in the market is very encouraging. Despite putting all our efforts, we have not been able to meet the demand,” said Aale.
According to the data of District Animal Service Office, 23 cheese and dairies industries in the district produce 5.01 million kg of cheese annually generating around Rs 175 million in earnings.

RAJBIRAJ, Oct 30: Relatives of the passengers killed in Dhading bus plunge on Saturday have urged the government to find out... Read More...

Nepal yet to cash in on global demand for herbs

KATHMANDU, Jan 12: Lawmakers have registered an amendment to the Local Level Election Bill, demanding that an election at the local... Read More...