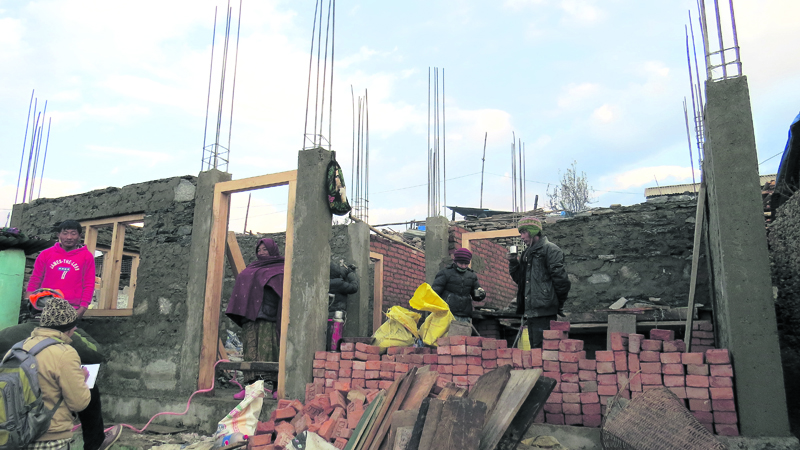 GORKHA, June 17: The rise in infrastructural works in Gorkha has increased the demand for aggregates by a huge number and has helped the district authority to collect two times more revenue compared to past previous years.

According to the District Coordination Committee, revenue of Rs 11.5 million has been collected from aggregates this year. A total of Rs 5.3 million was collected in the last fiscal year. The rapid rise of infrastructural work has increased the demand for construction materials significantly, according to the committee.

“People these days have realized the need of building earthquake resilient houses and that has increased the demand for stone, sand and other construction materials,” Local Development Officer (LDO), Narayan Acharya said. “The revenue collected on aggregates this year by the District Coordination Committee is certain to be doubled in comparison with previous years,” he said. “The committee had collected revenue of Rs 1.2 million in the Fiscal Year 2014/2015 and Rs 5.3 million in the FY 2015/2016. A total of Rs 7.4 million has already been deposited in the account of the committee and the construction companies will deposit a total of Rs 4 million in the account.”

As the Environmental Impact Assessment (EIA) and local stakeholders afterward decided to allow the use of light machines to extract aggregates, it eased the work and further helped the authorities in collecting more revenue. “The demand for aggregates is very high. Aggregates can be extracted under the guidelines using light equipment,” said Lok Bahadur Thapa, the coordinator of Aggregates Monitoring sub-committee, said.
According to him, there will be no adverse environmental impacts if aggregates are extracted as per the guidelines. “Use of heavy equipment for extraction can put adverse impact on environment. If equipment are monitored regularly, then revenue collection will be more systematic. The revenue collection will also increase if the equipment are checked on a regular basis,” he added.

Meanwhile, extraction of aggregates in the district has been prohibited for three months starting June 15. As earthquake victims are rapidly building their new homes, the district is seeing shortage of aggregates.

Locals say they are forced to pay more money for aggregates due to shortage. "We are paying as high as Rs 9,000 for a tractor-load of sand," a local said.