MUMBAI, Oct 21: Deepika Padukone took to Twitter on Sunday to announce the much-awaited news of her wedding. After months of speculation, Deepika tweeted the wedding card announcing that she would be getting married to Ranveer Singh on November 14 and 15 of this year.

The wedding card read, “With the blessings of our families, it gives us immense joy in sharing that our wedding is set to take place on the 14th and 15th November 2018.”

“We thank you for all the love you have showered upon us over the years and seek your blessings as we embark on this incredible journey of love, loyalty, friendship and togetherness,” read the actor’s post.

Deepika Padukone and Ranveer Singh first shared screen space in Sanjay Leela Bhansali’s 2013 romantic drama Goliyon Ki Raasleela Ram-Leela, and it’s been reported that this is where they fell for each other. During the same time, Ranveer was quoted as saying by The Times of India that his love life “is good. It’s rocking. I love being in love. It’s the best feeling in the world. I have never felt like this before.”

At that time Deepika was taken ill with dengue and Ranveer had then said in an interview that he was struck with ‘Loveria.’It was reported that later when Deepika started filming Happy New Year, Ranveer flew to Dubai to spend some time with her. This was followed by photos of the couple where they were seen partying and having a blast together at Shah Rukh’s party. In fact, Ranveer has often visited Deepika on the sets of her films over the years; he was spotted on the sets of Chennai Express as well as that of Piku.

The actors, since then, have frequently been photographed in each other’s company at various parties and film events, therefore sparking relationship rumors.

During the IIFA 2015, Ranveer even went down on one knee and proposed to his lady love in front of the entire film fraternity. And off late, the two have been showering love on each other on various social media sites. 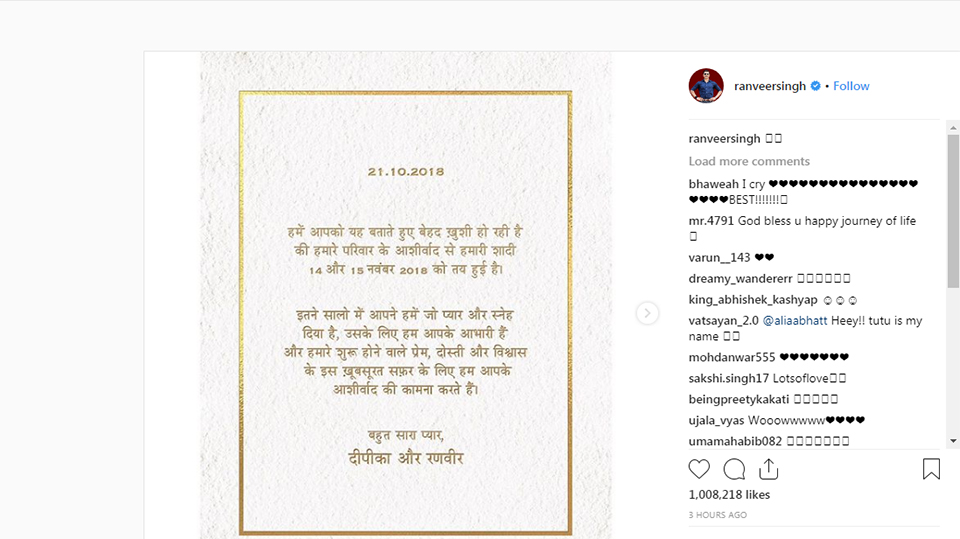 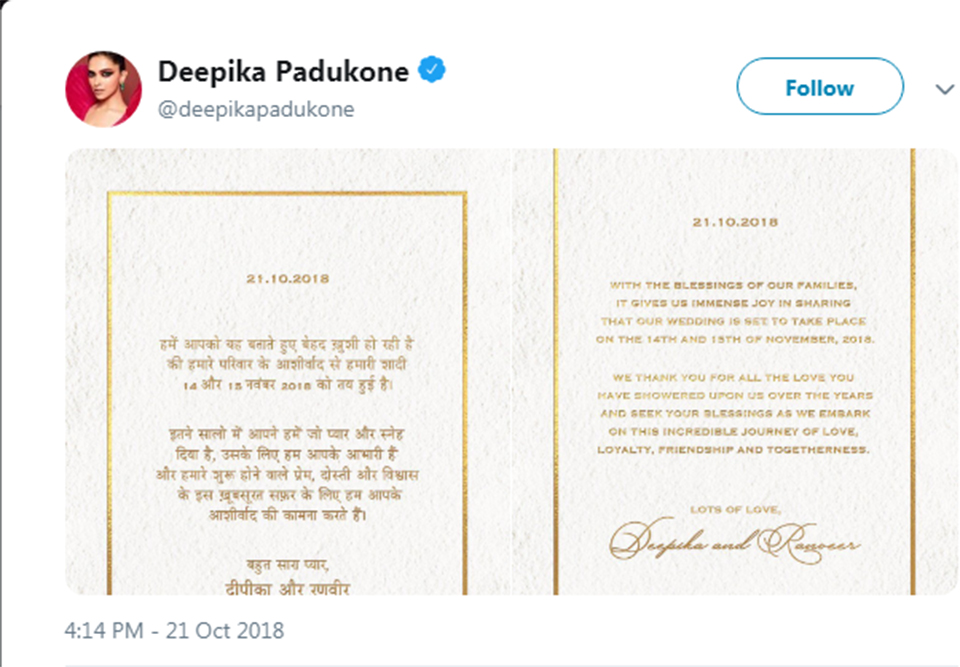 Nov 15: Fans have waited with bated breath for the first official pictures of Deepika Padukone and Ranveer Singh’s wedding ceremonies. It has now... Read More...

MUMBAI, Nov 10: Deepika Padukone and Ranveer Singh have left for Italy where they will get married after a six-year-long relationship. ... Read More...

Deepika shares how Ranveer is prepping for their first wedding anniversary

Preparations are in full swing for actors Deepika Padukone and Ranveer Singh who will be celebrating their first wedding anniversary... Read More...