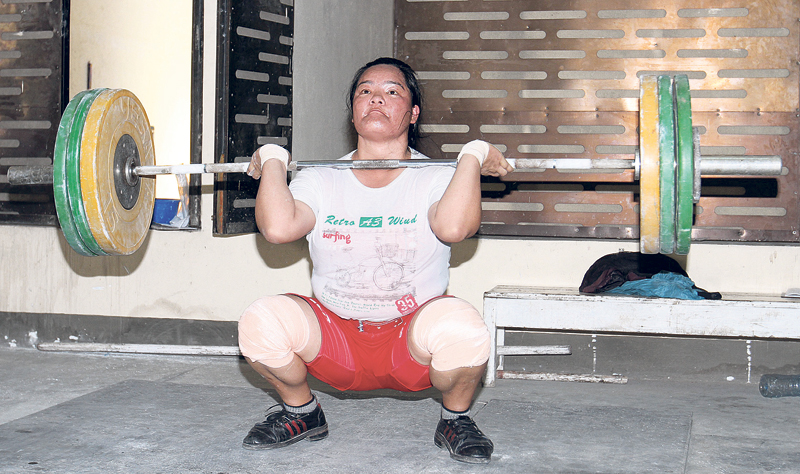 KATHMANDU, July 19: The strongest woman of the country, Tara Devi Pun, has never secured anything other than gold in the domestic weightlifting competition. The 33-year old is one among the five nominees for the people's choice award of the annual Pulsar Sports Award to be held on Thursday in the capital.

Tara will be competing against footballer Nawayug Shrestha, cricketer Sandeep Lamichhane, volleyball player Prativa Mali and table tennis player Nabita Shrestha. The winner will be decided on the basis of SMS votes and Facebook likes. The winner will be rewarded with a Pulsar motorbike.

Tara, who hails from Myagdi, started her career as weightlifter some 17 years ago and has never looked back. “I cannot exactly say how many events I competed in. But I have won gold in all domestic competitions since I took weightlifting. I think I gave my best in all tournaments I played so far,” says Tara.

Tara, who represents Nepal Police Club in the domestic tournaments, has also won the title of the strongest woman since the last five years for her feat in the game. Finishing with gold in her debut domestic tournament back in 2058 BS changed the course of her career.

Not only in domestic tournaments, Tara has also left her mark at international arena as well. She claimed gold medal in the first edition of the South Asian Weightlifting Championship held five years ago in Nepalgunj. She was the lone player from Nepal to win gold then. Later, she was declared the female player of the year of Pulsar Sports Award 2068.

Women's weightlifting was included for the first time in the last edition (12th) of South Asian Games and Tara succeeded bronze in the above 75 kg category. Similarly, she set three national records in the 26th Asian Weightlifting Championship held in Phuket, Thailand, last year. She lifted total of 166 kg including 71 kg in snatch, 95 kg in clean and jerk to better her own record.

Regarding her nomination in the peoples' choice award, Tara said, “It is a special kind of award and being nominated itself is an achievement.”

According to weightlifting chief coach Sunil Joshi, Tara is a hard working and disciplined player. “Dedication and discipline has made Tara a successful player,” he said.

Members of the national volleyball team, currently in closed camp for two-match friendly against India, played the match at the New Bus Park on Monday. The 17-member team was divided into Nepal Red and Nepal Blue. National skipper Binita Budathoki captained the Red Team and Manju Gurung, the vice captain, took the charge of Blue team.

With a view to garner support for Prativa, Dhorpatan Sports Training Center initiated the friendly match and collected Rs 31,000 for voting.

According to Manju, the vice captain, the friendly would strengthen campaign for Prativa in the Sports Award. “It is matter of pride to be nominated for the Sports Award. Volleyball players hardly play one international tournament in a year and getting nominated for Sports Award is good for whole volleyball family in the country,” said Manju, who was the winner of same category which was known as popular player of the year then. Earlier, Sipora Gurung, Ramila Tandukar and Saraswati Chaudhary - all from volleyball -- had also won the same award.

KATHMANDU, May 30: Young Nepali cricket sensation Sandeep Lamichhane has left for England on Tuesday to take part in a T20I... Read More...

Actress Angelina Jolie has filed for a divorce from actor Brad Pitt after 12 years together including two years of... Read More...