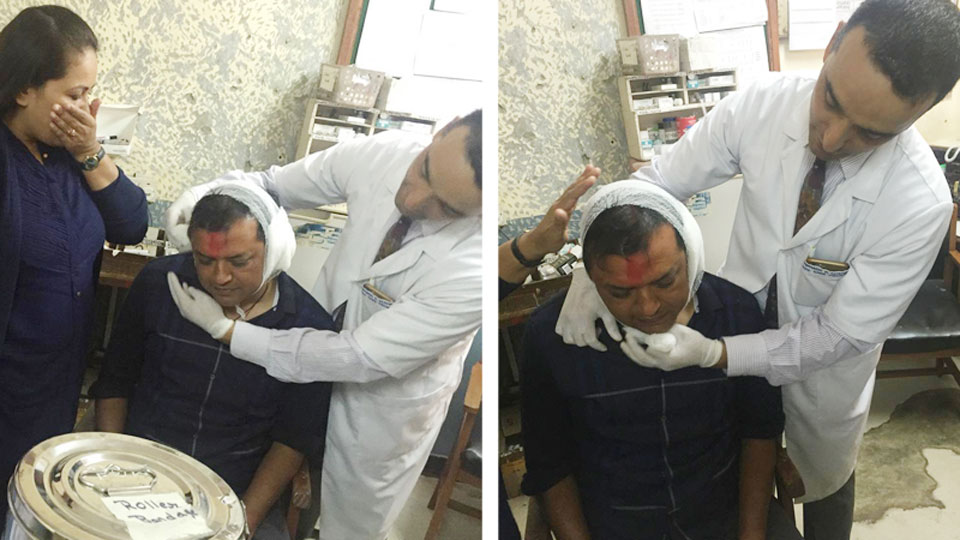 As many as 11  people including Nepali Congress candidate Gagan Thapa have been injured in a bomb attack at Budhanilkantha municipality on Monday afternoon. Gagan Thapa, NC candidate from Kathmandu constituency 4  was visiting voters on a door-to-door campaign at Mato Colony, Chapali when an unidentified group hurled a bomb, targeting Thapa.

At least thirty people have been taken into custody suspecting their involvement in bomb attack targetting Nepali Congress leader Gagan Thapa who is the candidate to the House of Representatives from Kathmandu-4.According to the Metropolitan Police Circle spokesperson SP Ramdutta Joshi, police have suspected that they are cadres of Biplav-led Nepal Communist Party.

Nepali Congress has condemned the bomb attack carried out targeting NC candidate Gagan Thapa in Budhanilkantha municipality on Monday afternoon.Issuing a press release immediately after the attack NC said, “Nepali Congress strongly condemns such types of lethal attacks carried out targeting parliamentary and provincial candidates and cadres. This kind of attack has violated the inherent right of an individual to take part and hold elections in a free and peaceful manner and undermined the democratic norms and values.”

With the second phase of the elections to the House of Representatives and Provincial Assemblies just around the corner, election fever catches up almost all settlements in Palpa. But, the marginalised Bote community residing in Dailatung of Bagnaskali Rural Municipality-7, is yet to be touched by the otherwise festival with the people of this community lacking any excitement.

Rahul Gandhi, the scion of India’s Nehru-Gandhi political dynasty, submitted nomination papers Monday to succeed his mother as president of the main opposition Congress party, which previously governed the country for decades.Without a serious rival for the top party post, Gandhi is likely to be elected Dec. 16.

Nepal Electricity Authority (NEA) has clarified that there would be no load-shedding except the technical problem. The NEA made this... Read More...

NCP should not form new govt under NC’s leadership: Lalbabu Pandit
21 hours ago
NC decides not to give its words as NCP factions solicit support to form govt
15 hours ago
NCP (Dahal-Nepal faction) leaders hold meeting with JSP leaders to explore possibility of power-sharing deal
23 hours ago

National Payment Gateway delayed by over a year; some see collusion
26 minutes ago