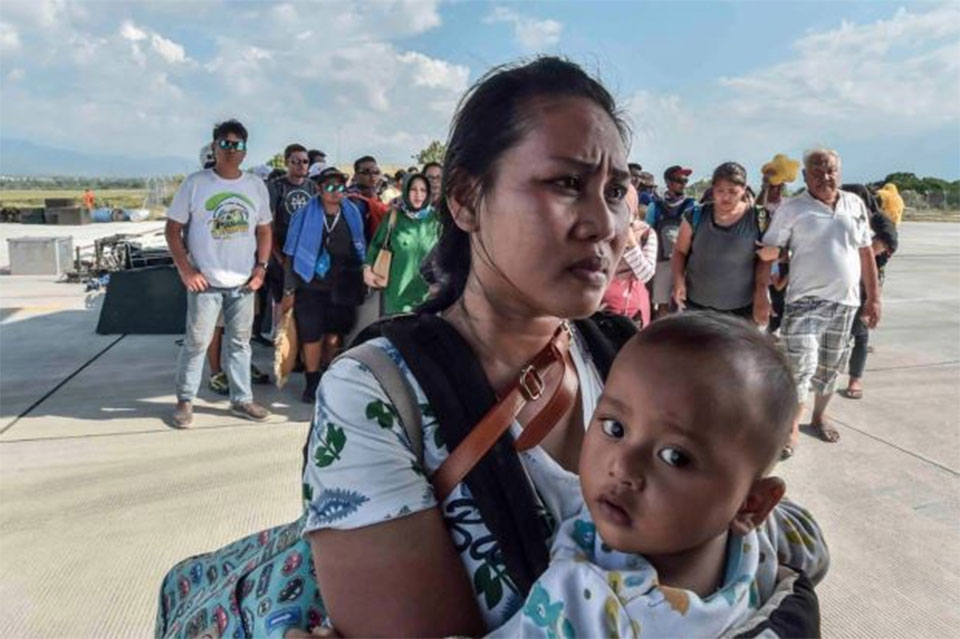 People injured or affected by the earthquake and tsunami wait to be evacuated on an air force plane in Palu, Central Sulawesi, Indonesia, September 30, 2018. Antara Foto/Muhammad Adimaja via REUTERS

PALU, Sept 30: More than 400 people were confirmed killed, many swept away as tsunami waves triggered by a massive earthquake crashed into the Indonesian island of Sulawesi, and authorities expected the toll to rise sharply on Sunday as news arrives from remote areas.

Dozens of people were reported to be still trapped in the rubble of a hotel in the city of Palu, which was hit by waves as high as six metres (20 feet) following the 7.5 magnitude earthquake.

Hundreds had gathered for a festival on the city’s beach when the wall of water smashed onshore at dusk on Friday, sweeping many to their deaths and destroying anything in its path. Indonesian President Joko Widodo was scheduled to visit evacuation centres in the city on Sunday.

The Head of the National Disaster Management Agency (BNPB), Willem Rampangilei, told reporters in Sulawesi late on Saturday the death toll from Palu had reached 420 people, according to news website Kompas.

“It’s estimated that 10,000 refugees are scattered in 50 points in Palu city,” he was quoted by Kompas as saying. “We are having difficulty deploying heavy equipment to find victims under the rubble of buildings because many of the roads leading to Palu city are damaged.”

Earlier authorities had put the death toll at 384.

Amateur footage shown by local TV stations showed waves crashing into houses along Palu’s shoreline, scattering shipping containers and flooding into a mosque in the city.

Dozens of injured people were being treated in makeshift medical tents set up outdoors.

Photos confirmed by authorities showed bodies being lined up along the street on Saturday, some in bags and some with their faces covered with clothes.

BNPB spokesman Sutopo Purwo Nugroho told a briefing in Jakarta the damage was “extensive” and said thousands of houses, hospitals, shopping malls and hotels had collapsed. A bridge was washed away and the main highway to Palu was cut off due to a landslide.

“The tsunami didn’t come by itself, it dragged cars, logs, houses, it hit everything on land,” Nugroho said, adding the tsunami had travelled across the open sea at speeds of 800 kph (500 mph) before striking the shoreline.

Nugroho said casualties and damage could be greater along the coastline for 300 km (200 miles) north of Palu, an area called Donggala, which is closer to the epicentre of the quake.

The Red Cross said staff and volunteers were heading to the affected areas.

“We’re now getting limited communications about the destruction in Palu city, but we have heard nothing from Donggala and this is extremely worrying. There are more than 300,000 people living there,” Red Cross said in a statement.

“This is already a tragedy, but it could get much worse.”

Australia’s Prime Minister Scott Morrison said Indonesia had not yet asked for help but he contacted President Joko Widodo overnight to offer support and deep sympathies.

“It is horrifying,” he told ABC TV’s Insiders programme on Sunday.

“To secure the scene and make sure that issues do not deteriorate further, I think, will be a big challenge,” he said.

“But I know that President Widodo will be taking a very direct and close interest in how these issues are managed and if he needs our help, he’ll have it.”

More than half of the 560 inmates in Palu’s prison escaped after its walls collapsed during Friday’s quake, according to state news agency Antara.

“It was very hard for the guards to stop the inmates from running away as they were so panicked and had to save themselves too,” Antara quoted warden Adhi Yan Ricoh as saying. “We haven’t even have time yet to report this incident to our superiors.”

Over a hundred inmates staged a separate escape from a prison in Donggala.

Prison warden Saifuddin told Kompas inmates had started a fire in the detention centre after authorities refused their demands to be released to check on their families.

In Palu’s Roa-Roa Hotel, which was completely flattened by the quake, many people were still missing.

“Communication is cut off. All we knew is that 24 guests were successfully evacuated and one has died,” hotel owner Ko Jefry told Metro TV on Saturday night. “It is estimated that 50 to 60 people remain trapped.”

Amateur video footage showed trees, buildings and a communications tower being swept through a rural landscape. The landslide was caused by liquification of the soil, according BNPB’s Nugroho.

Indonesia’s meteorological and geophysics agency BMKG issued a tsunami warning after Friday’s quake, but lifted it 34 minutes later. The agency was widely criticised on Saturday for withdrawing the warning too quickly, though officials said they estimated the waves had come within the time the warning was in force.

The military has started sending in cargo planes with aid from Jakarta and other cities, authorities said, but evacuees still badly needed food and other basic necessities.

Palu’s airport was reopened only for relief efforts and would remain closed until Oct. 4 for commercial flights, Nugroho said. The airport’s runway and air traffic control tower were damaged in the quake, authorities said.

Indonesia sits on the Pacific Ring of Fire and is regularly hit by earthquakes, including the devastating Boxing Day 2004 earthquake and tsunami that killed more than 120,000 in northern Aceh province alone.

In August, a series of major quakes killed more than 500 people in the tourist island of Lombok and destroyed dozens of villages along its northern coast.