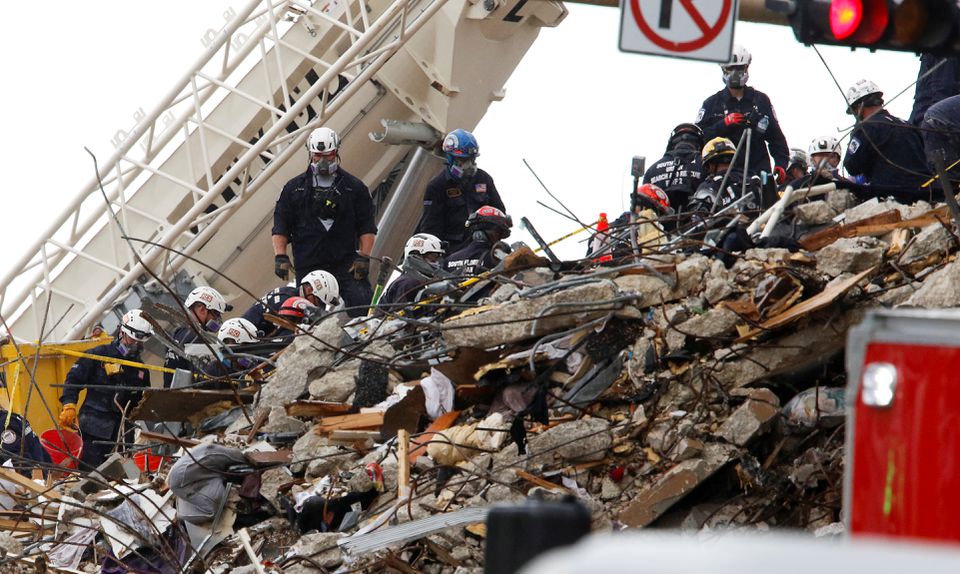 SURFSIDE, July 1: Six more bodies have been found in the ruins of a Miami-area condominium tower, officials said on Wednesday, bringing the confirmed death toll to 18 nearly a week after the building collapsed.

Nobody has been pulled alive from the mounds of pulverized concrete, splintered lumber and twisted metal since the early hours of the disaster on June 24 in the oceanfront town of Surfside, Florida, adjacent to Miami Beach.

Authorities put the number of people missing and feared trapped in the ruins of the Champlain Towers South condo at 145. Two of the 18 confirmed fatalities were children, aged 10 and 4, Miami-Dade County Mayor Daniella Levine Cava told a news conference.

"The loss of children is too great to bear," Levine Cava said. "Our community, our nation and the world all are mourning with these families who have lost loved ones."

Among the six latest victims confirmed, the remains of four were recovered overnight Tuesday into Wednesday, and two were located later on Wednesday, Levine Cava said.

Officials have said they still hold out hope of finding survivors. Surfside Mayor Charles Burkett said in an interview he had promised families that rescue crews were "not leaving anyone behind" as teams dig deeper into the rubble.

"We've not gotten to the bottom. We don't know what's down there," he said. "We're not going to guess. We're not going to make a life-or-death decision to arbitrarily stop searching for people who may be alive in that rubble."

Burkett said that every day the mound of wreckage is visibly shrinking, indicating progress.

The search-and-rescue crews consist of about 200 specialists working around the clock in 12-hour shifts, with hundreds more personnel - firefighters, police, engineers, environmental safety experts and others - serving in support roles. Two teams of dogs were helping to scour the wreckage - one trained to sniff out survivors, the other to detect cadavers.

Investigators have not concluded what caused nearly half of the 40-year-old high-rise to collapse as residents slept in the early hours of last Thursday.

But in 2018, a report prepared by the engineering firm Morabito Consultants ahead of a building safety recertification process found structural deficiencies in the 12-floor, 136-unit complex that are now the focus of inquiries. read more

As recently as April, the condo association's president warned residents in a letter that severe concrete damage identified by the engineer around the base of the building had grown "significantly worse."

On Wednesday, the relatives of a missing resident, Harold Rosenberg, filed a lawsuit in Florida's 11th Circuit Court against the Champlain Towers South Condominium Association Inc, Morabito Consultants Inc and SD Architects P.A., which the lawsuit says was retained by the association to repair the building.

The lawsuit says the defendants "ignored obvious and shocking warning signs and indications that a catastrophe was imminent." It seeks unspecified damages for negligence.

"Given the location of his residence, Harold Rosenberg is likely located at the very bottom of the mountain of rubble that search-and-rescue personnel have only begun to chip away at," the lawsuit said. "Hope is dwindling by the day."

The architect's firm could not be immediately reached for comment.

Brett Marcy, a spokesman for Morabito, said in a statement that the firm's 2018 report "offered detailed findings and recommendations regarding extensive and necessary structural repairs for the condo building."

Both Marcy and Maria Stagliano, a spokesperson for the condo association, said in separate statements that they could not comment on claims made in pending litigation but were working with investigators to understand why the building collapsed.

The state attorney for Miami-Dade County, Katherine Fernandez Rundle, said on Tuesday she would convene a special grand jury, apart from any potential criminal investigation, to examine building safety.

President Joe Biden and his wife, Jill Biden, planned to visit the scene of the tragedy on Thursday.

Fire officials have spoken of hearing faint sounds from inside the rubble pile - while acknowledging that such noises could come from settling of the ruins - and finding voids deep in the debris large enough to possibly sustain life.

But Miami-Dade Fire Rescue Chief Alan Cominsky said on Tuesday that search personnel faced a daunting task, hampered by intermittent showers and thunderstorms, and picking through compressed wreckage of 12 floors that collapsed onto one another, "all within that same footprint."

Debris removed from the rubble pile is being trucked to a collection site to be sifted through by detectives for bits of evidence that will be cataloged and photographed "for future investigative purposes," Miami-Dade Police Director Alfredo Ramirez said.

Hurricane season has arrived in Florida, and the state's emergency management director, Kevin Guthrie, said Wednesday he was making contingency plans should a tropical storm descend on the coast.

USA, July 26: Remains of the last person still listed as missing in the collapse of a Florida condominium tower... Read More...

SURFSIDE, June 30: Search-and-rescue efforts stretched through a sixth day on Tuesday at the site of a collapsed Florida condominium complex... Read More...

SURFSIDE, Fla., June 26: The death toll rose to five on Saturday at the site of the Florida building collapse where... Read More...

Substation at Nawalpur comes online, electricity supply expected to be reliable
37 minutes ago

Motorcyclist killed after collision with cargo truck
4 hours ago