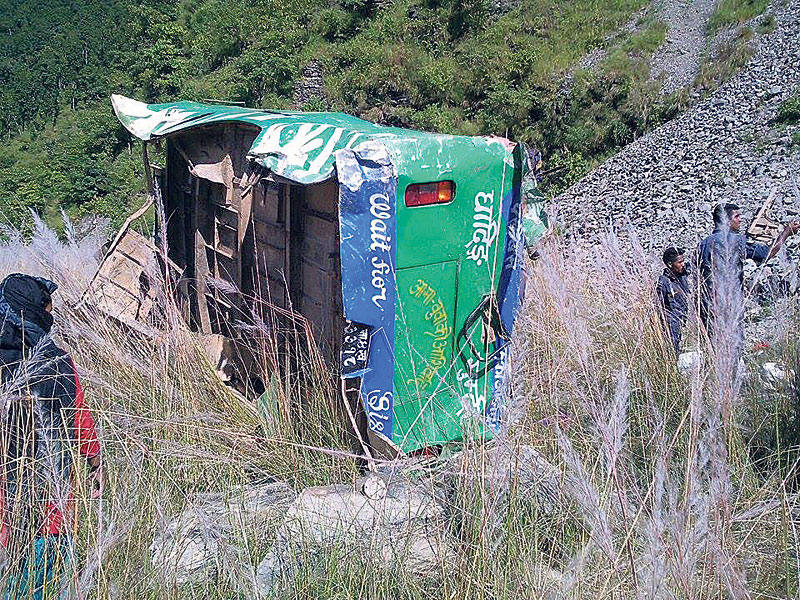 Wreckage of the passenger bus that fell off the road in northern Dhading killing at least 19 people on Tuesday morning. The bus was heading for Kimtang VDC from district headquarters Dahadingbesi met with an accident at Lapang in Marpak VDC.

Most of the dead and injured were earthquake victims

DHADING, Sept 27: At least 19 have people died while 15 were critically injured when a bus veered off the road in Dhading on Tuesday afternoon. Among the deceased, 18 died on the spot and one of the victims died while undergoing treatment at a hospital.

The ill-fated bus (Na 4 Kha 3318), heading for Kimtang VDC from the district headquarters Dahadingbesi, met with an accident at Lapang in Marpak VDC- 6. Thirty one people had boarded the bus from Dhadingbesi.

As many as 12 critically injured passengers were airlifted to the capital for treatment by Nepal Army helicopter. They are currently undergoing treatment at Tribhuvan University Teaching Hospital (TUTH) Kathmandu.

The bus veered off the road and broke into two pieces after the incident. According to eyewitness Gayatri Itani, a local teacher who was near the site during the accident, the bus lost control and skidded off the road in a narrow bend.

“Some passengers were travelling atop the roof of the bus at the time of the accident,” she informed. The accident site is some 32 kilometers away from the district headquarters Dhadingbesi. The Dhadingbesi-Kimtang road is the only route to connect northern part of Gorkha with the district headquarters. Locals are compelled to travel through the road section despite its poor condition.

Locals, police and passengers of a jeep trailing the ill-fated bus were involved in rescue after the accident. The cause of the accident is suspected to be overloading, according to DSP Dipendra Panjiyar, of the District Police Office (DPO), Dhading.

The victims had come to the district headquarters to collect the first installment of housing grants provided by the government. They were returning home after collecting the quake relief, according to locals. The government has started providing Rs 50,000 as the first tranche of reconstruction grant. However, they were not lucky enough to start the reconstruction process of their houses, shared the locals who are in deep grief after the tragic incident.

Eyewitness' account
“The bus veered off the road in no time,” said Yuwaraj Pant, a local teacher.

Many people were screaming for help from inside the wreckage of the bus. We rescued those who were crying in pain. The rescue was very tough due to the steep landscape.

Many people remained onlookers as they could not climb down the steep hill for rescue works.

Police reached the incident site within few minutes. They rescued those who were critically injured. Helicopter arrived soon after and rescued six injured people in the first trip. The remaining injured were airlifted later.

The accident site is considered to be a dangerous bend. Inexperienced drivers find it hard to steer vehicle in this road section. The driver who was driving the bus was experienced one, but he made a mistake by making people ride on the rooftop. I believe that the incident could have been averted if he had crossed the section by making people get off from the bus.

Relatives mourn
“I've lost everything,” said Binod Paudel, a kin of a deceased from Ramche.

“We had a small house which was damaged by the earthquake. My father died 13 years ago. My mother had told me to come home from the district headquarters soon as we had to start house reconstruction. But now I have lost her too, ” he added.

“We have many things to do. Please come home fast,” Binod quoted his mother as saying before riding the bus. “Those were her last words. Now I'm alone,” Binod told Republica.

Binod had purchased tickets for his mother Kamala Paudel and maternal grandmother Dil Maya Adhikari on Tuesday. In less than three hours of bidding farewell, he heard about the accident.

Survivor's account
“All passengers were screaming,” said Biki Thapa Magar, a survivor himself.
The bus left Dhadingbesi at 8:30 am. All the passengers were seated. The bus was carrying goods on rooftop. Local shopkeepers had sent it for Dashain. The bus was driving uphill road after passengers had meal at Lapangfedi. The bus was running on the edge of the road near the accident site. As it was about to complete the uphill journey, it lost control fell down the cliff. The bus driver then applied the brake. However, it did not stop the bus from skidding down the steep hill. All passengers inside the bus started screaming and shouting for help. I was just behind the driver's seat. I survived only because I left my body flexible. My grandfather died on the spot. We survived due to our luck.

DHADING, June 3: Family members of the 34 victims who lost their lives in a deadly bus accident in Dhading on... Read More...

KATHMANDU, Aug 26: President Bidya Devi Bhandari has expressed deep sorrow over the loss of lives in an accident in... Read More...

RSP Chairman Lamichhane warns of quitting govt if the party is denied home ministry
3 hours ago
UML in favor of reinstating Lamichhane as Home Minister, Maoist Center opposed to the idea
4 minutes ago

No decision on home ministry leadership until full text of SC’s verdict on Rabi Lamichhane is out: PM Dahal
17 minutes ago

Pokhara-Baglung Highway to be closed for upgrading
34 minutes ago