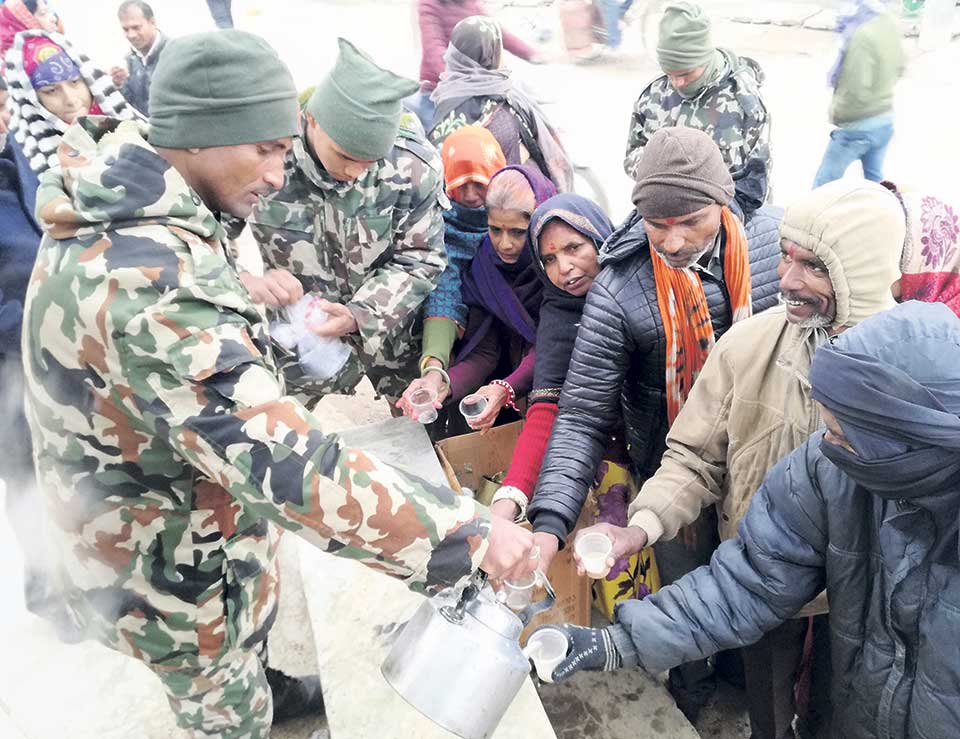 Nepal Army personnel distribute free tea to locals at Janak Chowk, Janakpur on Sunday. The entire tarai has been under the spell of biting cold for the past one week. Photo: Suresh Yadav

BIRATNAGAR, Jan 8: Foggy weather along with cold wave continues to adversely affect normal life in all tarai districts for a week now. With one after another person dying due to the frosting cold, the death toll has climbed to 15 within a week.

In order to avoid cold, people are found basking around bonfires. Despite that, the dipping temperature has left the people shivering. The freezing temperature has claimed six in Saptari, three in Siraha, three in Rautahat and two in Dhanusha over a week. After being unable to bear the biting cold, six years old son of Lav Kumar Sah of Golbazaar-4, Ram Ratna Mahato, 55 of Nangadimai Municipality-4, Kasaha and Ram Prasad Mahato, 80 of Golbazaar-2, Lalpur died in Siraha.

Locals light bonfire at their homes while sleeping to protect themselves from the freezing cold. Unfortunately, such fires were the reason behind the deaths of two women in Dhanusha.  Gita Devi Das, 40, of Mithilabihari Municipality-7, Tarapatti died after catching fire, according to police.  Similarly, Shyama Devi Mandal, 55, of Kamala Municipality-9, Dubarkot also died after catching fire.

The number of patients complaining about common cold, fever, pneumonia among others has increased significantly in hospitals. According to Dr Ramparichan Yadav of Janakpur Hospital, cold has mostly affected the children and elderly people. He also informed Republica that the people from poor and marginalized communities are worst hit by the cold. Various governmental and non-governmental organizations have started distributing warm clothes and timber to the poor and needy which to some extent has offered a relief to them.

SAPTARI, Dec 13: Cold wave has started affecting daily life in Mid-Terai since the mercury has begun to plummet for... Read More...