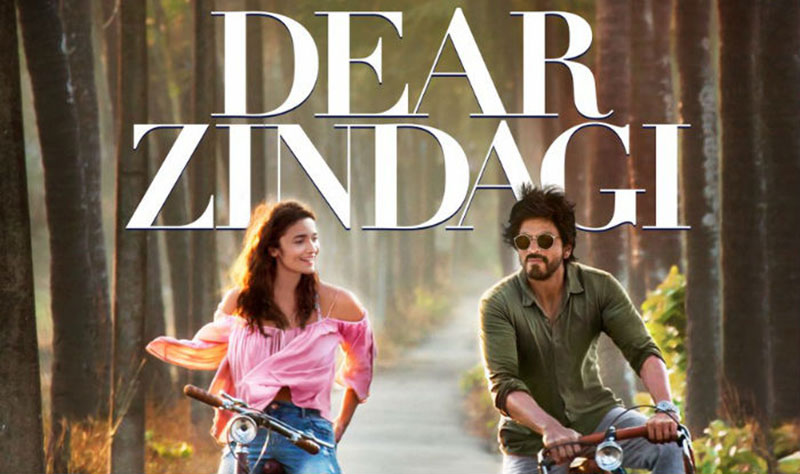 MUMBAI, Oct 19: Shah Rukh Khan and Alia Bhatt’s Dear Zindagi is that oasis of peace in the middle of a crazy, fast-paced life. It is that moment when you meet yourself. It is the feeling you get when you play with a child. It is the mood that envelopes you when you land in Goa on a hard-earned vacation.

The short one-and-a-half minute clip barely reveals any plot so we’ll have to draw on what we already know.


We have been eagerly waiting for the project ever since Alia Bhatt and SRK teased fans with their crazy banter on Twitter  and we couldn’t be happier to see the poster.

The poster capturing a perfect summer day will leave you smiling. Alia and SRK are seen on a bicycle on a breezy day surrounded by beautiful scenery.

Shah Rukh Khan appears to be playing a psychiatrist to Alia Bhatt’s character in the film, who simply ‘wants to be free!’ after a string of relationships that may or may not have worked out.

Alia will be playing the role of Kaira, a budding cinematographer, who is in search of the perfect life but some unforeseen circumstances change her life. While SRK’s role is yet to be revealed.

Earlier, it was said that will see Pakistani actor Ali Zafar — who is playing a key role in the film — in the film’s trailer. However, it has now emerged that there will be no trailers at all, instead, the film will have a series of teasers.

Film’s director Gauri Shinde told a tabloid, “We have decided not to take the conventional route for this movie. We will release small videos titled Dear Zindagi take 1, take 2, take 3 and so on… The idea is to invite the viewer bit by bit into the experience of the film… It was Shah Rukh’s suggestion and I was with him on that.”

Produced by Gauri Khan and Karan Johar, the film stars Aditya Roy Kapur, Ira Dubey and Kunal Kapoor. It is slated to release on November 25 this year.

After the release of their movie Dear Zindagi, actress Alia Bhatt says she has started missing her co-star Shah Rukh Khan. ... Read More...