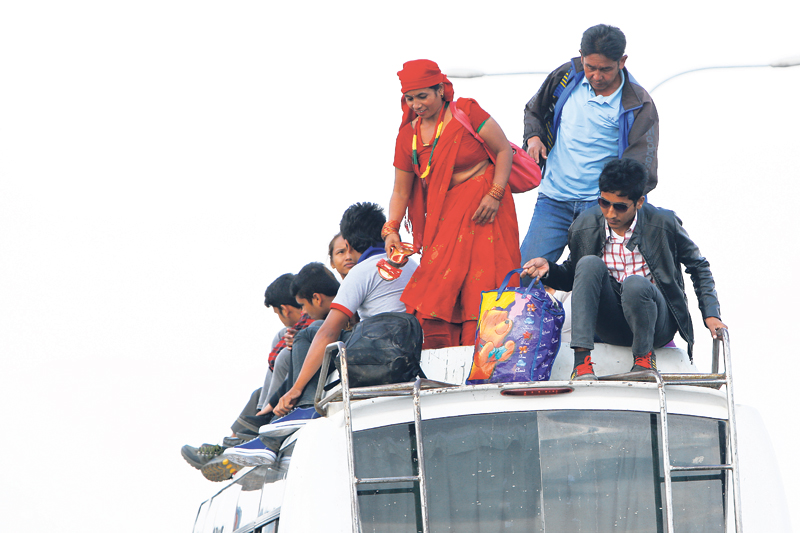 Festive activities increase in the market
KATHMANDU, Sept 8: With Dashain and Tihar festivals around the bend, festive shoppers are thronging major market centers across the country to purchase stuffs for Dashain, Tihar and Chhath festivals. Traders are sparing no effort to ensure that supply of essential commodities is not affected during the festive season. Similarly, the government agencies are also stepping up efforts to control black-marketing and other market anomalies.

60,000 GOATS FOR VALLEY THIS DASHAIN
As many as 60,000 goats, including mountain goats, are being supplied to the Kathmandu Valley for this Dashain. While livestock traders are supplying around 57,000 goats, state-owned Nepal Food Corporation (NFC) is selling 3,000 goats at subsidized rate to stabilize the price.

Shiva Hari Shrestha, general manager of NFC, said that they would begin selling goats in the Kathmandu Valley on the second day of Dashain festival i.e. a day after the Ghatashtapana. "Though 3,000 goats are insufficient to meet the demand, we aim to intervene into the market for maintaining uniformity in price and controlling possible black-marketing," Shrestha told Republica.

Both NFC and NLTA said price of goats will be fixed few days before the festival begins.

BUS TICKET BOOKING FROM NEXT WEEK
The government and transport entrepreneurs are preparing to open bus ticket booking for passengers leaving Kathmandu Valley for Dashain celebration from next week.

Talking to Republica, Dolnath Khanal, president of Federation of Nepalese National Transport Entrepreneurs, said they were likely to open booking from the next week. "However, we will fix the exact date after holding final discussion with the Department of Transport Management (DoTM)," he added.

In the previous years, transport entrepreneurs used to open booking for bus tickets at least two weeks before the mega festival begins.

FAIR PRICE SHOPS FROM SEPT 17
The government is opening fair price outlets in 11 different places of Kathmandu Valley from September 17. These outlets, which will be operated by different public enterprises of the government, will be selling different essential goods at subsidized rates.

Ministry of Supplies (MoS), last week, announced a subsidy package for consumers in this festive season. Under the package, customers will get discounts of Rs 5 per kg on different varieties of rice, Rs 5 per kg on sugar and Rs 2 per kg on salt and Rs 10 per kg on ghee  at the fair price outlets.

The government has already reduced price of LP gas by Rs 50 per cylinders.

EXCHANGE OF NEW BANK NOTES FROM OCT 2
Nepal Rastra Bank (NRB) has said that general public will be able to exchange crisp bank notes for the festive season from October 2. The central bank will issue new notes to bank and financial institutions by September-end itself.

Rajendra Pandit, deputy spokesperson of the NRB, said an individual can exchange new bank notes worth up to Rs 37,000.

The central bank estimates that new bank notes of small denominations worth Rs 8 billion will be circulated in the market in this festive season.