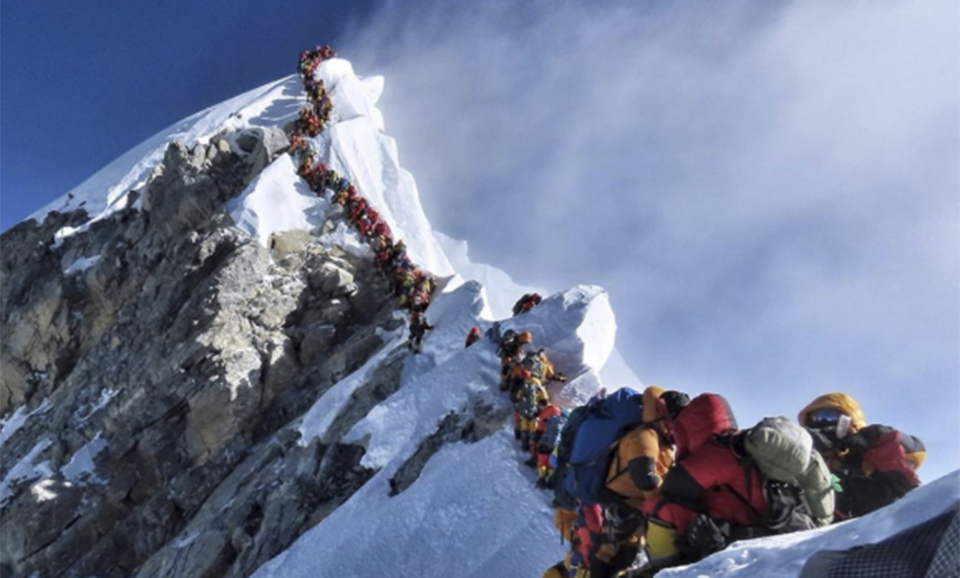 KATHMANDU, June 4: Expedition organizers have been charging up to Rs 10 million to bring back the body of a climber who dies on Everest. The expedition fee for the world’s highest mountain is just Rs 2.8 million (25,000 USD).

Businesspersons involved in the mountaineering industry have started worrying about the negative impact of expedition companies making huge profits from salvaging and bringing the bodies of dead climbers back to Everest Base Camp. The latest fatalities on the 8,848 meter peak have also exposed the failure of expedition companies to adopt adequate safety measures during expeditions.

Stakeholders point out that all this could do more to damage the image of mountaineering in Nepal than the ‘fake helicopter rescues’ scam that tarnished trekking in the Himalayas not so long ago. They suspect expedition operators of engaging in a ‘death’ business after seven climbers handled by a single company died on different mountains and the company exacted heavy amounts for bringing the bodies back.

“Deaths on Everest should be probed to find out if expedition organizers have been knowingly taking climbers to their deaths,” said an expedition operator.

Suspicions have been heightened after the same organizers demanded that they should also be allowed to handle the salvage of the bodies.

“All deaths on the mountains are not just accidents. This is happening because of low cost expeditions. Safety depends on the quality of the service delivered,” said the operator requesting anonymity.

According to Mira Acharya, director of the Department of Tourism, about 600 climbers topped the Everest summit this season. Eight of them died on Everest while one Irish climber who went missing during descent is also presumed dead.

Mountaineers themselves suspect overcrowding, slower climbers and longer stays above 8,000 meters behind more deaths on the mountain. International media have reported about the heavy traffic on Everest, but according to Sherpa guides, this only happened on one particular day.

“Delay by the Ministry of Culture, Tourism and Civil Aviation in issuing helicopter permissions to carry ropes and equipment to Camp 2 led to delay by ‘icefall doctors’ in fixing the climbing ropes,” a mountaineering expert said. “As most climbers headed to the summit on the same day when the weather cleared, they had to queue up.”

Expedition operators also said that in the absence of the line minister they had to struggle with red tape to get vital decisions taken.

The Sagarmatha Pollution Control Committee (SPCC) had completed the rope-fixing up to Camp 2 on April 2. But it took about 17 days to take the ropes to the top of Everest. Snowstorm blew off the tents at Camp 2 during the rope fixing.

Mountaineering insiders said most of the deaths were due to unskilled climbers and negligence by operators in maintaining quality. Due to unhealthy competition, operators have been taking climbers to Everest for just at 20,000 to 25,000 US dollars.

One expert who did not want to be named also said it is nothing short of extortion to demand up to 75,000 US dollars to retrieve the body of a dead climber when the same operator charges just 25,000 dollars as climbing fee.

According to sources, some expedition operators sought heavy amounts for retrieving the bodies of Indian climbers because the families were ready to pay up thanks to a decision of their governments to extend them support. Families also felt compelled to pay whatever they were asked because the insurance companies wanted proof of death.

Climbers have been also found to be insisting to reaching the summit to claim the grants and other facilities dangled by sponsors, irrespective of their physical weakness, high risks and warnings from Sherpa guides. Expedition operators for their part don’t hesitate to accept blame for taking unfit climbers toward the top.

“I turn back a climber who is found to be weak. Such a decision could result in a loss for my business but we should focus on human safety more than profit,” said Dawa Steven Sherpa, managing director of Astrek Group.

The government is forming a committee to study the problem, said Director General at the Department of Tourism Danduraj Ghimire.

Secretary of Nepal Mountaineering Association Tika Gurung said the rules should be tightened and both climbers and guides should exercise more caution. “Liaison officers don’t remain at the base camp and return after spending a single day there,” he also said

Passengers forced to pay higher fares for charter flights are requested to complain with documentary evidence
6 hours ago
Govt warns of action against those posting photos, videos in social media platforms without consent
5 hours ago