Dangers, Rhododendrons and the witch doctor 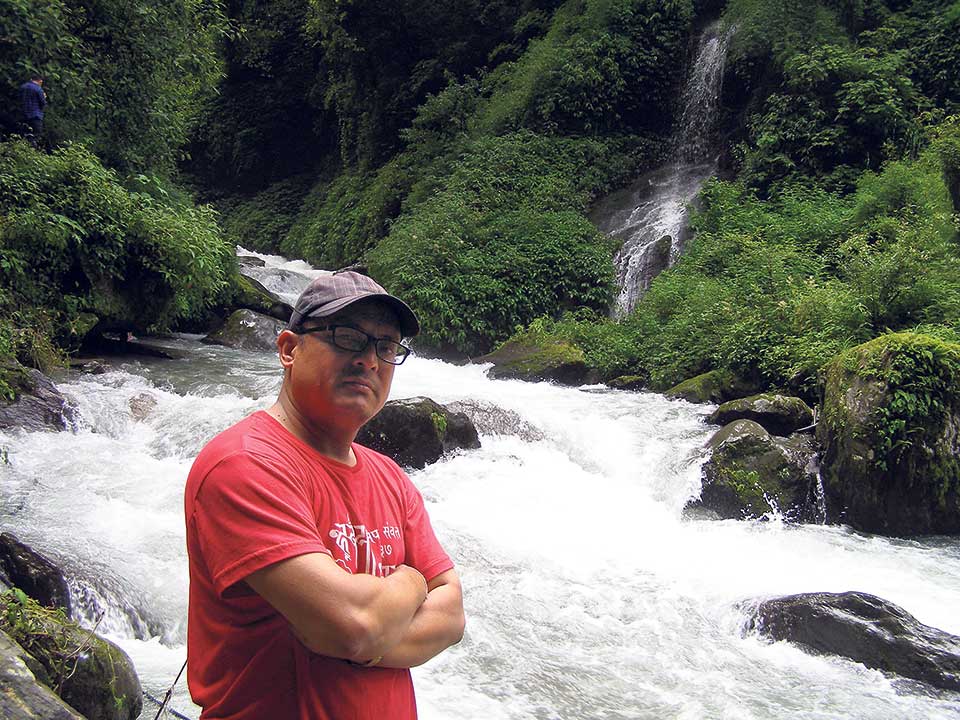 Rajan Lal Joshi is a lecturer at Patan Campus. He researches Newari folklore and teaches it to his students as well. But when he isn’t working, often he is on the road, travelling around the country and beyond.

“As beautiful as the mountains are, it’s not my personal favorite travel destination,” says Joshi, “I have realized that I don’t like isolated places. I prefer ones where you can meet and interact with people.”

Apparently, he takes notes about everything from lifestyles, cultures, to nature whenever possible. In this manner, he claims to have traveled to more than 50 plus districts in our country.  So, needless to say, he has many anecdotes and here with The Week, he shares some of the most memorable ones.

The first experience away from home
My first time out of the valley was for work. I was in my late teens and had just started out at a government office. They needed workers in places like Nepalgunj and Bhairawa so we were taken there as a part of the official team.

In hindsight, I realize how clueless I was about our country outside the capital. I hadn’t given any thought to different people and their culture. Even though I read a lot, it wasn’t as eye opening as that travelling opportunity.

Even though the trip was an enjoyable experience, I remember cutting it short after a storm hit the town I living in at that time. We were all caught off guard by the storm when we were on the street. So I ended up holding on to a tree. The wind was so strong that a jeep parked nearby actually turned around. I weighed only 43 kilos back then so the sight was terrifying. I genuinely feared being blown away. After surviving that, I didn’t exactly feel like extending my stay. Thankfully, my latter trips to Nepalgunj haven’t been that stormy.

The real near death experience
If anything, my travels have taught me not to make snap judgments. It’s important to evaluate the circumstances before taking any kind of action. I learned this lesson the hard way. This had to be during my early twenties. I was on a trip with two friends. Since vehicles weren’t accessible back then, we were walking from Baglung to Myagdi.

It was a fairly tough journey but, on the upside, we could take in the amazing beauty of the Kali Gandaki River throughout the route. It flowed down below the walking path and we were enjoying ourselves, that is, until we reached our destination and decided to take a bath in the river.

I acted rashly and decided to go for a swim rather than just take a bath. It took me just a couple of seconds to realize the true force of Kali Gandaki. It was unlike any river that I had gone swimming in and around our Kathmandu valley. There was no sand, just tons of slippery stones. I was instantly being thrown around. I also hit my right knee in the process and I knew that I was in big trouble.

I must have been in that state for five or seven minutes. I thought if I went any further down the river, they wouldn’t even find my body. My friends had started shouting as well. But, just then, a cow was swimming at the other end of the river. I noticed that it was swimming at an angle, not straightforward like I was trying to do. In desperation, I tried doing the same and it miraculously worked.

When I dragged myself back to the shore, my friends complimented my swimming skills. I didn’t say anything back then. I guess they hadn’t realized just how close I had come to dying.

The longest trip
I hadn’t planned it at all but this was the trip that turned into a book. I went to Ramechhap with a friend. It started out like any other travel but, somehow, we ended up walking half of the entire district in nearly a month’s span. The reason we chose to walk was the terrible roads. For somebody who was comfortably acclimatized to living in Kathmandu, it was sort of a test of character.

The most poignant thing was that the water was scarce. I still remember the thirst that we felt walking up and down the hills. There were only a handful of houses on the road back then but even they didn’t have water at their homes. When we asked what they drank, they would bring out homemade alcohol (kodo ko raksi). It would be before eight in the morning but that’s what they would offer. Eventually, we decided to give in and drank the alcohol as we walked through the various villages.

Acts like these certainly helps you get closer to the locals. As it is, people from the area were already incredibly hospitable. They would take us in their houses when there was no place to sleep. We talked like old friends and I took many notes. That’s where the inspiration for the book came from. I dedicated the published work to the people of Ramechhap.

Another memorable aspect of the trip was the Rhododendrons. I have fond memories of it. I vividly remember the flowers both in white and red covering the routes that we passed by. The flowers added to the already spectacular view. I think it was nature’s way of refreshing tired travelers.

The most emotional experience
This wasn’t a personal experience. It wasn’t tragic or exciting either. If I had to describe it, I would call it surreal.

When I was in Bardiya, a decade or so ago, the resort that I was staying in at the time informed me that the villagers were all gathering that night to witness a famous witch doctor (dhami) of the area. I obviously didn’t believe in these things but I was interested to see what it was all about. So I went along with everybody else.

During that particular instance, the dhami was called upon to treat a snake-bite. We saw the victim was lying on the ground, completely motionless, and was perhaps even unconscious. He made a huge fire and started to heat what looked like a big bunch of key tied to a steel wire until it was red hot. Then he started drinking alcohol and beating himself with the heated keys. Every now and then, he would also spit the alcohol on the victim’s wound. This went on for a good 45 minutes and then the victim woke up.

When it all started, I was silently scoffing people’s belief in these things but this particular experience was incredible. The energy around the area that night was inexplicable. It’s one of my most memorable travel experiences till date.

KATHMANDU, May 18: The Commission for the Investigation of Abuse of Authority (CIAA) on Friday lodged a case in the... Read More...

WASHINGTON, May 18: President Donald Trump lashed out at the appointment of a special counsel to investigate allegations that his campaign... Read More...