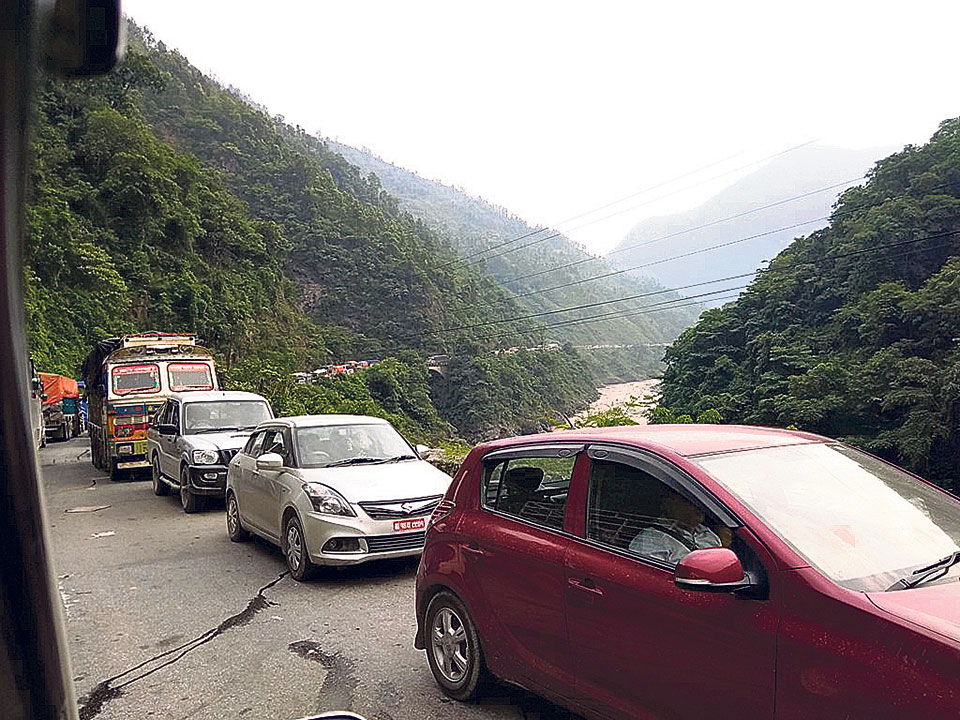 A long queue of vehicles waiting at Kurintar for the Narayanghat-Mugling road to reopen after a landslide on Tuesday. Photo: Sarita Shrestha/Republica

CHITWAN, June 28: It has already been three years since the work to widen the Mugling-Narayanghat road started. In the process of widening the road, the hill sides along the stretch were slashed away. But the landslides have not stopped ever since and the situation gets worse during the monsoon.

Passengers travelling via this road section are forced to face several hours of delays as landslides obstruct the road almost daily during the monsoon.

The road section has been seeing landslides every day for the past three days and the road remained closed daily between five hours to 11 hours during the past three days. On Wednesday, a landslide blocked the road at 6:30 in the morning and travelers had to wait until 11:50 am for the road to reopen.

Likewise on Tuesday, landslides at Topekhola disrupted traffic for around 11 hours. The landslide had occurred at around 5 in the morning but it was removed only at four in the afternoon. On Monday too, landslides at Jalbire, Kalikhola, Charkilo and Number 3 Bridge area had obstructed the road for eight hours.

Hari Bhujel, a microbus driver, said it took him 12 hours to reach Narayanghat from Kathmandu. “The road is good but recurring landslides have been a huge problem,” he said.

The situation was even worse last monsoon, Bhujel recalled. “I had to spend two nights on the road due to the obstructions caused by landslides. Things get very difficult during the peak rainy season months.”

Over half a dozen sections of the Mugling-Narayanghat road were widened by slashing away the hill sides. These sections see mudslide during the rainy season and dry landslides during the dry months. According to the Narayanghat-Mugling Road Project, 314 big and small landslides occurred in the road last year alone.

“Landslides have been more frequent than we had expected,” said Govinda Prasad Aryal, senior divisional engineer the project. “And landslides are occurring also in those places that were not marked as landslide prone.”

According to him, experts had marked 32 sites as landslide prone. Budget of Rs 140 million was allocated to take preventive measures at those sites. Works such as rock netting, rock bolting, and rock anchoring among others are still ongoing. Aryal said 60 percent of the work has been completed.

“We will begin landslide prevention work at those new sites once we are provided funds by the government,” he added.

The project office informed that around 93 percent of the road upgrading work has been completed so far. The project’s deadline has already been extended for four times and contractors are demanding yet another extension. Fertilizers will be provided to farmers: MP Dong
15 hours ago
Legal practitioners stage sit-in at the main gate of SC to bar suspended CJ Rana from resuming office
15 hours ago