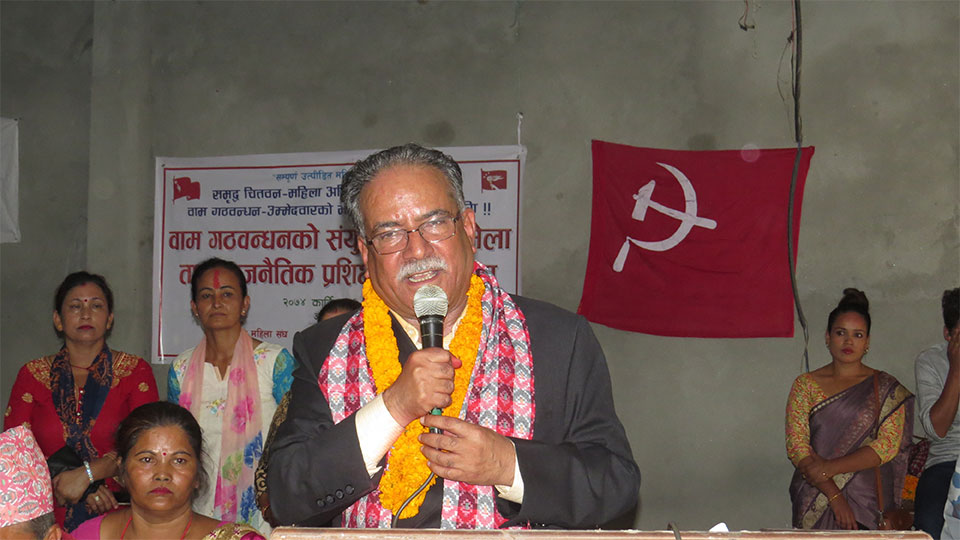 CHITWAN, Nov 15: CPN (Maoist Center) Charman Pushpa Kamal Dahal has vowed to provide houses to landless squatters and employments to the needy to garner support from the voters.

Issuing an election commitment paper on Tuesday evening, Dahal, a candidate for the House of Representatives from Chitwan Constituency 3 under the left alliance, has announced that he would provide 'Prachanda Housing' to those who do not have land and 'Prachanda Employment' to those who are below the poverty line.

Under the 'Prachanda Employment' project, as many as 50 jobs will be created in the next five years in the industrial, agricultural and transport sectors, according to the commitment paper.

“Such kinds of employments will target the needy families in Chitwan. Additional jobs will be created by implementing the existing projects and starting new ones,” reads the commitment paper.

Similarly, under the 'Prachada Housing' plan, the problem of landless squatters will be resolved by constructing a multi-story building in their vicinity.

Dahal has announced a special package for Madi area where he is contesting the elections from this time. The special package includes road, electricity, communication, etc. Dahal has vowed to connect Madi with other parts of Chitwan either through a flyover or underground subway.

Madi is a far-flung area often plagued by natural disasters and poverty where people are losing lives and property every year.

Dahal has put forth a sketch of a metro city plan by unifying all the seven local units of the district in his commitment paper. He has also vowed to upgrade Meghauli-based airport and Bharatpur-Meghauli road section.

Building three bridges over the Narayani River, widening ring road by building a barrier along the Rapti River, and constructing international stadium at Saradanagar are other promises made by Dahal in his commitment paper.