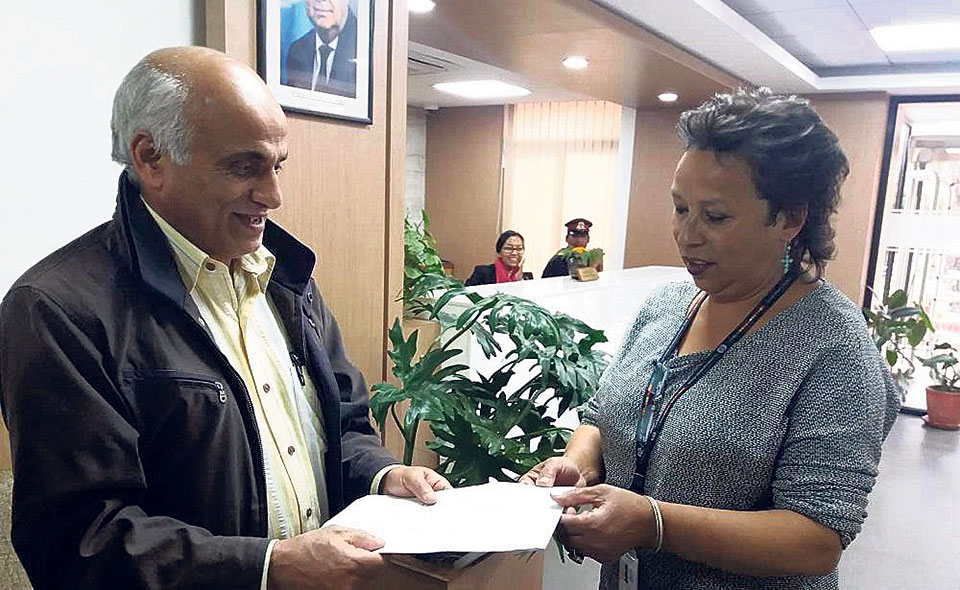 Dr Govinda KC presenting a memo to the UN High Commissioner for Human Rights through a UN official at the UN House in Lalitpur Tuesday demanding action against those involved in war crimes.

KATHMANDU, March 20: Nepal Communist Party (NCP) Chairman Pushpa Kamal Dahal will face ‘no trouble’ in the US even as a complaint has been filed with the Federal Bureau of Investigation (FBI) against him as a ‘terrorist’,  diplomatic sources said.

The sources said filing a complaint with law enforcement agencies including the FBI does not mean that anything will be done. “Former prime minister Dahal had decided to go to the US for the treatment of his wife following an assurance from US officials that he would not have to face any trouble. So, any such complaint does not carry much importance,” the sources said.

Sources said the US authorities have separately issued a ‘no investigation’ circular concerning Dahal — the former rebel leader who led the Maoist armed insurgency in Nepal—to ensure that he would not face any trouble during his stay in the US. US officials in Kathmandu, however, could not immediately confirm if such a circular was issued in the aftermath of the complaint lodged by Tilak Shrestha of Kentucky State University.

A similar circular was issued when Narendra Modi, who was once banned from the US over his alleged involvement in the Gujrat massacre, visited the US as prime minister of India a few years later. “Anyone can make a complaint to law enforcement or the FBI but that does not mean anything will be done. There is a due process in place,” said a diplomatic source.

In his letter to the FBI, Shrestha, a research associate at Kentucky State University, urged the US government to consider America’s stand on terrorism, its moral values and internal and international legal obligations regarding terrorism, as Dahal visits the US. Stating that Dahal was previously on the American terrorist list, Shrestha maintained that the insurgency led by Dahal resulted in the death of 17,000 poor Nepalis.

Dahal and his wife Sita along with their daughter Ganga and son-in-law had left for the US on Sunday evening for Sita’s treatment at Johns Hopkins Hospital in Baltimore. Sita’s health has deteriorated following the sudden death of her only son Prakash in November, 2017 from a cardiac arrest. Doctors have diagnosed her with Parkinson’s and other mental and physical illnesses.

Among other things, they have demanded that the transitional justice mechanisms formed in Nepal should meet minimum international standards to ensure justice to the families of those who were killed or suffered in various other ways at the hands of the Maoist rebels or state security forces.