Dahal steps down as promised 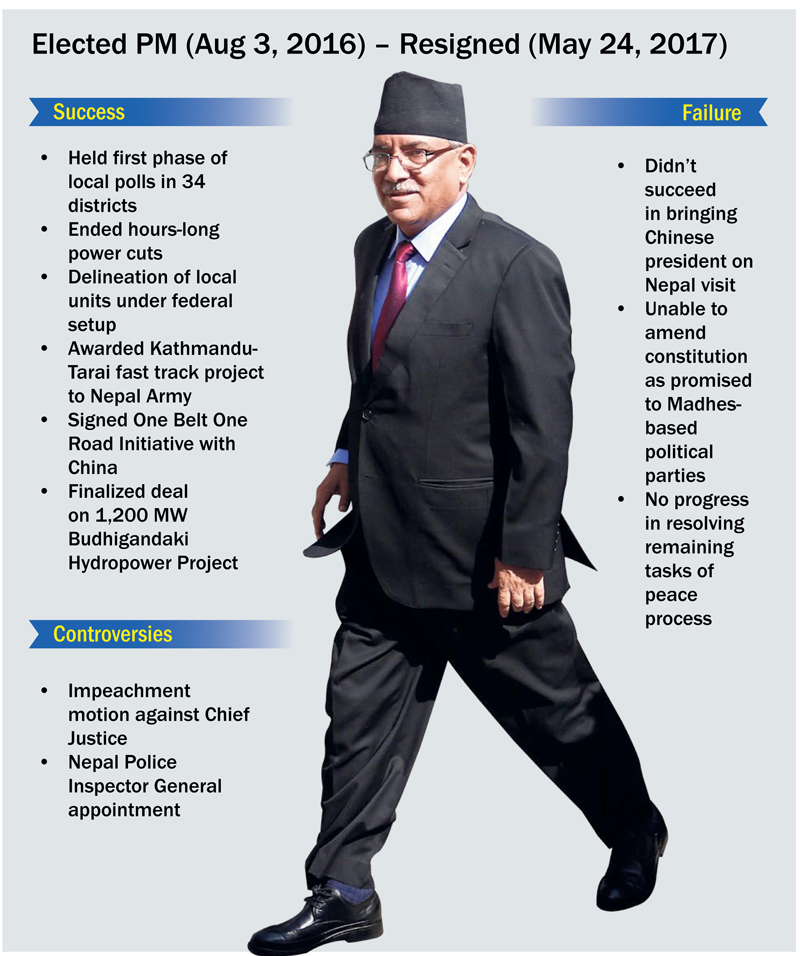 KATHMANDU, May 25: Prime Minister Pushpa Kamal Dahal resigned on Wednesday, paving the way for the major ruling coalition partner Nepali Congress (NC) to form a new government, as per the agreement reached with the party at the time of his election to the post.

Addressing the nation from his office at Singha Durbar, Dahal announced and subsequently submitted the resignation to President Bidya Bhandari at her office in Shital Niwas.

President Bhandari approved Dahal's resignation on the same day just five days ahead of the annual budget date and three weeks ahead of the second phase local polls in the remaining 41 districts in the country.

“I have promised to break the long standing tradition of lack of morality in Nepali politics. Thus, I am going to announce my resignation without any hue and cry,” said Dahal. “None of the power sharing deals has been implemented in the past resulting in mistrust among the political forces.”

Dahal-led CPN (Maoist Center) had agreed to hand over government leadership to the NC when Dahal was elected as the Prime Minister in August last year. According to the political understanding, the Maoists will support NC President Sher Bahadur Deuba to form new government which will hold the provincial and parliamentary elections within the constitutional deadline of January 2018.

Dahal was elected the 39th Prime Minister of Nepal on August 3 in 2016 with backing from the NC, the largest party in the House, agitating Madhes-based political parties and some other fringe parties.

Although Dahal had planned to announce his resignation addressing the parliament meeting, he changed the plan after the main opposition CPN-UML decided to obstruct the House, protesting against the government's decision to increase the number of local units. Dahal wanted to answer the opposition UML in parliament where his predecessor K P Oli had raised some important questions about his successor's tenure while announcing his resignation after the NC and CPN (Maoist Center) registered a no-confidence motion against him ten months ago.

Recalling those questions, Dahal during his address to the nation on Wednesday, said that his government ensured the construction of the fast-track linking Kathmandu with tarai, expedited the construction of postal highway linking inner cities of Tarai-Madres and signed the Belt and Road Initiative agreement with China despite doubts from the opposition.

“Questions were raised when I was contesting for the Prime Minister's post in parliament. Though the questions were not wrong, the intention behind them was not right, either,” said Dahal. “But my government ensured the construction of the fast-track which remained merely an issue of political treachery and could never become a priority for any government.”

Stating that he had assumed office at a time when the elections were uncertain and the country witnessed a low economic growth rate, low development indicators and long hours of load shedding, Dahal claimed it was his achievement to overcome such situations.

Dahal mentioned the successful holding of the first phase of local polls, end to load-shedding, accelerating the economic growth rate, progress on post-quake reconstruction and rehabilitation process, decision of the government to entrust Nepal Army for building the fast-track, signing OBOR deal with China, revitalization of closed government factories, announcement of new policies and programs for health and education sectors as his major achievements.

Accusing previous governments of only selling dreams to the people, he also claimed that the country's economic growth is projected at 7.5 from 0.8 when he assumed office. “We are going to produce 200 MW of electricity in a year, 600 MW in two years and 1,200 MW in three years,” he claimed. Dahal also said that the Melamchi Drinking Water Project will be completed by the next Dashain festival because of expedited work during his government.

Dahal further stated that his government maintained balanced relations between the two giant neighboring countries. “Our foreign policy was based on emotions rather than wisdom before my tenure. This government has maintained balanced relations with the two neighboring countries at political, diplomatic and people-to-people level,” said Dahal. He was of the view that his government played a significant role in restoring harmony between tarai and hills.

Suresh Basnet steps down from KUKL board

KATHMANDU, March 22: The immediate past president of Kathmandu Upatyaka Khanepani Ltd (KUKL) has resigned from the KUKL board of directors. Read More...