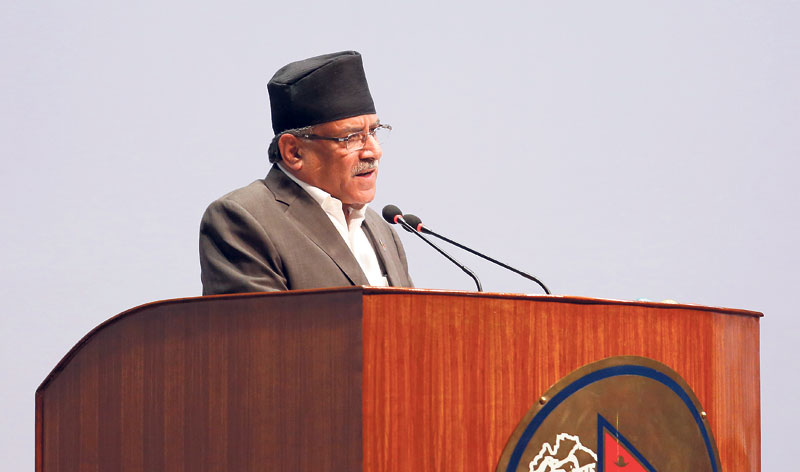 KATHMANDU, Oct 20: Prime Minister Pushpa Kamal Dahal has promised to forge agreement among the ruling, opposition and agitating political parties for making amendments to the constitution by the first week of November.

The prime minister expressed such commitment in parliament meeting on Wednesday at a time when the agitating Madhes-based political parties have threatened to withdraw their support to the government and take to the streets again if the constitution amendment bill isn't registered in parliament before the end of the festival season.

Addressing the parliament meeting, Dahal said that he has been holding both formal and informal talks with the agitating parties and opposition leaders to forge political understanding on constitution amendment.

"The draft of the constitution amendment bill is in the final stage of preparation and I assure one and all that a consensus on the contentious issues among all the stakeholders will be reached before Chhath [November 6]," said Prime Minister Dahal while addressing the parliament meeting.

During his 40-minute address to parliament, the prime minister reiterated that his priority is to make the constitution widely acceptable and create environment for the elections as per the constitution. He also described those tasks as major political challenges in the days ahead.

Constitution amendment, implementation and laying the grounds for elections cannot be considered the tasks for the ruling parties alone and should not become an issue dividing the ruling and opposition sides, he said. "So it's right time for all the parties to stand united once again like we did during the earthquakes and protect face the challenges to protect the country from a possible political disaster," he said. "If we cannot hold the elections on time, the country could slip into a serious constitutional crisis."

Only around 15 months remain for the constitutional deadline [January 21, 2018] to hold all three elections--local, provincial and national. Political parties are divided on the issue.

He informed that the election-related bills have already been registered in parliament.

He also said that the government was taking initiatives to forge consensus among the political parties on the restructuring of the local bodies as well.

Prime Minister Dahal highlighted the activities of the government, progress made on the government's plans and policies and his recent India visit, during his address to parliament.

He described the informal meeting with Chinese President Xi Jinping and Indian Prime Minister Narendra Modi while attending the Goa BRICS-BIMSTEC Outreach Summit as a moment of pride for Nepal. He termed the trilateral meeting as a 'rare opportunity' to discuss common issues of the close neighbors.

"Though the meeting was utilized as an opportunity in the utmost interest of Nepal, I am surprised to see unnecessary criticisms from various corners," he said.

KATHMANDU, Oct 19: Prime Minister Pushpa Kamal Dahal has said that the government is working on forging an agreement among... Read More...