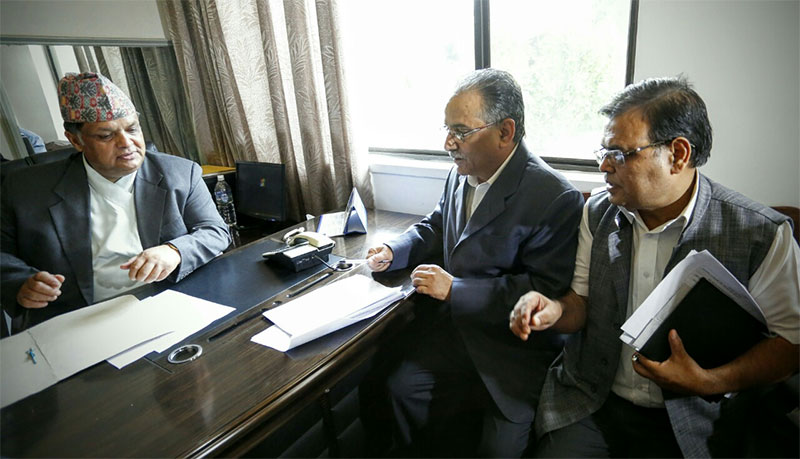 KATHMANDU, July 14: With the official decision of the Nepali Congress  to support CPN (Maoist Center) Chairman Pushpa Kamal Dahal in forming a new government under his leadership and the registration of a no-confidence motion at the parliament secretariat against the prime minister on Wednesday, the NC and the Maoists have made clear the course ahead.

With the NC, the largest party in parliament, signing a written agreement to support the chairman of the Maoist Center, Dahal is most likely to become the next prime minister unless there is a dramatic change in the political scenario in the next few days.

A joint meeting of NC’s Central Working Committee and its parliamentary party decided to support the CPN (Maoist Center) in forming a new coalition under its leadership, and to register a no-confidence motion against Prime Minister KP Sharma Oli.

Dahal proposed the no-confidence motion and NC President Sher Bahadur Deuba seconded it. A team from the NC and the Maoist Center led by Dahal reached the parliament secretariat to register the motion.

With this development, the two major political parties have formally kicked off the process of toppling the present government and forming a new coalition. Until Tuesday, NC leaders were tightlipped over the leadership of the new government.

“We are compelled to register the no-confidence motion against the prime minister as he did not pave the way for the formation of a new government by stepping down voluntarily even after being reduced to a minority,” NC chief whip Chinkaji Shrestha told reporters after registering the motion.

However, officials said the prime minister and other leaders from the ruling parties have for now focused on getting the annual budget endorsed by parliament, and they would then decide about facing the no-confidence motion.

Though parliament has already passed the Appropriations Bill, it has yet to endorse two other related bills.

“We are now concentrating only on getting the remaining bills of the annual budget endorsed. We will decide what to do about the no-confidence motion only after getting the budget passed,” Bishnu Rimal, the prime minister’s chief advisor, told Republica.

As per the constitution, at least one-fourth of the members of parliament (151 lawmakers) must sign up to lodge a no-confidence motion against a prime minister.

In the motion, NC and the Maoists have maintained that they had to make this move as the Oli-led government  failed to address the ongoing agitations launched by Madhes-based and various other groups. They also accused the prime minister of not taking any initiatives to make the new constitution widely acceptable to the general public.

The NC and the Maoists in their motion also accused the prime minister of failing to take the peace process to a logical conclusion, expedite the task of earthquake reconstruction, ensure good governance and maintain friendly and balanced relations with neighboring and other friendly countries.

According to parliamentary regulations, it takes seven days for a no-confidence motion to mature and advance onward.

Seven days after registration, the speaker will issue a notice to all lawmakers about the date for discussions on the issue at a House meeting.

After discussions on the motion, the prime minister or his representative will answer questions raised in the motion and at the House meeting.

If the motion is not withdrawn after the prime minister’s answers, the speaker will table the motion for a decision.

The decision will be taken through a vote division in the House. If a majority of lawmakers vote in favor of the motion, the prime minister will be automatically removed from his post.

After the prime minister steps down voluntarily or is removed through voting, the political parties will be given seven days to form a new government based on political understanding.

In the event of the political parties failing to forge consensus on a new government leadership, parliament will initiate procedures for electing a prime minister through voting.
An aspirant must be a lawmaker and must secure a majority vote in parliament to be elected as head of the government.

As the  largest political party in parliament, NC has already signed a written agreement to vote Dahal for prime minister, the former rebel Maoist leader is almost certain to become prime minister for a second.time.

He was prime minister for nine months in 2008.