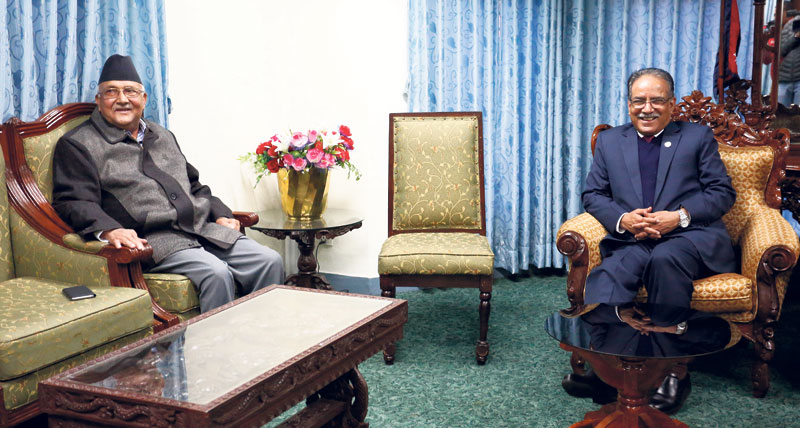 Leaders close to him said that the prime minister has expedited his efforts with a view to register the amendment bill in parliament by mid-November.

“When the prime minister sought his consent, main opposition leader Oli gave a positive response with regard to constitution amendment,” said Dahal’s press advisor Govinda Acharya after the meeting held at Singha Durbar.

Both leaders, at the meeting, reached an understanding to hold meeting between the three major political parties within a few days to discuss the content of the amendment, said Acharya.

However, UML Chairman Oli while emerging from the meeting said he does not know about the details of amendment proposal.

“What amendment? Why and on what provision?” quipped Oli when asked if they had reached any understanding on constitution amendment. Oli said that the two claimed that he discussed with Dahal just the current political affairs.
Meanwhile, Dahal also held separate meeting with NC President Deuba and discussed the amendment issue.

The government has been working on the constitution amendment draft to make changes to provincial demarcations and citizenship provisions. Sources said the ruling leaders are in a mood to resolve the ongoing disputes by forming a commission to settle the provincial boundary dispute and resolve the disputes on citizenship criteria by retaining the provision of the Interim Constitution (2007). Similarly, the leaders also want to entrust the Language Commission with the responsibility of finalizing the languages of official business.

“By forging consensus with other major political forces, the prime minister has been working to register the amendment proposal by mid-November,” said Acharya. Dahal has stepped up the initiatives at a time when the agitating Madhes-based political parties have warned of launching fresh agitation if the government failed to register constitution amendment within a week.