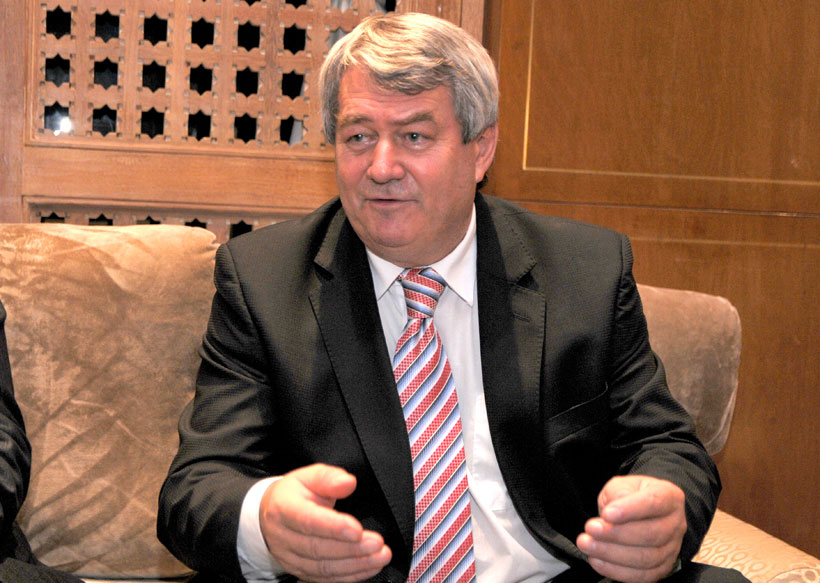 A high-level delegation led by Vojtech Filip, Vice President of Parliament of the Chamber of Deputies of the Parliament of Czech Republic, was recently in Nepal on a four-day visit. During the visit, the delegation, which included legislators of the Czech parliament, met with Speaker of the legislative parliament, various ministers, senior officials of different ministries, and private sector leaders, among others. The high-level visit was aimed at helping toward defining steps for achieving a new legal framework for the relationship between two countries which established formal relationship in 1993. Talking to Sagar Ghimire of Republica, Filip talked about bilateral relationship, economic and business scopes between the two countries and impediments to flow of investment. Excerpts:

What is the purpose of your visit to Nepal?
There are not any unsorted stories between Nepal and the Czech Republic. Our relationship is very friendly. The objective of the visit was to define the steps that will help us to achieve a new legal framework for our relationship. In January last year, we concluded an agreement between the Czech Republic's Ministry of Industry and Trade and Nepal's finance ministry. On the basis of this agreement, a joint inter-governmental commission has been established that will evaluate how we can promote and expand our relations. And, we agreed during this visit that the commission shall meet before the end of the year and the meeting shall take place in Prague. The objective of the meeting will be to establish a new contractual framework for the protection of investment and avoidance of double taxation. The framework will be very important for the Czech companies that want to come and invest in Nepal or that want to come and establish joint ventures in Nepal. And, of course, we also want to promote the relationships on the area of tourism. We are definitely interested to increase our economic presence here in Nepal. But, we are also equally interested in having more products of your country origin to expand consumers' choice in Czech Republic.

How has the bilateral tie evolved since Nepal and Czech Republic established diplomatic relations in 1993?
The bilateral relationship is even older as diplomatic ties between Czechoslovakia and Nepal goes back to 1950s. The major achievements of our bilateral relationship are the promotion of our commercial exchanges, increase of Nepali exports to the Czech Republic and also increase in import from the Czech Republic to Nepal. For example, we can say that there has been an increase in the exports of Czech Republic's products such as mechanical engineering products to Nepal. Skoda now has its agency here which has boosted the sale of Skoda cars in the Nepali market. We can also mention here the sale of Czech aircraft L-410 that is used in Nepal for short distance flights. We have helped the authorities here to reach out to the remote areas to increase regional connectivity through these aircraft. We have been able to increase awareness of each other. That's a very important point. We have been able to promote people to people contact. Czech Republic was among the countries which sent one of the largest rescue teams to Nepal after the earthquakes of 2015. We have a number of non-governmental agencies helping the authorities to promote social objectives in a number of areas. We have a dozen of Nepali students who major their study in Czech Republic.

What are the impediments that you see for expanding your business interests in Nepal?
The major obstacle is the lack of bilateral agreement between two countries. In this sense, it is a challenge for the parliament and also for the ministries in charge. Once we have the agreement on the protection of investment, we will be able to increase investment which means there will be more jobs for people. There will be more people coming to Czech Republic and more Czechs coming to Nepal. Both the countries have companies which are keen to work together which is our major asset. It is also about transparency and predictability of the economic environment in which they operate. Czech companies are keen to invest time to understand the priorities of authorities here. And, based on that, they will see on what extent or what they should or eventually could do to become the part of this priority. From that perspective, it's so important that we are able to increase contact at all levels including inter parliamentarian, inter government and inter business. It's important that we put in place a mechanism that would help us identify the areas in which both countries would be ready to work together. On one side there would be need of Nepali economy, and on the other the potential and capacity of Czech companies. We have to interconnect needs of one side and possibilities and capacity of other side.

What are the possible areas and scope of business and investment that Czechs might be interested in Nepal?
There is enormous potential in tourism in Nepal. Czechs would love to come to Nepal to see Himalayan peaks. The number of tourists from Czech Republic coming to Nepal is increasing every year. It would mean a challenge for Nepal to provide sufficient guides for Czech tourists. Nepal is a really a power when it comes to production of textile. On the other hand, Czech Republic is a major producer of textile machinery which is recognized all over the world. Hopefully, our Ministry of Industry and Trade will sign needful agreements so that Czech businesses can supply machineries to Nepali companies to produce textiles and import Nepali textile products to Czech Republic. This could be a win-win situation for two countries.

There are other sectors like energy and hydropower as Czech Republic has distinguished itself for having high-level professionals of local companies with leading technologies like thermal and renewal energy. Czech Republic has practical experience on these areas. Food processing industry is another area of business scope. We have the potential. What is needed is to add value, and not to export raw materials or commodities, but processed agricultural products. Water treatment is another potential area.