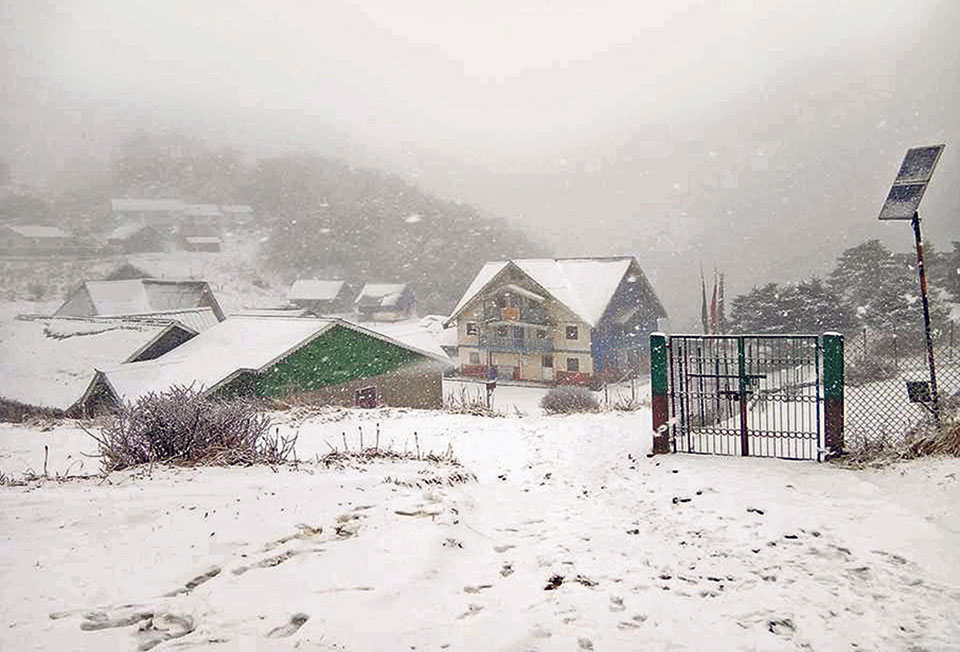 A snowed-out Sandakpur in Ilam pictured on Tuesday. The area has seen heavy snowfall since Monday night. Photo: Ganga Parajuli/Rss

KATHMANDU, Dec 19: Cyclone Phethai that recently caused frigid weather across Nepal has now weakened into a ‘depression’ state and is dissipating rapidly. With this, the Meteorological Forecasting Division expects the cloudy skies to clear on Wednesday in most parts of the country.

The impact of the cyclonic storm was felt especially in the eastern and central regions of the country and some areas in the west. On Monday, Kathmandu Valley’s minimum temperature had reached 2.5 degrees Celsius – the lowest of this winter. Likewise, Jumla’s temperature had dipped to -6 degrees Celsius while Jiri and Jomsom also took the brunt.

But the intensity of the cyclone diminished after its landfall at India’s Andhra Pradesh. As a result, Tuesday’s weather across the country saw minor improvement despite being cloudy. Traces of rainfall were recorded in a few places including Biratnagar and Dharan on Tuesday.

The clouds formed by the cyclone had entered Nepal from the east on Sunday. The MFD said it is now gradually making exit from the western part of the country.

“The eastern region will remain partly cloudy on Tuesday but skies would be clear in other areas,” informed meteorologist Sujan Subedi of the MFD. “As per our forecast, there will be no disturbance on the weather on Thursday,” he added.

The Indian Meteorology Department has forecast that the cyclone will fully weaken by Tuesday morning. Various Indian news agencies reported that the cyclone claimed two lives in Andhra Pradesh.

KATHMANDU, Dec 17: Cloudy skies and light rain and snowfall at a few places across the country have been forecast... Read More...

KATHMANDU, June 22: Rainfall is taking place in almost all parts of the country today as the monsoon remains active.... Read More...

Weather gets colder as mercury drops

KATHMANDU, Jan 28: Today was colder as the minimum temperature was less than that on Sunday, the Meteorological Forecasting Division... Read More...