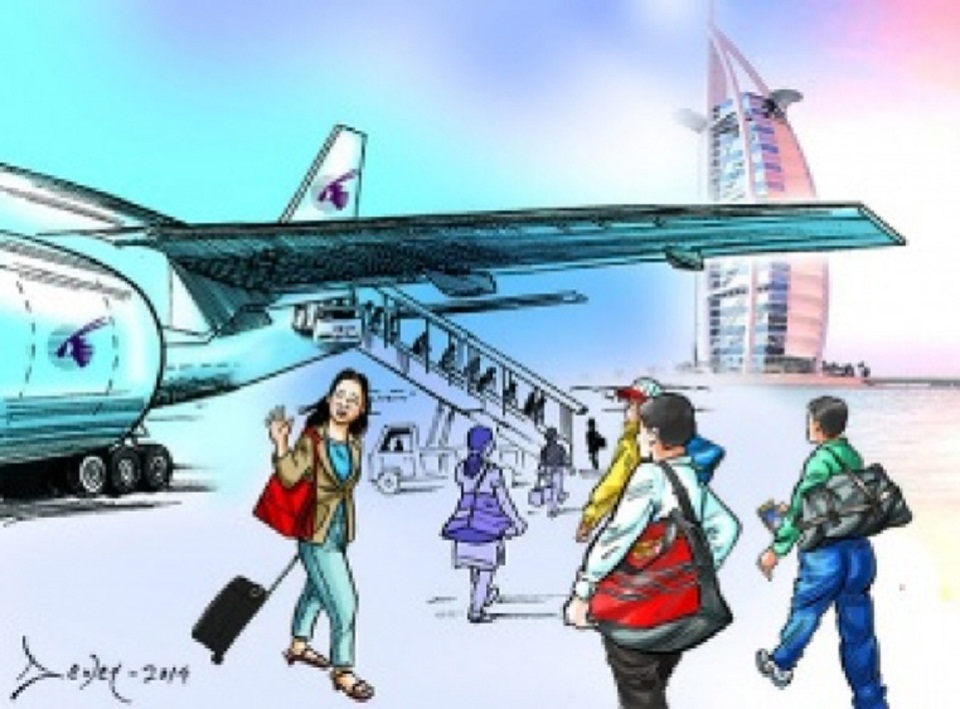 The rule proposed by Department of Immigration tries to force the patriarchal vision of society onto women through the fabric of legislation. This policy is based on classification of sex.

On Feb 10, the Department of Immigration (DoI) of Nepal submitted a notorious proposal to the Ministry of Home Affairs that states that a woman must obtain permit letters from their male counterpart or the head of the family as well as the ward office in order to travel abroad. The proposed rule was said to be applicable to first time woman traveler below 40 traveling to Gulf or African countries on visit visa.

Article 18 of Constitution of Nepal confers powers on the government to make special provisions by law for the protection, empowerment or advancement of the women lagging behind socially and culturally. Nevertheless, curtailing the right to liberty based on classification of sex, under the guise of protective measure is simply not justified. Measures of protection can be core mechanism of oppression when provided with special treatment. Such protective measures reinforce the patriarchal structure and social hierarchy which labels women weak and in need of protection and assistance from their male counterparts.  Law and policy makers must realize that women need protection from societal customs, practice and their rigid ideology which lays its emphasis on vulnerability of women instead of concentrating on their capabilities. There is an urgent need of reassessing this ideology from a constructive angle which goes beyond the widespread approach of "woman as a victim of her gender”.

This proposed rule not only reeks of misogyny in the fabric of protective measures but also lacks sophisticated investigative techniques and resources to check the human resource recruiters’ and agencies’ credibility.  A report published by US State department on Trafficking in Persons in Nepal 2020 states that traffickers bribe government officials to include false information in genuine Nepali passports and provide fraudulent documents to prospective labor migrants or foreign employment agents.  Under false promises of education and work opportunities, some Nepali parents give their children to brokers who instead take them to frequently unregistered children’s homes or private housing and force them to pretend to be orphans to garner donations or employ them in the entertainment industry. It’s not a hidden fact that human trafficking mafia maintain close relations with police and politicians to facilitate their nefarious trafficking activities. This rule may further benefit traffickers where they could traffic in more relaxed and carefree way as there are loopholes very evidently visible if we take cognizance of the nexus the trafficking mafia has.

Imposing state’s will on a woman as a solution to prevent trafficking is not a solution in itself. Rather, it looks like the government is trying to shy away from its responsibility by shifting the burden on the families and judging the victims and survivors of prostitution rather than questioning the traffickers. No reasonable human would want to knowingly fall into prey of traffickers, be sexually exploited and abused. What if, a woman falls prey to the trafficker despite all the measures? In such a situation will the government bear the responsibility to fund repatriation for the victims overseas and prosecute the agency and hold perpetrators criminally accountable? This is a major question unanswered so far from the fine print of the legal text.

Human trafficking is a global anathema and the victims of human trafficking are not limited to women. Nepali men, women, boys, and girls are subjected to sex trafficking in Nepal, India, the Middle East and sub-Saharan Africa in dance bars, massage parlors, and cabin “restaurants,” a type of brothel.  The Trafficking in Person report published by US State Department in 2020 for Nepal stated that,  male trafficking victims and transnational labor trafficking victims remain unnoticed due to lack of protective mechanism designed for men. Article 18 of the Constitution of Nepal states that no person shall be denied the equal protection of law. Human trafficking is a global issue, victims of human trafficking are not limited to women, men are equally affected by it. Therefore, imposing protective requirements on women but not on similarly situated men is denying men equal protection of law and is violation of Article 18.

Patriarchy is defined by “rule of father or man”. The most commonly accepted definition of patriarchy is the social structure of society based on the father having primary responsibility and authority over their families. Patriarchy is dangerous because it classifies women as a separate variable based on sex. Such classification is an indicative of the statute putting a woman at a lower pedestal than man. Patriarchal ideology is based on widely accepted values, beliefs, myths, and justification of an act which is morally considered to be acceptable amongst the majority of the population. When an ideology is popular amongst the majority, it helps in maintaining an unjust social order and inequality by convincing people that existing social hierarchy of gender and social arrangement is naturally designed and acceptable natural order.

Even though the idea and motivation behind this policy aims to provide protection to women this in the long run will limit their autonomy. This policy is just an additional form of oppression in an already oppressive society.  This is further going to aggravate the pre-existing social, cultural, and economic challenges faced by a woman in a male dominated society. This proposed rule is trying to force the patriarchal vision of society onto women through the fabric of legislation. This policy is based on classification of sex instead of a rational basis despite the well-known fact that male migrant workers are also victims of sex trafficking, exploitation, and abuse.

This policy is unconstitutional because there is no reason why a male migrant worker does not need any extra protection than similarly situated female migrant workers. Such protective measures will be accepted, respected and appreciated only if it is redirected in attaining a larger goal of security for all distressed humans and not charity-like support bestowed under the assumption that women are “helpless” and are in need of extra protection.